By OREKOYA (self media writer) | 8 months ago 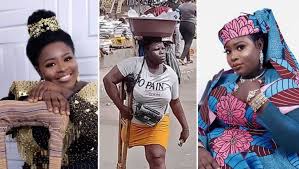 Reliable news reports have comfirmed that the Lagos State Government has handed over Mary Daniel, the amputee sachet water hawker,to the leader of the Igala people in Lagos State.

Princess Aderemi Adebowale who is the incumbent Special Adviser, Office of Civic Engagement,while handing over amputee sachet water seller,disclosed that the Lagos State government would continue to protect all persons ,especially the vulnerable in the state

It can be recall that Miss Daniel,whose alleged situation had initially attracted vira attention, majorly in the social media platforms,has been in the protective custody of the State government in the last 2 weeks.

The special adviser revealed that the government decided to protect the viral hawker from likely scammers who might go after the money donated to her by Nigerian citizens.

She made it known that the main objective of the state government was to make sure that the viral lady becomes a responsible citizen.

Adebowale said in quote:"She now has the resources to take care of herself and her baby and have a new lease of life”.

Moreover,it is understood that Daniel was delivered to a Committee made up of the agents of the Ministry of Justice, Ministry of Youth and Social Development, a Non-Governmental Organization (NGO) and the Leader of Igala community in Lagos State, Mr. Sanni Yakubu Ejima.

It was reported that the handing over process took place in the presence of the Divisional Police Officer, Alausa and representative of the Commissioner of Police, Lagos State Command.

She went further to state that the police were invited to send a signal that the state truly catered for Daniel while in the custody and to put safety measures in place for her.

The Special Adviser also disclosed that the essence of the Committee is to monitor Daniel’s reintegration into the society and to make sure that the donated money was rightly used for Daniel's standard of living and that of her little child.