How man was arrested for holding pistol, bullets at residential area in broad daylight

What could a young man be doing with a locally-made pistol with two bullets which he held in broad daylight is a mystery policemen of the Delta State Police Command are trying to unravel following the arrest of the 24-year-old man, the command announced on Thursday, September 23.

The man, whose name was given as Daniel Banjo, said to be residing at Number 3, Baptist Mission Street, Agbor, was said to have been arrested by men of the Operation Delta Hawk of the state police command following a tip-off from residents that he was found holding a locally-made pistol with two bullets in broad daylight.

This prompted policemen to race to the area and to their surprise, they also saw him with the said pistol and bullets. He was promptly arrested and taken to the divisional headquarters, Agbor.

Upon interrogation, he was said to have refused to tell the policemen where he found the pistol and how he came about the bullets, prompting the policemen to detain him. 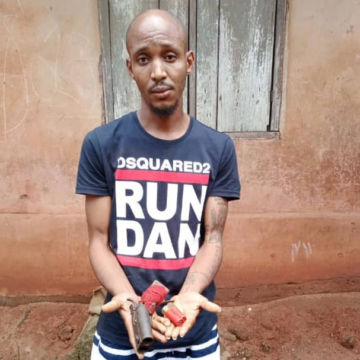 The policemen added that more investigations are ongoing about how he was able to get a locally-made pistol and who probably sold the pistol and bullets to him.

The report of the incident was contained in a statement by the state police command through its Public Relations Officer, Bright Edafe, which added that policemen are also looking into the possibility that the young man bought the pistol from some gun manufacturers in the area.

"They promptly swung into action and proceeded to the area where they arrested the man who was still going about with the pistol. The locally-made pistol and the two live bullets were recovered from him.

"During interrogation, he refused to reveal where or how he got the pistol and bullets. More investigations are ongoing."