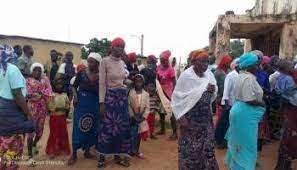 THOUSANDS of individuals displaced by recent raids and sackings of multiple hamlets in the Jebbu Miango and Irigwe chiefdoms of Plateau State's Bassa Local Government Area have pleaded for assistance to feed, clothe, and shelter themselves when the rains arrive.

Sanitary items are required for women and girls, as are medical interventions to prevent illness outbreaks. The hygienic conditions of those camped in open places in the chiefdom's Miango and Kwall districts also demand quick attention.

When Arewa Voice went to the communities, it found Jebbu Miango and the surrounding areas vacant. They pleaded for urgent support from all people of goodwill at the ECWA, Bishara1, Miango, and the palace of the Brra Nggwe Rigwe (Paramount Ruler of Irigwe), Ronku Aka, where some of the displaced persons were seen, stating that they had been abandoned by the government.

After the latest terrible attack on her community and the burning of her home and means of income, one of the victims, Martha Avia, said she was left with no shelter, food, or accommodation.

“We don’t even have the means to go home and where to lay our heads if we eventually find our way home because of the rising security threats along the way,” she said.

Monday Garba, Ward Head, Mararaba Tipper, Jebbu Miango, said, "We want the government to help us, to push the security to intervene since Fulani herders have destroyed all of our farmland." Cattle graze on our crops at all hours of the day and night. This evil practice must come to an end.”  Monday Hodus, another victim, claimed, "They assaulted and burned down the entire Jebbu-Miango community, murdering many of its residents and destroying our farmlands."

Gastro Barry, Chairman Relief and Intervention Committee, who narrated the series of attacks in the chiefdom since 2001 stated: “This year, 2021, it took on a totally different dimension,”.

As I speak with you, 39 communities have been displaced, 700 people have been killed, and 55 people have been injured and hospitalized. “The number of residential rooms, exclusive of food barns, kitchens, and stores, damaged is above 3,000,” says the report. Many displaced people have sought safety in the chiefdom's Miango and Kwall districts. Several people have relocated to Jos and Bukuru. Because of the suddenness of the event, they were unable to move out food and clothing, causing families to go hungry. Some people have been injured by gunshots and are in hospitals; Bill need to be settled, and they require medical attention. Issue of finding a place to stay is also a problem. We haven't gotten any help from the government. We begged the clinics to be patient with us.”

“What happened in Irigwe land moved our heart,” said Rev. Gideon Para-Mallam, who joined other officials of the Gideon and Funmi Para-Mallam Peace Foundation to see things for themselves and deliver relief goods to the victims.

Although we attempt to promote peace in this local government area, it can be difficult to get people to talk, especially when they are in a moment of need and you are unable to provide the assistance that they require. We discussed it and decided that we should provide some assistance. Many individuals have been displaced from their houses, with nowhere to sleep and little food to eat.

“We brought rice, beans, and maize, and is donated by individual through our Foundation; none of the funds came from our own pockets. We don't need to wait for support from outside Nigerians; we may call on other well-intentioned Nigerians. It is also necessary for us to donate. When we give, we give to all sides; I'd like to encourage Muslims to contribute so that we may help all of these individuals who have been rendered homeles. Our good deeds should not be defined by our faith; I challenge both Christians and Muslims to assist. We have 29,804 Irigwes who have been rendered homeless as of Thursday evening. That's about 30,000 individuals; 55 people have been hurt, and 70 people have died.”

Rev. Ronku Aka, the Brra Nggwe Rigwe, lamented the fact that his people are being chased like rats everywhere, but vowed that there will be no retaliation because of their deep trust that God will avenge for the attack on them.