The Romance of the Skies — aka, Flight 7 — was, to some extent, the Titanic of airline travel, and had the unofficial title of "ocean liner of the skies." The aircraft was a Boeing B-377 Stratocruiser, introduced to the world in 1947. Like the ill-fated ocean liner, Flight 7 was supposed to outlast everybody on board...

Thanks to four revolutionary engines, the "ocean liner of the skies" could reach unprecedented speeds of 350 mph. Beyond that, due to the Stratocruiser's overall size, it had a carrying capacity of 147,000 pounds. The scope of the aircraft was grand in every sense of the word...maybe a little too grand.

Prior to takeoff, maintenance had been completed on all of Pan Ams' Stratocruisers in order to strengthen them even more. Despite routine inspections, however, it's possible that the aircraft's inspectors were so reassured by the strength of the engines that they weren't as thorough as they could've been.

There were 44 individuals onboard the Romance of the Skies for its November 8, 1957 flight. With no sign of bad weather, it seemed like it'd be about as eventful as any ordinary flight. It wasn't until Flight 7 was far from land, flying over the ocean, that something happened that experts still can't explain.

Halfway between San Francisco and the flight’s destination, Honolulu, air traffic control lost contact with Flight 7. When 6:00 pm, the time the captain was supposed to make his next routine positions report, came and went, Pan Am knew that something was very, very wrong.

For four days, one of the largest searches in Pacific Ocean history found no trace of Flight 7. But on November 14th, seven days after Flight 7 initially went missing, rescuers found their first clue, and it was chilling enough for The Civil Aeronautics Board to launch an official investigation. 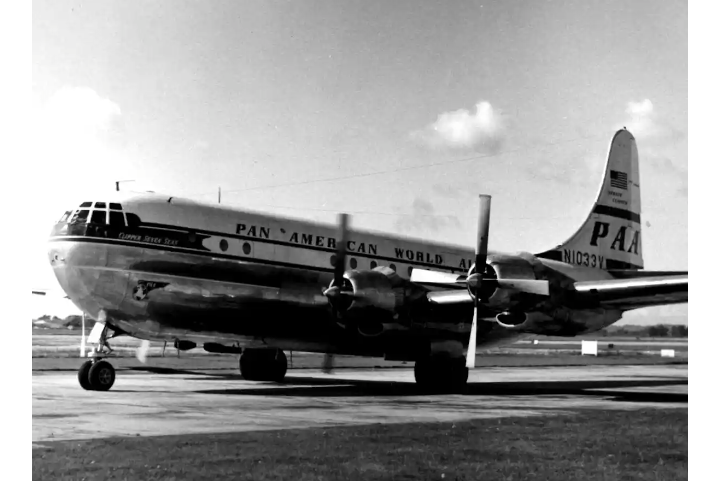 The Romance of the Skies had seemingly disappeared with no call for help, but on November 14th, rescuers came upon a grim sight: the wreckage of Flight 7 — or what was left of it, anyway. The wreckage was found 90 miles north of the flight's original trajectory. Worst of all was what they found floating alongside the wreckage.

They found 19 bodies, 14 of which had life vests on, which meant the passengers knew the plane was going down. Since the discovered passengers had died from drowning and not from injuries, the plane had probably made a somewhat successful landing on the water. And so, Pan Am and the FBI had no choice but to investigate a dark possibility.

The strange wreckage combined with the debris analysis forced the investigators to consider a sinister possibility: homicide. Autopsies revealed that four of the bodies contained high levels of carbon monoxide in their bloodstreams. Since these people were seated in the front and rear of the plane, it’s safe to assume that everyone on board had some level of contamination.

Of course, the main question was why most -- though not all -- of the recovered passengers had high carbon monoxide levels. After reviewing the passenger roster, investigators were alerted to two men aboard Flight 7 who may have been more involved in the crash than originally believed.

The first man, Eugene Crosthwaite, wasn’t revealed to the public as a suspect until years after the disaster. Known as a “psycho” back home, it’s no wonder the notoriously violent man who allegedly showed blasting powder material to a friend days before the flight was an initial suspect.

It’s even stranger how Crosthwaite changed his will just one hour before Flight 7 took off, as if he knew something awful was going to happen. Even with this seemingly-damning evidence, however, the investigators zeroed in on someone else far sooner after the crash.

The second man’s name was William Payne, and the evidence implicating him as the mastermind is similar to that of Eugene Crosthwaite. Payne allegedly arranged some last-minute insurance policies shortly before his flight, and he was thousands of dollars in debt when he boarded the plane.

Even worse, Payne had worked as a Navy frogman and had extensive knowledge of demolitions. As damning as this may sound, however, debris analysis revealed that there was no evidence of a bomb or any kind on the plane. The possibility of foul play gave investigators a lot to look for in the watery depths…

But since the investigators only had waterlogged debris to analyze, it was impossible for them to make any clear conclusions about what had happened in the sky. For years, the families of the passengers onboard Flight 7 went without answers. Two people, in particular, were affected by the disaster and decided to pick up the mystery where the investigators left off.

Ken Fortenberry, a newspaper publisher, lost his father on the plane. Gregg Herken, a history professor, lost his fourth-grade teacher who had been a flight attendant.

B-377 Boeing Romance of the Skies Strange Stratocruiser