By TurnerNews (self media writer) | 7 months ago

The Alaafin of Oyo, Oba Lamidi Adeyemi has recently visited Oyo town in Oyo state in which an Odan tree which was uprooted by the rain allegedly rises up back again. 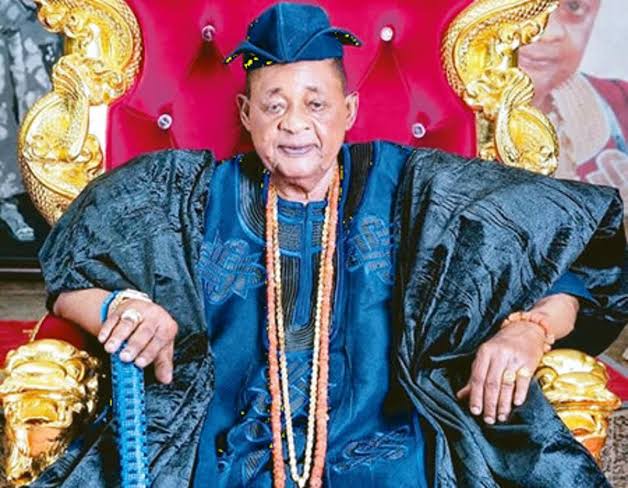 According to the videos circulating social media, the people of the the town were in awe and were greatly astonished when they noticed what had happened.

According PUNCH news correspondents, the Old Odan tree was uprooted by a downpour which had occured on Monday but was firmly rooted back on the ground within 24 hours.

In the videos which were posted online, the tree was completely uprooted on Monday by the rain and its branches were hewn down but it was strangely rooted to the ground the following day. 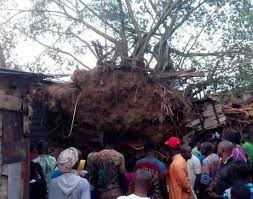 Photo: The tree fell on Monday

Photo: The Tree rose on Tuesday 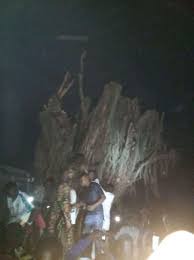 According to reports from different sources, the heavy downpour had started by 4pm. Some people had taken cover under the tree but were unfortunately killed when the tree fell on them.

The Head of Operations at the Amotekun Corps, in the Atiba area, Akeem Ojo revealed that the victims were killed at about 6pm in evening. He stated that another person was seriously injured after the tree fell down and was taken to the hospital while vehicles under it were damaged. 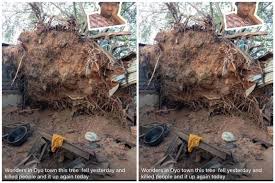 The market chairman narrated how four loggers were unable to cut the branches off the tree. He stated that it was until fifth was able to cut off the branches before the rescue and recovery operation could begin.

The bodies of a student of one of the federal government colleges in the state along with a woman and her children were recovered from under the tree.

The Aide to the Alaafin of Oyo, Bode Durojaye revealed that the Monarch had gone to console the families of the deceased and also to check on the Mysterious tree which had risen after falling down. The tree did not have its branches back on it but its roots were back in place.