By Osfem (self media writer) | 10 months ago

The driver and passengers inside a Toyota Corolla car were feared dead in the afternoon of Friday, August 20, when the driver lost control and crashed into a fully-loaded stationary trailer in Lagos State.

The incident occurred around 2:40 p.m. at Abule Pan before Eleko on the Lekki-Epe Expressway, when the driver of the car, who was said to be on top speed, suddenly lost control on the highway and crashed into the broken down trailer belonging to a foremost cement manufacturing company (names withheld by me).

It was gathered that the driver of the car, who was said to be coming from the Awoyaya end of the road and on top speed, suddenly lost control of the vehicle and in the process, crashed into the rear of the stationary trailer, causing the car to be seriously damaged.

As a result of the impact of the accident, it was gathered that both the driver and the two passengers in the vehicle lost their lives as the entire driver and passengers sides of the car were totally damaged. 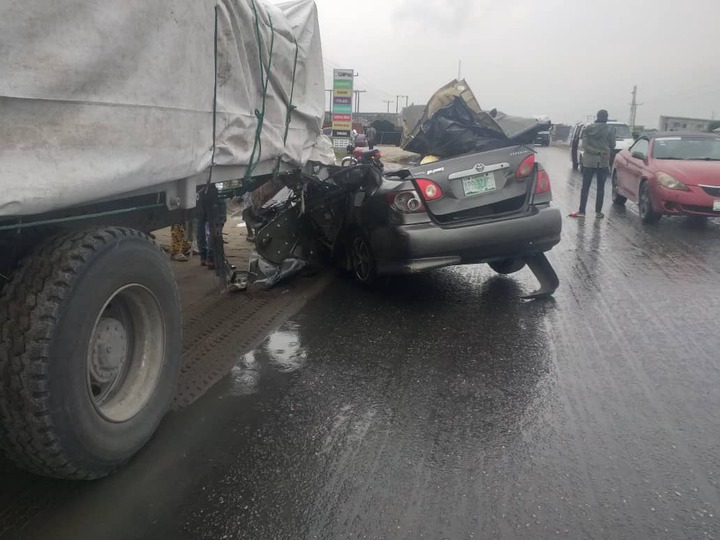 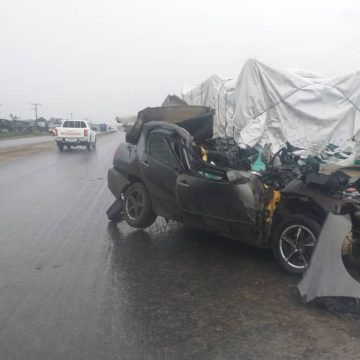 It was also gathered that the rain that fell earlier which made the road wet and slippery could have contributed to the accident as the driver could not see the road and the broken down trailer clearly.

According to reports, following the incident, distress calls were made to traffic and emergency officials who came to the scene to remove the bodies of the driver and passengers and also to control the traffic situation.

As of the time of this report, the wreckage of the car and the broken down trailer were still on the road while policemen had also arrived at the scene to ensure law and order are maintained while they are also expected to remove the vehicle from the road.

The incident was announced by both the Lagos State Traffic Management Authority (LASTMA) and Lagos State Emergency Management Agency (LASEMA) on their social media platforms which added that the casualties had been moved from the scene to the morgue.

According to LASTMA on its Facebook wall: "An accident has occurred when a speeding Toyota Car crashed into the rear of a fully-loaded trailer belonging to a cement manufacturing company (names withheld by me) at Abule Pan area before Eleko on the Lekki-Epe Expressway. The driver and two passengers in the car are casualties.

"Officials of LASEMA have taken the casualties in their ambulance to the morgue while officials of LASTMA and men of the Nigerian Police Force are on ground to manage the traffic situation on the road. Drive with care."