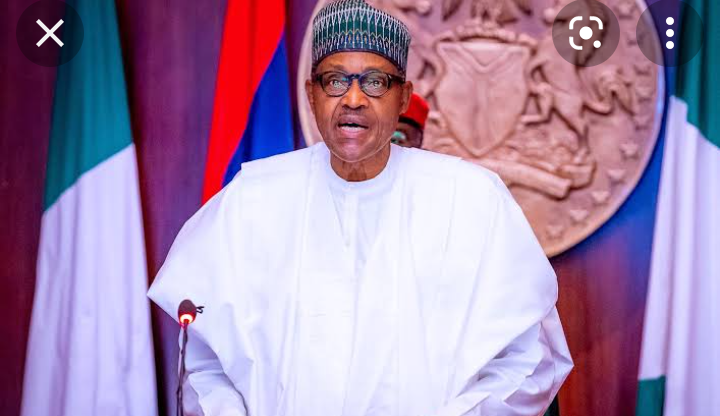 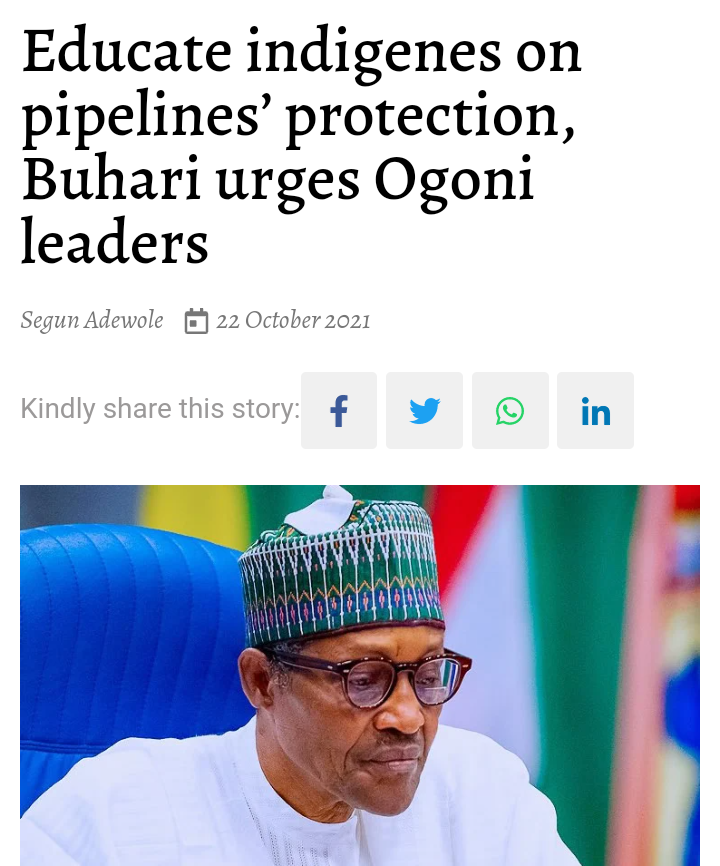 The President, Major General Muhammadu Buhari (retd.), has urged the leaders of Ogoni land to sensitise indigenes on the value of protecting national assets like pipelines and other oil installations.

Buhari, who received the Ogoni leaders at the State House in Abuja on Friday, stated that wilful damages to such assets usually create more havoc on their environment and hamper development in the area.

This is as he noted that the Federal Government was committed to the cleaning up of Ogoni land so that indigenes can regain their lives, return to farms and reactivate economic activities.

“You will need to educate the people of Ogoni land and the region more, that when pipelines are broken, the damage is more to the immediate environment and the people. The majority of farmers and fishermen struggle because the fishes now move to the deep sea,’’ the Special Adviser to the President on Media and Publicity quoted Buhari as saying.

The President said the environmental degradation of Ogoni land as a result of massive spills, which has led to agitations and strife, could be blamed on bad industry practices coupled with security challenges.

He said the government would bring to a close all pending issues on sons of Ogoni land.

“Your Royal Highnesses, distinguished representatives of the people of Ogoni land, I note the need to ensure completion of segment of the East-West Road traversing Ogoni land, and steps will be taken to ensure delivery under the Infrastructure Development Fund as earlier conceived. We intend to complete this vital artery of Nigeria.

“Furthermore, we are committed to ensuring clemency and national integration as part of this Administration’s bid to lay the foundation for genuine reconciliation and bring closure to the issues of Ogoni land.

“The unfortunate incidents of the early 1990s leading to the loss of lives of distinguished sons of Ogoni land and the collateral judicial processes are indelible in our memories.

“Despite the grievous circumstances, the Federal Government will consider the request for the grant of pardon to finally close the Ogoni saga,’’ Buhari noted.

Borno to shut down all IDP camps Dec 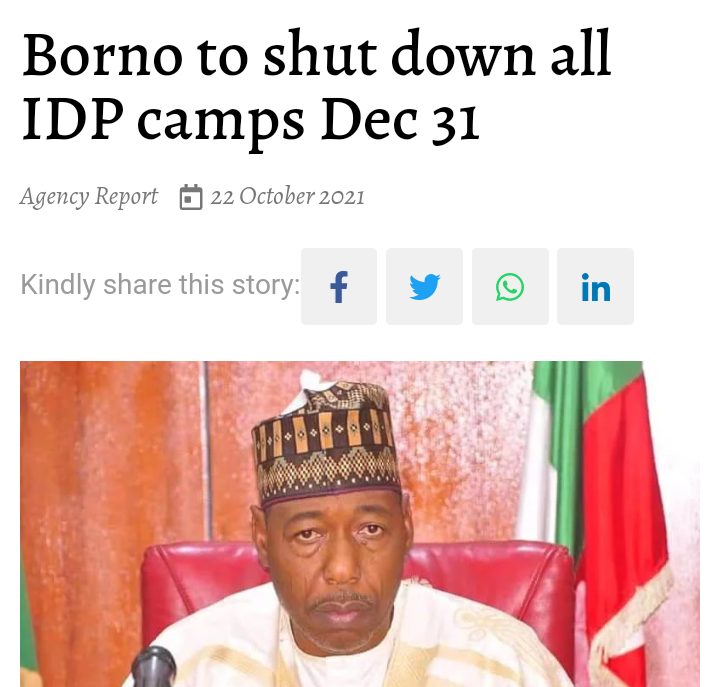 Governor Babagana Zulum made this known while addressing State House correspondents at the end of a closed-door meeting with President Muhammadu Buhari, in Abuja on Friday.

He said the decision to close the camps in Maiduguri was informed by the recent improvement in the security situation in the state.

According to him, the state government decided to close the camps to enable displaced persons to return to their ancestral homes. 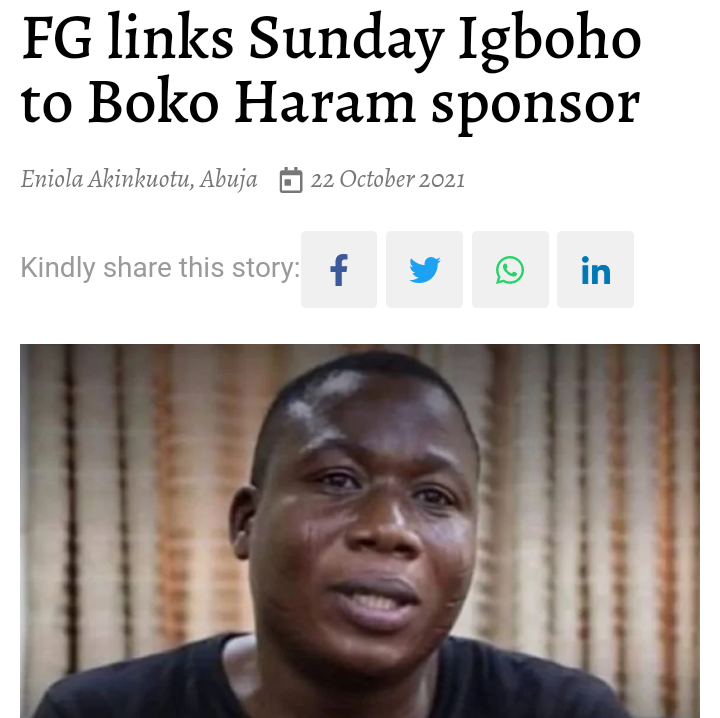 The Federal Government says it has established a link between Yoruba nation agitator, Sunday Adeyemo aka Sunday Igboho, and a Boko Haram sponsor, Surajo Muhammad, who was sentenced to life imprisonment in the United Aram Emirates on charges of financing terrorism.

The government also alleged that between 2013 and 2020, Igboho received N127m from several financiers including a federal lawmaker. The government, however, refused to reveal the identity of the lawmaker.

The Attorney-General of the Federation, Abubakar Malami (SAN), said this while reading out findings of a Presidential committee set up to investigate Igboho and leader of the Indigenous People of Biafra, Nnamdi Kanu. 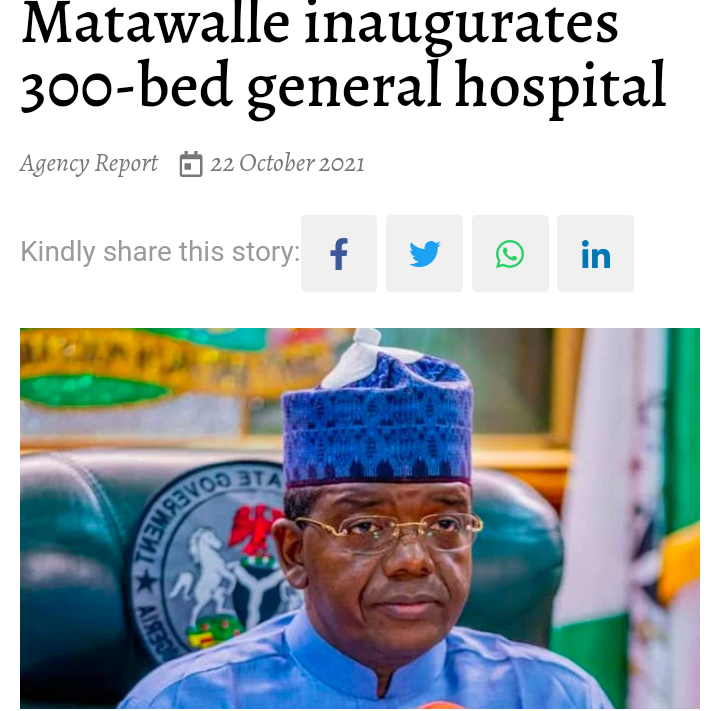 Governor of Zamfara State, Bello Matawalle has inaugurated a 300-bed General Hospital in Birnin-Magaji Local Government area of the State.

Matawalle, represented by Chairman, Hospital Services Management Board, Bashir Maru, made this known on Friday.

He said the State Government will recruit more personnel to provide adequate services in the state hospitals.

”The State government plans to upgrade and remodel both primary and secondary health facilities to improve health care in the state.

”The government is working to provide state-of-the-art facilities for effective health care delivery in all parts of the state,” he said.