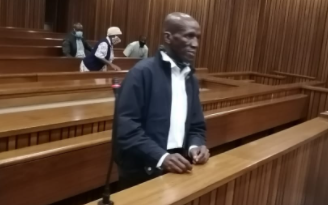 Collins Maduane a South Africa man who claims to have been hunted by the spirit of his girlfriend who he killed 20 years ago has been sentenced to life imprisonment at pretoria high court.

The then 31 year old man strangled 25 year old Florah Mahlo his girlfriend to death in his home.

Neighbors said they heard screams on the night of September 3 1999 coming from Collins home and they recognized the voice to be Florah's voice but when he was asked about her whereabout the next morning, he said she visited her relatives in Johannesburg.

Collins was detained in the year 2000 at the Bavianspoort Maximum Prison to serve 12-years for attempting murder in another case, He called his sister and confessed after he was haunted by Florah's spirit, Said Lumka Mahanjana, spokesperson of the National Prosecution  Authority.

He explained how he killed her and set her body ablaze at a nearby bush, when he discovered that the body wasn't completely burnt the following day, he buried the remains, Said Lumka.

Collins broke into a fight with his niece in 2019 which made his sister worried about his uncontrollable anger, he told them that Florah has been tormenting him and that he was the one who killed her, he also invited Florah's mum and confessed to her.

Months after Ghanaian lady posed naked in front of her son, she gets sentenced to 90 days imprisonment

How 500K Was Withdrawn From My Account After My Card Got Stuck In ATM, Man Laments (Video)

Stop Wasting Money Fixing Expensive Hair, What Is In Your Head Always Is What Makes You Greater- Reno