An 8 years old boy have been struck to death by lightning in Imiringi community of Ogba local government area, Bayelsa state.

The little boy, identified as Stephen Akanam, is a native of neighboring community to Imiringi, Kolo, and according to sources, he was living with his aunty at Imiringi where the incident happened.

Stephen Akanam was reportedly struck to lightning on Wednesday evening while playing football with his friends under rainfall.

According to Vanguard newspapers, a source who didn't want his identity to be revealed said that suck kind of tragedy have never happened in the history of the community.

According to the source, on that very day, Stephen Akanam was indoors throughout the day until in the evening when he decided to go out and play football with his friends.

Few minutes after 8 years old Stephen left the house, a woman rushed to the house to inform his family that he was dead. Upon reaching the scene of the incident, they saw Stephen lying on the floor and rushed him to the where he was confirmed dead by the doctor. 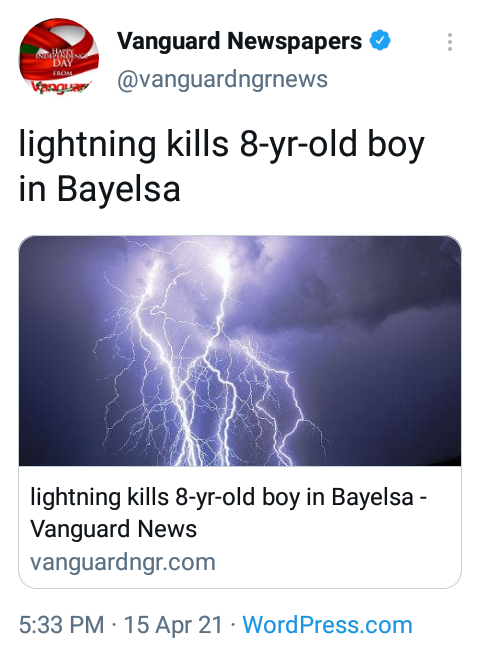 Chief Imo Shares Photos Of Him Carrying His Daughter All Night As She Sleeps, Says He Didn't Sleep