By Iscomi (self media writer) | 1 year ago

At least, eight Boko Haram terrorist were killed on Friday, while soldiers and policemen sustained injuries when the insurgents ambushed a convoy of Borno State Resettlement and Relief Committee officials along Monguno- Nganzai Road. 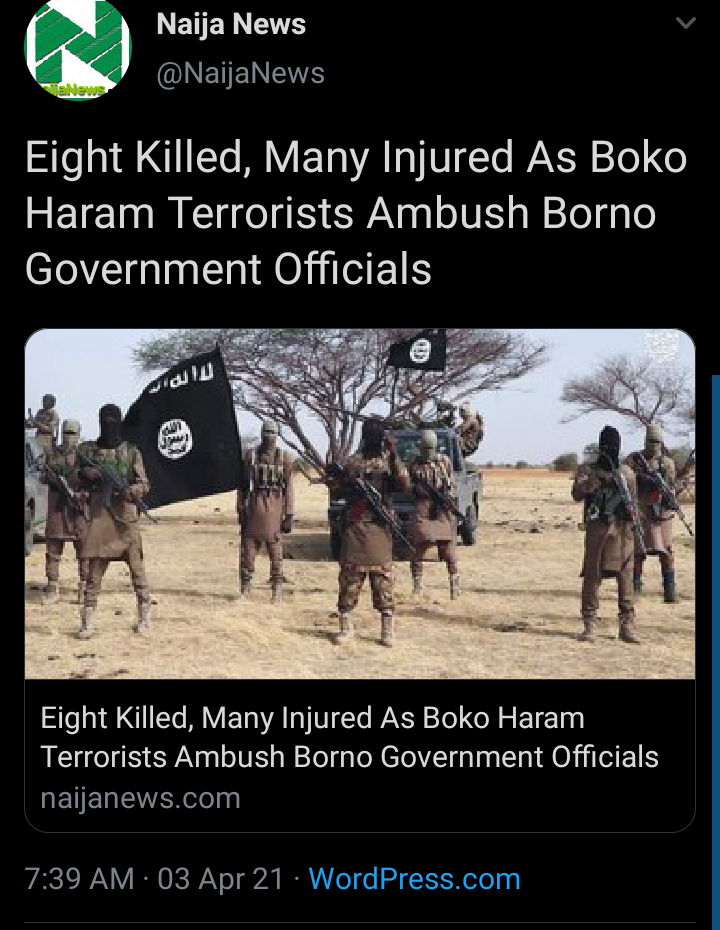 Some of the government officials in the convoy include the Attorney General in the state, Kakashehu Lawal, the Commissioner for Rehabilitation Reconstruction and Resettlement, Mustapha Gubio, and that of Local Government and Chieftaincy Affairs, Alhaji Mai-Mele.

It was gathered that the government officials were returning from Monguno, where they went to distribute relief materials to Internally Displaced Persons (IDPs) when the terrorists attacked their convoy.

A source that spoke on the incident, noted that eight terrorists were killed by soldiers with support from men of the Anti-Robbery Squad and Civilian Joint Task Force.

Hum Angle on Friday shared a video reportedly obtained from the dreaded group showing fighters carrying RPG & artillery equipment, as well as a corpse of the pilot & the aircraft’s debris.

Suspected Fulani herders have launched a fresh attack on Igangan in the Ibarapa North Local Government Area of the state. 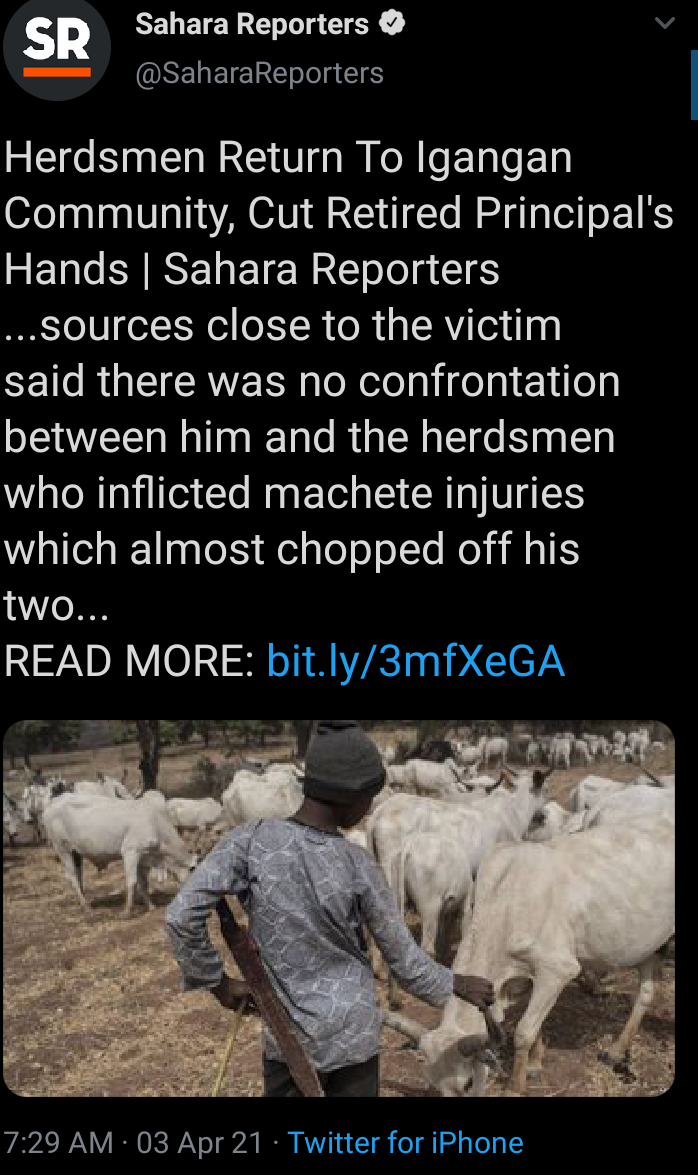 It was gathered that some herdsmen on Friday afternoon attacked a retired school principal, Ojedokun Ogunmodede.

The reason why his assailant attacked him was not clear but sources close to the victim told Punch that there was no confrontation between him and the herdsmen who inflicted machete injuries which almost chopped off his two hands.

The Secretary of Ibarapa Farmers Union, Mr Taiwo Adeagbo, who is popularly known as Akowe Agbe, told our correspondent on the telephone that the retired principal is his relative.

Adeagbo, fighting for farmers' rights in Ibarapa, said herders had not stopped destroying farms and attacking farmers in the area despite the public outcry against their criminal activities.

He said, "The victim is my relative. He is a retired principal, and he should be around 62 years old. I was called to see what happened to him. I immediately called the Commissioner of Police (Ngozi Onadeko). She said I should report to the police officially and I called the DPO in Ayete. He came with two officers and two vans loaded with armed police officers.

Danladi Umar, the notoriously vain and sickeningly skin-bleached chairman of the Code of Conduct Tribunal, was caught on camera on March 29 physically assaulting a security guard identified as 22-year-old Clement Sargwak. 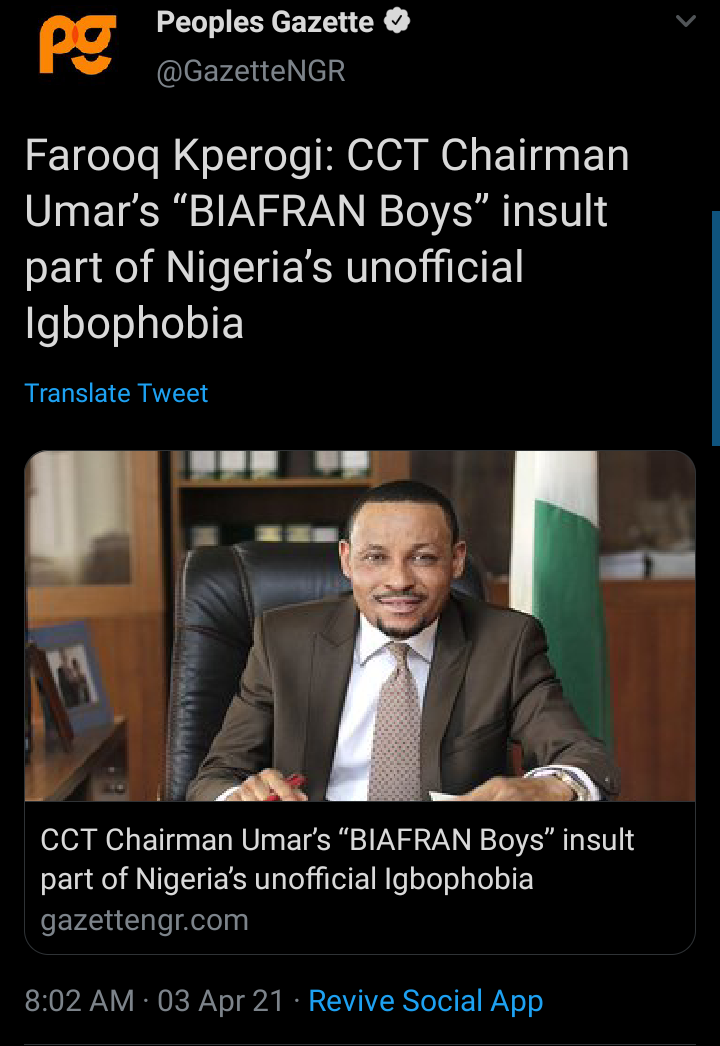 Umar flew into a tempestuous rage because Sargwak besought him to not park his car at a spot that obstructed traffic in Abuja’s Banex Plaza in Wuse 2.

In the aftermath of the swift, across-the-board social media denunciations that his cowardly physical violence against a lowly security guard roused, Umar caused the head of the Press and Public Relations unit of the Code of Conduct Tribunal by the name of Ibraheem Al-Hassan to issue an agonisingly dreadful and error-ridden press release that, among other things, singled out nameless “BIAFRAN Boys” for blame in a show of shame in which he is the main villain.

A member of the House of Representatives, representing the Jos North/Bassa Federal Constituency, Hon Haruna Maitala is dead.

The lawmaker reportedly died in a road accident along Bade-Gitata road Friday night on his way to Jos. 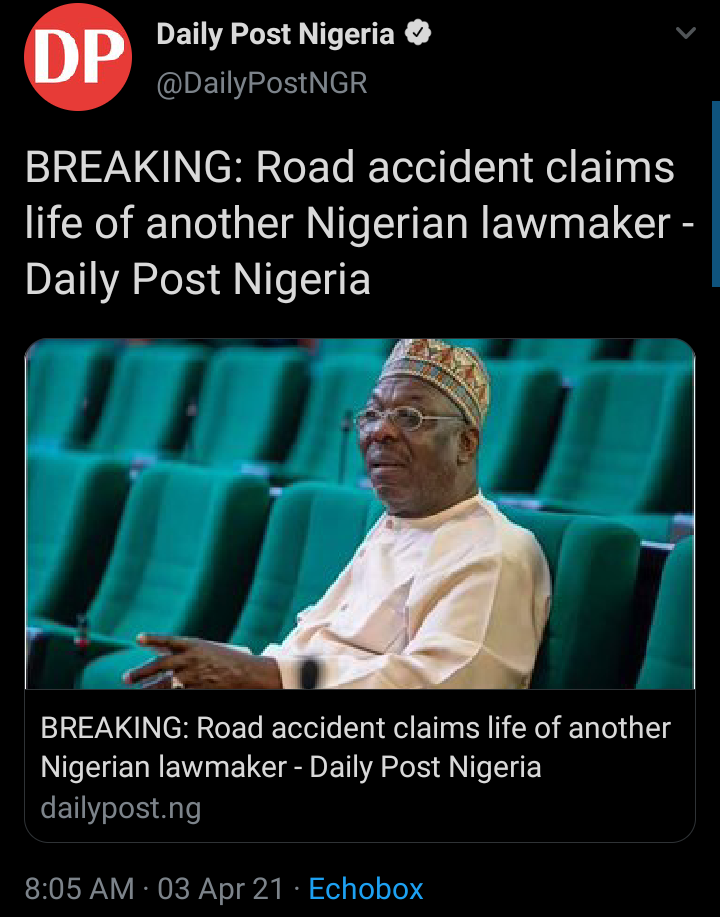 This is coming barely a month after another lawmaker, Yuguda Killa from Jigawa State, passed on.

Policemen from Ozoro Divisional Headquarters have arrested four suspected kidnappers for the alleged abduction of one William Aduwoma. 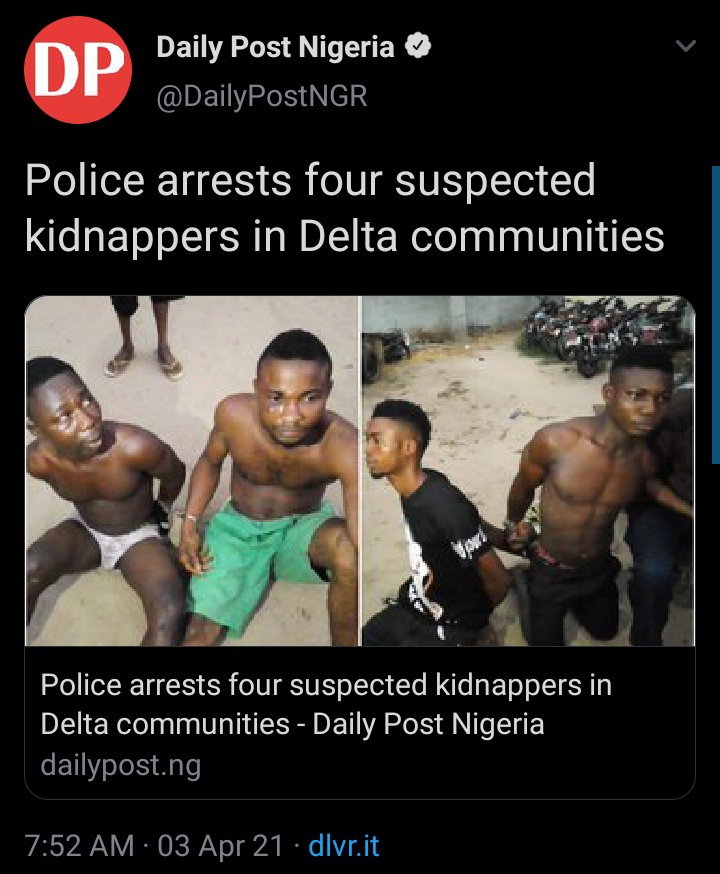 The suspects were arrested in Aradhe and Iyeriri quarters in Ozoro community, DAILY POST reports.

The suspects which include, Nwachukwu(24 years), Oletu Augustine(35 years), Obi Francis (25 years) all of Aradhe community and Udumubra Okema (35yrs) of Owhelogbo Road ozoro were arrested in their hideouts in the two communities.

Their arrest followed an order by the Commissioner of Police, CP Ari Muhammed Ali to the DPO, CSP Ogedengbe Areguamen. 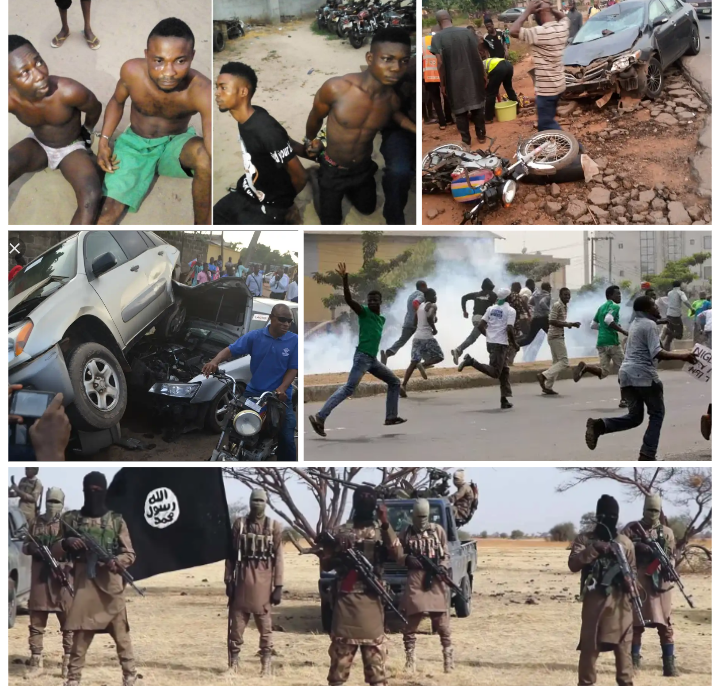