By Evaristus23 (self media writer) | 1 year ago 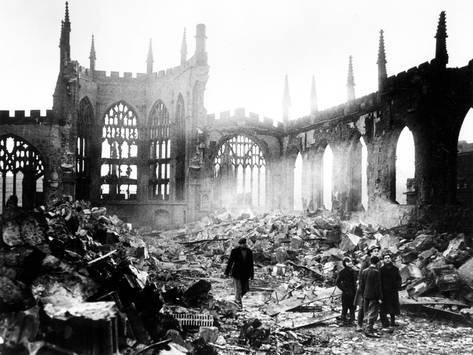 1.Coventry was the most heavily targeted city in Second World War history during the air raid on the night of 14 November 1940.

2.As a result of the raid, Nazi propagandists coined a new phrase - coventrieren - which meant to raze a city down.

3.Over 500 Luftwaffe aircraft including around 100 Luftwaffe bombers taken from airfields spread across occupied Europe carried out the raid code-named Moonlight Sonata.

4.The purpose was to knock Coventry off the map as a major war production centre. Hitler was also said to have ordered the raid as revenge on an RAF attack on Munich.

5.It was a brilliant moonlit night on 14 November, so bright that the traffic was able to move around in the dark.

6.Over 50 landmines and 500 tons of high explosive were dropped by the Luftwaffe. A new weapon was also tested, the exploding incendiary.

7.Coventry lost not only the great mediaeval cathedral of St Michael's, the only English cathedral to be destroyed in World War II, but also its central library, market hall, hundreds of shops, a public building, and the palace yard, where James II once held his court.

8.As the 6,000-foot German bombers hovered above the burning city, the smell and heat reached their cockpits.

10.One of the largest fires in the British Empire occurred at the massive Daimler works. 15 acres of factory buildings turned into a raging inferno after 150 high explosive bombs and 3,000 incendiaries were used.

11.Coventry experienced a heatwave from the next morning until midday due to the effects of the firestorms.

12.While standing in the ruins of the burned out Cathedral, King George VI reportedly wept as he surveyed the destruction.

13.People from the city were traumatized. Little children were seen trying to squeeze through solid brick walls in an effort to escape the terrifying noise and hundreds were seen wandering the streets in a daze.

14.But despite the horror, there were also lighter moments. One of the city's three Peeping Tom statues was blown out of the niche and lay in the street, where shocked onlookers mistook it for another corpse during the blackout.