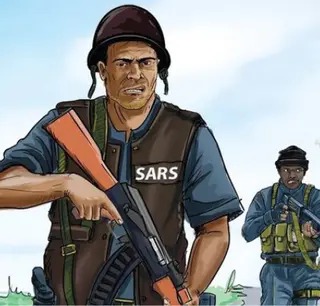 According to a sad news that was posted by Daily Trust Newspaper this morning, it has been alleged that the mother of a 20 year old boy, who was killed by the recently disbanded Special Anti Robbery Squad of the Nigeria Police Force, has narrated how she became blind after sars operatives arrested his son illegally in 2006 and killed him..

According to what the woman, whose name was given as Mrs Arekemase said, she made it known that in 2006, SARS operatives detained her son, whose name was given as Kabiru Arekemase for four months in their station, after illegally arresting him and labelling him an armed robber and thereafter, he was charged and acquitted of the charges made against him at the Chief Magistrate Court sitting in Iyaganku area of Ibadan, in Oyo State on August 2006.

However, four months after he was acquitted of the false charges, sars operatives came to their house again to arrest the innocent boy, as they threatened him that they will waste him if he do not pay them the amount they demanded from him as bribe, as his son kept telling them that he was not an armed robber, and also severally, they do tell her whenever she goes to their station to give her son food that, her son will become history if they do not pay the money they demanded.

She said, sars operatives eventually killed her son and she wept for several years due to this, as her persistent crying was what made her go blind till date, as she also alleged that she demanded for the corpse of her late son for proper burial but, they didn't give it to her.

She however said she wants N250m compensation from the panel, in order to serve as compensation for the illegal arrest and the extra judicial killing of her son.