"He promised to give me N5m but, he gave me N50,000" Herbalist who helped man to kill's fiancee says

By MosesNews21 (self media writer) | 7 months ago

According to a news that was posted by Punch Newspaper this morning, it has been alleged that the native doctor, Rafiu Afolabi, who was arrested for the murder of late NSCDC officer has narrated how her fiance, Christopher Akpan conspired with him to kill the deceased for money ritual.

Rafiu Afolabi, who is 67 years of age from Saki area of Oyo State, said that the deceased is always making charm from him and that at a particular time, she approached him to help her do charm that will make her business boom, as she was selling mortal and pestle aside the NSCDC work she was doing.

He said after he made the charm for her, the deceased approached him again that, he should help her do concoction that will make her conceive on time as soon as she gets married to the second suspect and they both agreed that he should bring the concoction to her house when he is done making it.

On the day he took the concoction to the deceased house, he met her husband to be there and they talked and exchanged contact, and it was after then that the man visited his shrine and told him that he wants to use his wife for money ritual, of which he will lure her to his shrine and kill her there.

However, days after around 10pm in the night, Akpan came with Josephine to the forest where she was murdererd, after he told her that they needed to perform prayers for her, as the herbalist claims that when they came, Akpan spread a cloth on the ground, told the deceased to kneel down and immediately, he shot her with a gun that was with him. After shooting her, he quickly grabbed a calabash and poured some of the blood gushing out from her head into the calabash, as he (herbalist) ran home to get a hoe and they dug a shallow grave and buried her inside.

The herbalist further claimed that he promised to give him N5m after 8 days but, he came to him the following night and offered him N50,000 as he told him to be patient with him for the remaining balance and after the, relocated to saki in Oyo State, where he was arrested. 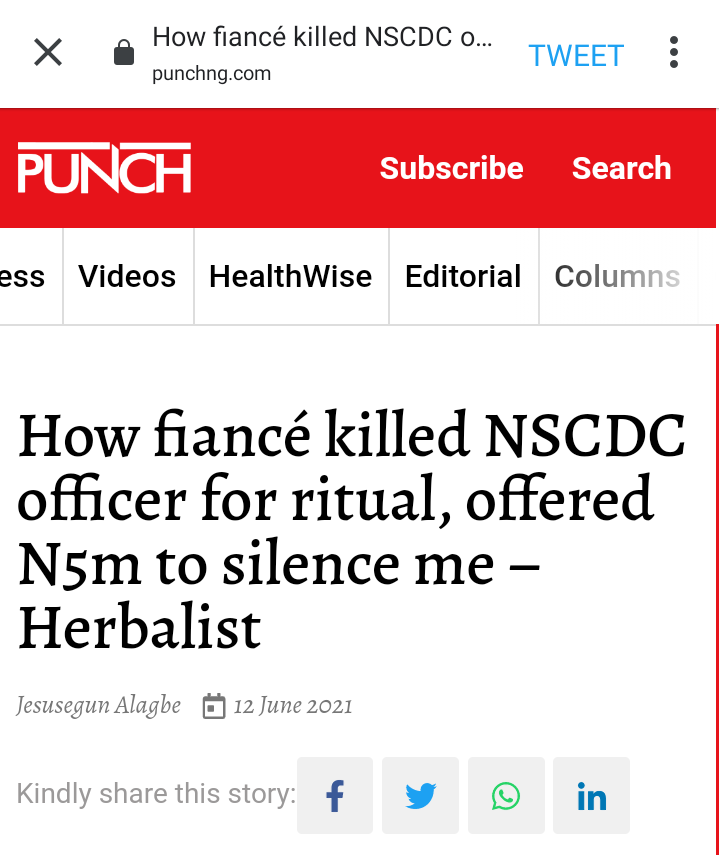