By Ayoblog (self meida writer) | 17 days

Two police officers have been killed by unknown gunmen in a deadly attack at a police station in Ikono local government area, Akwa Ibom state.

A female police officer on night duty at the Ibiaku Ntok Okpo Police Station is in critical condition following the invasion which occurred around 3 am on May 1.

Five operational vehicles were also set ablaze, with a flag hoisted at the police station stolen and destructive acts carried out by the invaders.

The Chairman of Ikono LGA Hon. Nyakno Okoibu was at the scene of the mayhem in a bid to ensure that normalcy is restored to the area of attack and other parts of the Local Government Area.

His spokesman Nsisong Ubong Ntuk, said in a statement that the Chairman “wants to inform the people of Ikono Local Government Area and the State at large to stay calm as he is assiduously working with relevant security agencies to ensure that the situation is contained and necessary measures are being put in place to forestall a reoccurrence”.

He added that anyone with useful information on the attack should come forward as there is the “assurance of strict confidentiality”. 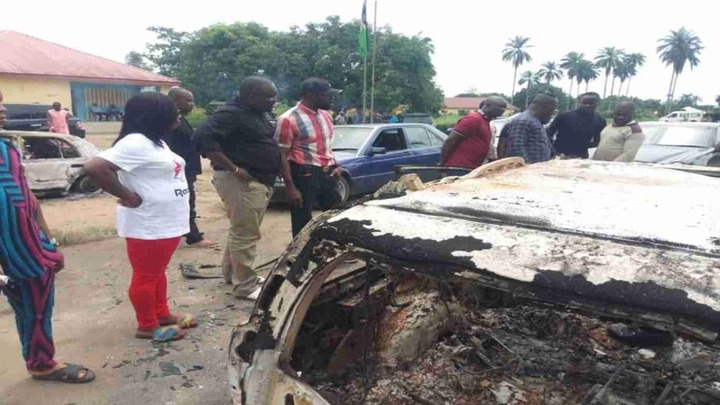 The latest attack comes after a female police officer was shot dead on Tuesday, April 27 by some gunmen in Ika local government area.

They died after some armed men on motorcycles attempted to attack the Ika Divisional Police Headquarters and set it ablaze.

But the gunmen, armed with AK-47 and other dangerous weapons, met stiff resistance as the Divisional Police Officer and other officers on the ground fought and repelled the attackers.

State Police Spokesperson Odiko MacDon, who confirmed the killing, said “before heading towards the Station to attack it, they ambushed and killed a Woman Police Corporal, Esther Akpan who had just closed from duty and was on her way home in company of a Police Special Constabulary, Isonuyo Effiong Paul”.

Content created and supplied by: Ayoblog (via Opera News )