The Burning Of Suspected POS Robbers In Imo Is Barbaric, Jungle Justice Has Done More Harm Than Good

According to a report from Daily Post, an enraged mob lynched three accused POS robbers in front of Afor-Ukwu market in Isiekenesi, Ideato South Local Government Area, Imo State. The incident occurred when the thieves allegedly robbed a POS operator and fled with the POS machine. 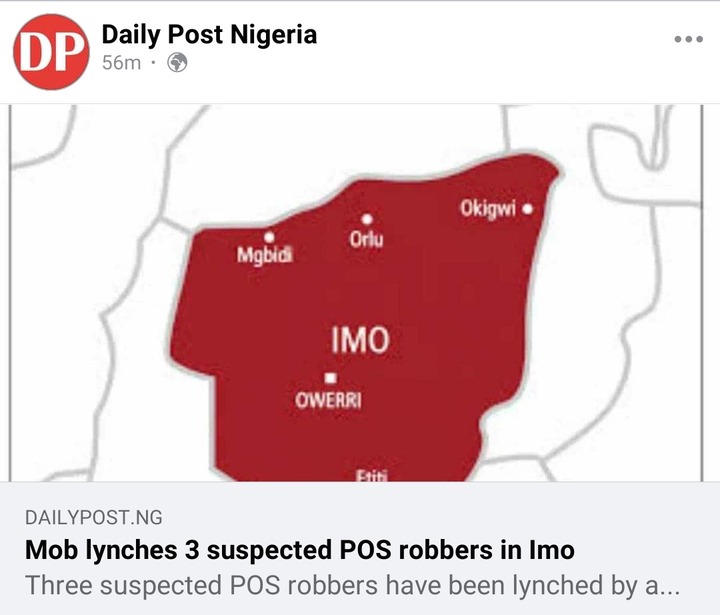 The victims of the heist immediately raised the alarm, drawing the attention of residents and some mobs who murdered the three suspects. The suspects attempted to flee after some youths chased them from the scene of the incident in Isiekenesi and apprehended them in Mgbee.

After beating them black and blue, the enraged mob led them back to Afford-Ukwu market. They used three used tyres, sprayed them with gasoline, placed them on the suspects in the middle of the road, and lit them on fire.

Jungle justice is far from impartial. It is a sort of mob rule in which people take the law into their own hands and punish suspected offenders for horrible crimes they believe they have committed. Jungle justice, often known as mob or street justice, can result in extra-judicial killing.

Victims are denied rights to which all citizens are entitled under the rule of law. Punishment is typically harsh, involving the stoning or burning of the unlucky person in public. Many innocent Africans have died as a result of jungle justice. Jungle justice is a law for the jungle and Nigeria isn't a jungle. Jungle justice is frequently carried out quickly, sometimes with local police standing by and doing nothing. It has not reduced crime in Africa; rather, it has increased the number of human rights violations on the continent. African institutions must overcome the negative views that surround them and demonstrate that they exist to answer the concerns of all residents.

Most Africans long for a just and fair society in which everyone is presumed innocent until proven guilty. Governments must take action to put an end to the jungle justice that has already claimed the lives of so many innocent Nigerians.