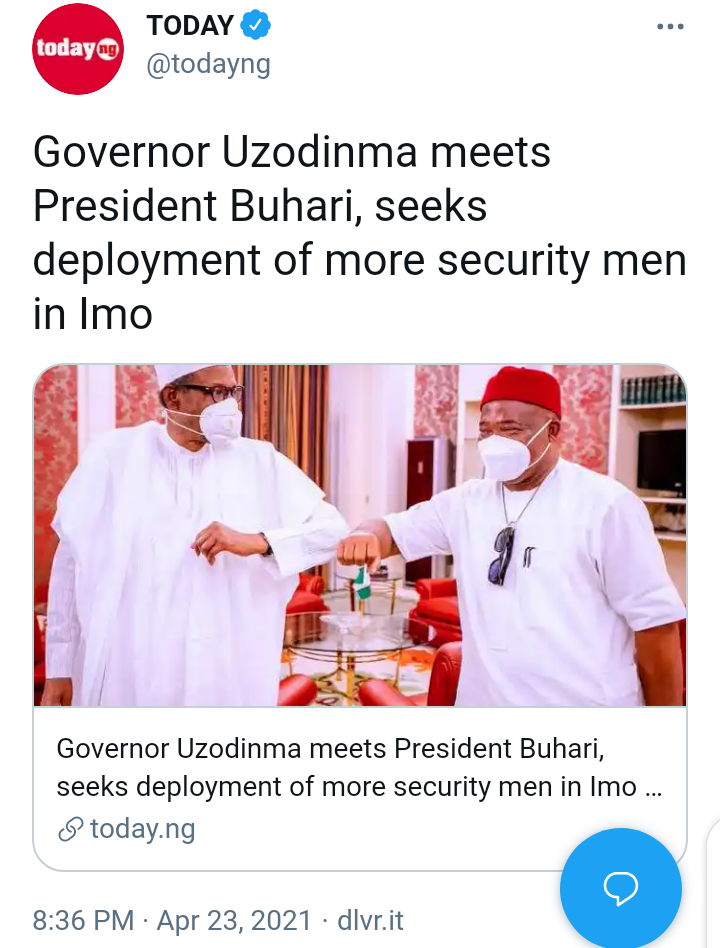 Governor Hope Uzodinma of Imo State has appealed to the federal government to increase the security presence as well as give the security agencies necessary logistics support towards addressing the security challenges facing the state.

Uzodinma made this known Friday while fielding questions from newsmen after a meeting on Friday with President Muhammadu Buhari at Aso Rock Villa in Abuja.

The governor said the appeal was coming on the heels of various attacks on police stations in the state, noting that every support he asked for has been approved and granted by the president.

When asked if he subscribes to the claim that the attackers were not from Imo State, Uzodinma said some of those arrested by security agencies are not from Imo State or the South-east, but a combination of those within the state and those from outside the state. On how many people that have so far been arrested, he said almost 40 to 50 people who have made useful statements and confessed to the crime.

The governor stressed that the issue of banditry is something everyone must rise up to condemn and then support security agencies to be able to provide an enabling environment for people to go about their businesses, without fear of any molestation. Opposition People’s Democratic Party says with the presidency’s backing of embattled communications minister Isa Pantami who has faced calls for his removal from office over his links with terrorist organisations al-Queda and the Taliban, it is now clear that the Buhari administration has become unpretentious about its support for terrorists and their affiliates.

The Peoples Democratic Party (PDP) says the statement by the Buhari Presidency, in which it shows a desperation to provide official cover to a terrorism apologist further confirms public and international apprehensions that the Buhari administration and the All Progressives Congress (APC) are patronising acts of terrorism in our country.

Nigerians were traumatized that the Presidency could mount a hopeless defence and justification for the actions of the exposed Minister of Communication and Digital Economy, Isa Pantami, who had already confessed to supporting terrorist groups like al-Qaida and Taliban.

It is instructive to note that this anti-people stance has heightened public anxiety that the Buhari Presidency is a haven for traitors who are providing support to acts of terrorist activities in our nation.

Our party holds that this has further exposed why the Buhari Presidency has failed to decisively confront terrorism as well as why terrorists, bandits, kidnappers and insurgents are emboldened to ravage our nation and massacre our compatriots.

It is inexcusable that the Buhari Presidency is showing grave insensitivity to the fact that thousands of Nigerians have been massacred, maimed and horrified. That hundreds of communities have been devastated and that our nation has been under siege because of the actions and public comments by individuals like Isa Pantami. 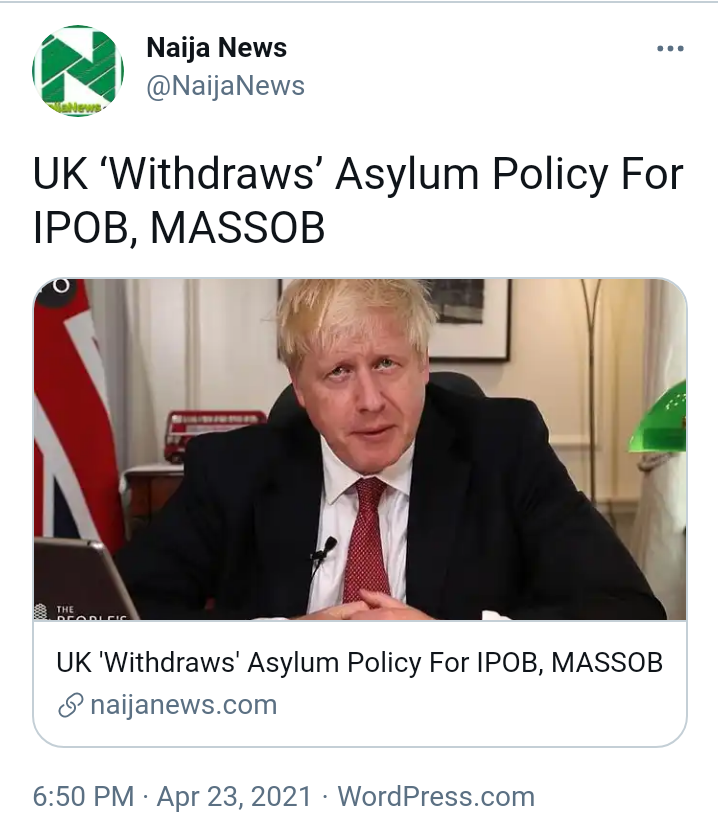 The British Government has reportedly withdrawn its asylum policy to the Indigenous People of Biafra (IPOB), Movement for the Actualization of Biafra (MASSOB), and other groups.

The British High Commission had on Wednesday said that all asylum and human rights claims from Nigerian nationals will be considered on their individual merits in accordance with its international obligations.

The commission added that it has a proud history of providing protection to those who need it, in accordance with its international obligations under the Refugee Convention and European Convention on Human Rights.

But in a swift reaction, Nigeria's Minister for Information, Lai Mohammed, said if indeed the UK government has such plans for IPOB and MASSOB members, it is totally wrong.

The minister described the decision as disrespectful, inexplicable, and a move that would sabotage Nigeria's fight against terrorism and undermine its security.

In a counter-reaction, the British High Commission maintained that the UK had a proud history of providing protection to those who needed it.

Also, IPOB has rejected the reported plans by the UK government to offer 'persecuted' members asylum.

In a statement by its media and publicity secretary, Emma Powerful, IPOB said what the group needs is not asylum but a referendum that will lead to freedom from Nigeria.

The group however commended the reported move by the UK government but said it is better to get a referendum and become independent than to abandon their agitation and flee to the UK. 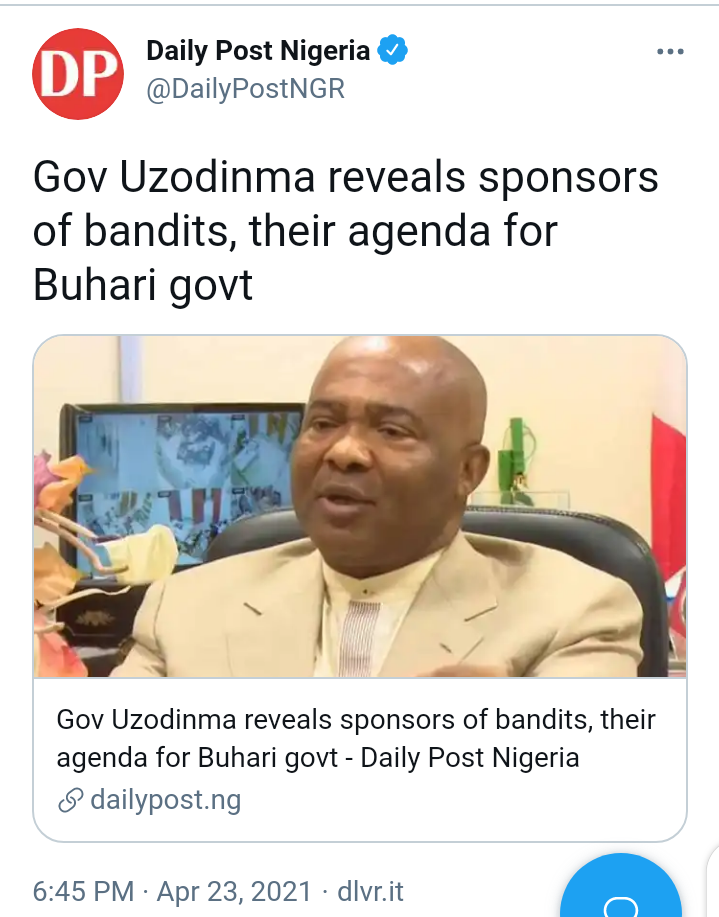 Governor Hope Uzodinma of Imo State, on Friday, alleged that politicians are sponsoring the activities of bandits.

The governor spoke while addressing journalists after a closed-door meeting with Buhari at the State House in Abuja.

He also urged security operatives to publish the names of those sponsoring bandits in the country.

The Northern part of the country recently experienced an upward surge in the activity of banditry.

On Friday, the Kaduna State government disclosed that three out of the students abducted from a private university in the state by bandits were discovered dead. 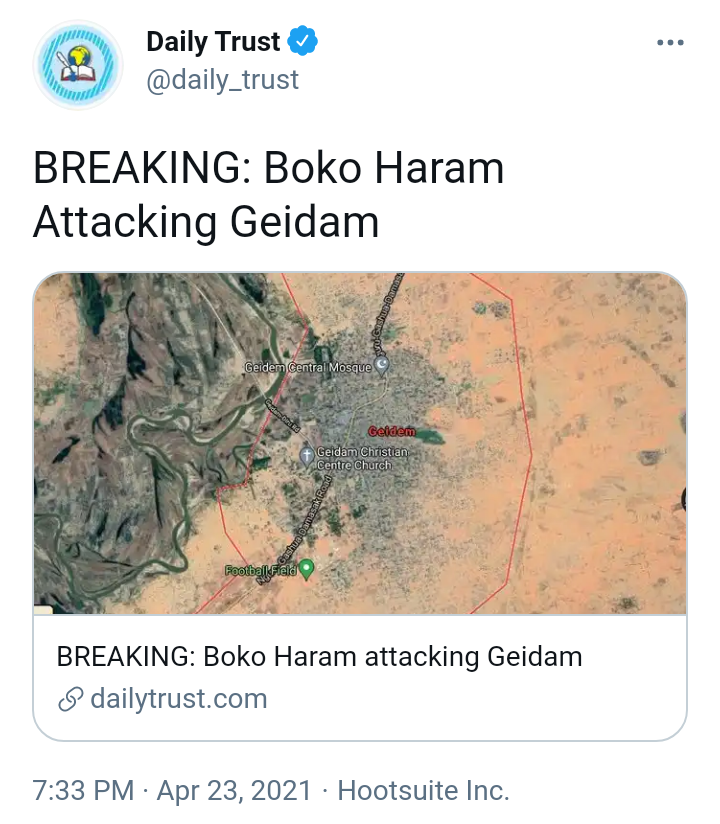 Gunmen suspected to be Boko Haram members have attacked the town of Geidam in Yobe.

It was gathered that the insurgents in eight vehicles and carrying weapons invaded the town around 6pm.

A resident of the town who spoke to our correspondent over the phone said their motorcade moved straight to the location of Kafela primary school as they started sporadic shooting.

The Police spokesman Dungus Abdulkarim has confirmed the attack adding that an air force fighter is already in Geidam providing reinforcement.

However details of casualties are still sketchy. 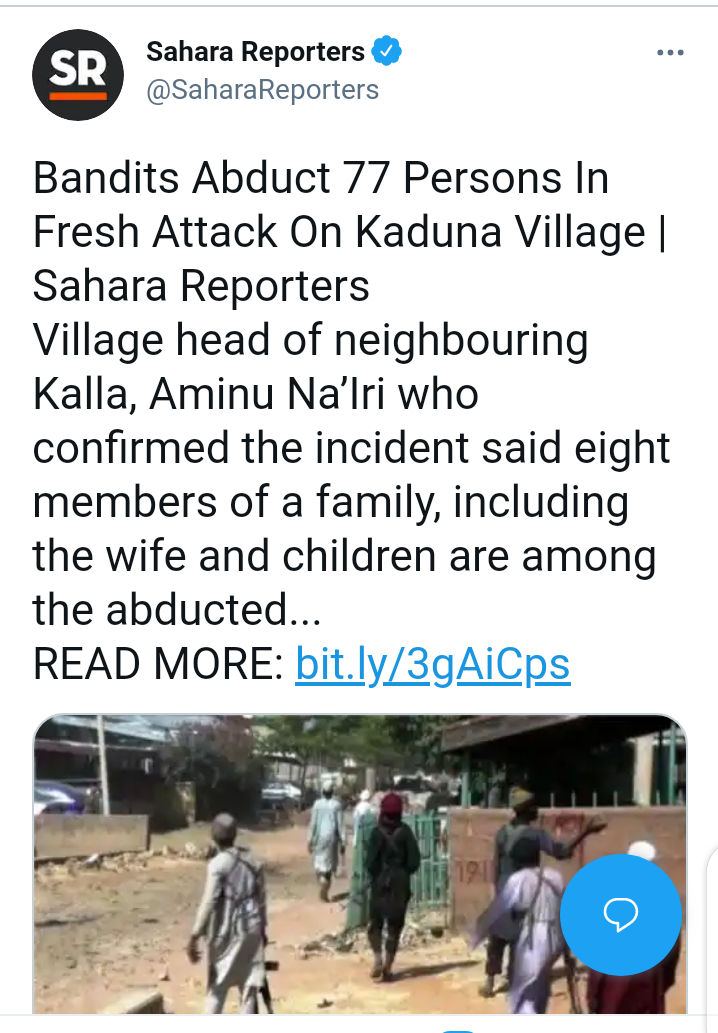 Gunmen suspected to be bandits have abducted 77 persons at Libere village in the Kajuru Local Government Area of Kaduna state.

According to AIT, village head of neighbouring Kalla, Aminu Na’Iri who confirmed the incident said eight members of a family, including the wife and children are among the abducted persons.

Libere village is located around a thick forest across River Kaduna from Kasuwan Magani Kalla village which makes it hard for security operatives to respond quickly to any attack in the area.

The incident is coming on the heels of bandits’ attack on Greenfield University along the Kaduna – Abuja highway in Chikun Local Government Area of the state, killing a staff member of the institution while several students were abducted.

Three of the abducted students were found dead on Friday. 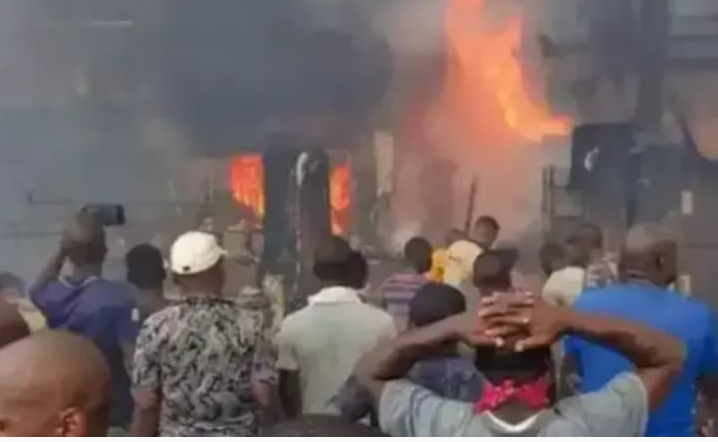 BBN Praise shares a chat between him and an imposter

Mixed Reaction As Kiddwaya Calls Himself "The King" Of Fellow Housemates, Erica And Tolanibaj

Nigerian Idol Contestant, Kingdom Issues a Disclaimer to his fans over fake accounts

As Mbaka Shuts Down Adoration Ministry For 30 Days, Check Out The Directive He Gave His Followers