"I don't look for money when I'm in your room, I smell money” - Suspected armed robber confesses

By Offblackmedia (self media writer) | 7 months ago 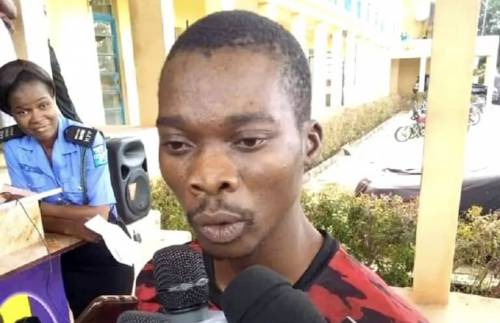 Gbenga Kikiowo, a 28-year-old suspected armed robber, says that he chose to be an armed robber at the age of seven to command international respect like some infamous notorious robbers in Nigeria.

As a result of his arrest and parade by men of the Ondo State Police Command in Akure, the state capital, Kikiowo confessed.

He claimed that he and his gang member, Tope Aladeloye, 25, were caught by policemen while on their way to get bullets for an operation in Oke-Aro, within the state.

He said his goal was to be as famous as earlier armed robbers in the country, like Ishola Oyenusi, Mufu Olosha Oko, Lawrence Anini and Shina Rambo.

At an early age, the suspect began committing robberies near his hometown of Igbara-Oke, headquarters of the Ifedore Local Government Area and revealed he had been jailed three times, blaming spiritual attacks for his behaviour.

When I'm undergoing operations, I normally bring my partner with me. He was informed that I had a gun with me, but there was no bullet in it. So he instructed me to bring the gun from Ife to Akure, which I did. We were arrested by the Scorpion Squad of the police while in the process of buying the bullet.

"Honestly, I have no insight as to why I became a criminal since I was born into a very wealthy family. Suddenly, I started stealing from my parents. Tradition is what they believe, so when they rely on spiritual solutions for me to stop my criminal act, I steal more.

“I even went to Ghana to rob. In 2015, I brought my squad to Nigeria, were captured during an operation and imprisoned in Olokuta prison.

Kikiowo Ayodele is the name of my father. It is believed that he is one of the most popular men in the Igbara-Oke axis and has married six wives with 24 children. An established farmer and former soldier, he is famous in his community. His ability is rich, but he does not believe in education and believes in the rugged life and farming.

“I had already decided to stop local crime in favour of bigger ones such as international crime, so this gun was my last hope. My aim was to find a gun, therefore I took the risk. I wanted to be an armed robber like Mufu Olosha Oko or Oyenusi, in order to make my name a household name. "I believed that crime was the means to reign," he said.

If not for the gun, Kikiowo boasted, there was no way the police would have arrested him, demonstrating that he primarily relied on intelligence for his actions.

In addition, he stated that he did not need to search for money in order to steal from his victims and that he always knew where the money was.

Intelligence allows you to operate and accomplish anything you wish. It's important I tell you, I don't look for money when I'm in your room. I smell money,” he said.

A report received from reliable sources about the move of an armed robbery gang to the Akure metropolis on May 24, 2021, has been confirmed by the state Commissioner of Police, Bolaji Salami.

On receiving the information, the police boss said detectives sprang into action, and Kikiowo and Aladeloye were arrested at Oke-Aro, Akure.

"The suspects admitted they had been involved in other robbing operations around Ondo State as well," the statement reads. "We recovered a pump-action shotgun," he said.

Salami said Kikiowo and the other suspects on parade would be brought to trial in due course. what's can you say about this? drop comments below and don't forget to like, share and follow for more updates.