By WakaAboutAfrica (self meida writer) | 18 days

… ‘Known as the Weeping Governor' 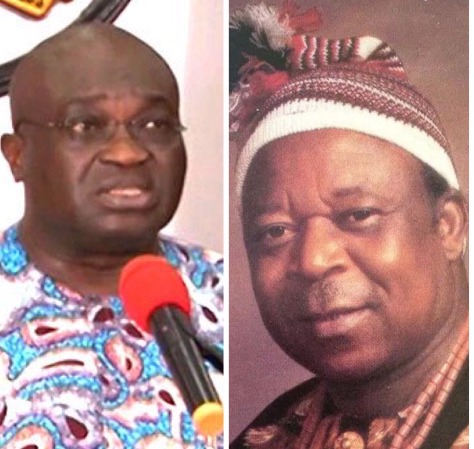 He was known as an Igbo politician and first democratic governor of Imo State, southern Nigeria from 1 October 1979 until 31 December 1983.

This development followed a request made by a student of DANIJOY International Schools, Umuahia, during Governor Ikpeazu’s lecture on ‘Building a New Nigeria through Democratic Leadership’ where he said that Late Dr. Sam Mbakwe was one of the greatest leaders in the history of Old Imo State.

The Sam Mbakwe International Cargo Airport, located in Owerri, the state capital, was renamed after him. The airport is named in honor of the former governor and politician-philanthropist, late Chief Sam Mbakwe of Imo State. It is the first state-government-built airport. The funding of the airport was by contributions and levies paid by Imo indigenes.

Governor Ikpeazu, called for a change in public perception where heroes will be promoted and rewarded and villains condemned described perception building as key to building a new Nigeria.

Governor Ikpeazu equally described early childhood education as the key to the development of the child and called for the inculcation of the same into the educational system of the country.

The governor said that our society must also promote the virtues of honesty, integrity and service, adding that the journey for a new Nigeria was a collective one as everyone is guilty of contributing to the many challenges bedeviling her.

The State Chief Executive also made a case for the inculcation of democratic principles and norms in citizens from the contact with education as this will help in the re-orientating the mindset of the younger generation towards building a society of our dreams.

Earlier in an address, the Head of Schools, DANIJOY International Schools, Ambassador Anthony Ororho, said that DANIJOY International Schools is an institution where parents of Igbo extraction living in the Diaspora, in particular, can bring up their wards in the enviable Igbo tradition with sound moral upbringing and lauded Governor Okezie Ikpeazu for his commitment to bequeathing qualitative education to the state. 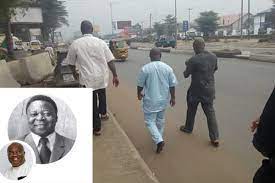 In a speech, the Senior Prefect of the School, Jenifer Ogbunamiri lauded the humility and generosity exhibited by the Governor during their recent visit to his country home on an excursion and promised that the school will always make Abia State proud in learning and in character.

Other cities served by the airport are, the commercial city of Onitsha, the automobile and manufacturing city of Nnewi in Anambra State, the industrial hub of Aba, Umuahia and Arochukwu in Abia State. Others are Okigwe, Oguta, and Orlu business districts in Imo State. The airport also serves some parts of Akwa Ibom and the Cross River States in the South-South part of Nigeria.

“He famously said "I saw money and looked away, it is not everything; we can all do the same and teach it to our children." It was later taken over by the federal government”.

Dr. Samuel Onunaka Mbakwe You May Not Know…

De Sam Mbakwe was the first Executive Governor of the Old Imo State who was respected and admired for his great pace and achievement for his people within the time he served.

His opponents admitted Chief Mbakwe's great success and achievement as a Governor and Politician. He had a very wonderful sense of humour and could even diplomatically win the sympathy of his opponents.

He was a man of great emotion and compassion who would easily burst into tears openly when he saw his people suffer.

Thus he was nicknamed 'the Weeping Governor' because of his soft heart and emotion. He knew how to turn such 'taunting from critics' into a weapon of achieving his goal.

He was a great and wise man who would remain indelible in the annals of the history of the Igbo Nation. He was a true patriot. Fie led the crusade against the injustice done to Ndigbo in Port Harcourt, concerning the abandoned property and put up a gallant fight for the creation of Imo State, and pursued the case of exercising Obigbo to the present Rivers State.

Elected First Executive Governor Imo State 1979 under the Nigerian Peoples Party(NPP) Re-elected for the second term in 1983 but this was short-lived when the army struck again.

Was elected Senator of the Federal Republic representing Okigwe Senatorial Zone during the Abacha Regime.

His Excellency, Chief Dr. Sam Onunaka Mbakwe was real Excellent and a Great Igbo Leader who commanded the respect and love of the Igbo. He was given too many chieftaincy awards and accolades in his lifetime because of his numerous achievements. Prominent among the titles are: Aha-eji-aga Mba of Igbo Land; Ochi Ora of Imo

He was a great man who was humble enough to return to study for a doctorate degree in the university after he had served as a very popular governor.

That single act of humility made him shine like an ICON he was. He made the Igbo believe that no situation should be seen as an obstacle to success to greatness.

Hard work and determination made the difference. He stood out as a true Igbo man who loved the Igbo and served with commitment and dedication. He was a man that would never be forgotten in Igboland

Content created and supplied by: WakaAboutAfrica (via Opera News )

Before Speaking To Anyone Today, Say These Prayers For God's Help