By Socialmediajagaban (self media writer) | 5 months ago 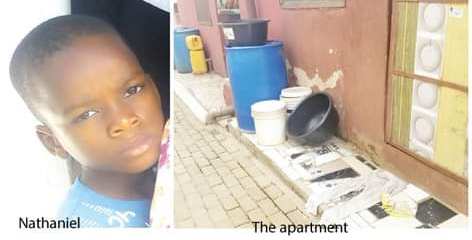 Lagos over piece of fish "/>

In a recent news shared by Linda Ikeji blog, a man beat up his 7year old son to death in Lagos over a piece of fish in Lagos.

He is identified as Saviour Aniefok, and he has been on the run after the unfortunate incident. The incident happened in Shangisha, Magodo phase 2, Lagos state.

Reports claim that he tortured the boy, Nathaniel, after accusing him of stealing a piece of fish belonging to his customer.

The suspect is said to be an artisan, who repaired a faulty microwave oven for a customer. The customer was said to have given him a piece of fish to test it with the microphone. However, he forgot to return the fish after delivering the microwave.

His son however ate the fish, and when he asked him, Nathaniel denied. He beat and tortured the boy who later lost his life, he went into hiding and took Charles along to conceal the crime

The neighbours who heard the shouting and crying for help, claim that he was fond of torturing his son.

Mr. Savour denied torturing his son to death, he claimed he fell and hit his head on the floor, while fleeing from punishment.

What could make a father beat his son to death for stealing a piece of fish?

It's sad that a man would torture his son to death, because of a piece of fish. This goes a long way to show the level of poverty most Nigerians are subjected to.

There are several other ways to disciple your child over stealing, than beating him up to point of death over a stolen piece of fish.

Only poverty would make a father subject his own son to such torture for stealing only a piece of meat. I believe if he was rich, such would never happen.

This sort of stories speak ill about Nigeria.