"Nnamdi Kanu Begged Me For 450k During His Wedding, Yet He Sent Gunmen To Attack Me"- Uwazuruike

By Oluwaseyin5 (self media writer) | 1 year ago

According to a video released hours ago, the leader of Movement for the Actualization of the Sovereign State of Biafra (MASSOB) "Ralph Uwazuruike" has verbally attacked his fellow agitator Nnamdi Kanu. Ralph Uwazuruike had earlier alleged that the IPOB leader, Nnamdi Kanu hired some gunmen to attack him last night. 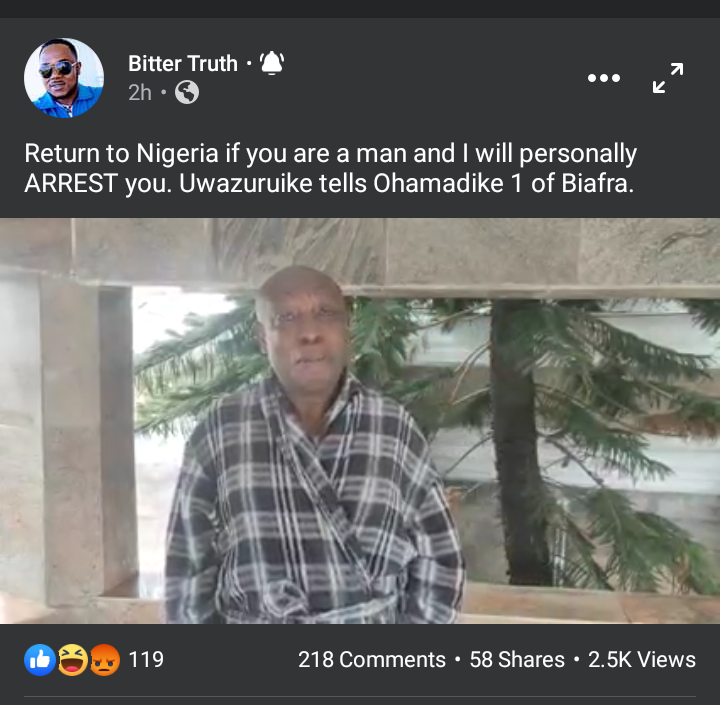 Ralph Uwazuruike revealed that he has known Nnamdi Kanu to be very tricky and mischievous, therefore irrespective of his evil ways he can track him down immediately. He added that Nnamdi Kanu had begged him during his traditional wedding ceremony for a financial assistance of 450 thousand naira but Kanu began to neglect him. On the day for the fixed ceremony, Uwazuruike made it known that Nnamdi Kanu asked for police escorts during the wedding because he knew Uwazuruike would be invited and that he may attack him. Irrespective of the presence of the police officers, Uwazuruike called some of his boys who hijacked Nnamdi Kanu to show that he's physically greater than him. He concluded by telling Nnamdi Kanu to avoid pushing him which would result in a tough battle because he's prepared to face him anytime he comes back to Nigeria. He also added that he is greater than Kanu and the members of the eastern security network and he can arrest all of them if he takes more actions to speak against him. This reported video by Ralph Uwazuruike really means that Nnamdi Kanu and the members of the eastern security network are in trouble. They have attacked several innocent people, government facilities including his own fellow Biafra supporter. What do you have to say about this?