In An Interview With Channels,See What The Army Said About The Farmers Allegedly Killed By BokoHaram

Ever since the tenure of the former president Goodluck Ebele Jonathan which lasted from 2010-2015, the Boko Haram terrorists Has been terrorizing Nigerians especially those in the north east. Due to their incessant attacks on the Nigerian army or innocent citizens, they got recognized internationally as a terrorist organization.

During Jonathan's tenure, there were quite a handful of major attacks from the terrorist group which erupted protests for his impeachment. The abduction of the chibok girls was one of the straws the broke the camels back; the nation was thrown into mourning as 276 young energetic girls were abducted by Boko Haram on the 24th of April 2014.

Ever since president Muhammadu Buhari got into the presidential seat in 2015, the terrorists have continued their attacks. However, on the 28th of November, 2020; over 45 rice farmers were allegedly slaughtered by alleged Boko Haram members in the village of Koshobe in Maiduguri. It was really a bad day for the residents.

Lots of blames have been thrown at the Army and the chief of staffs including the president himself, citizens are really yearning for the extermination of this insurgency before we go down with it. I must also commend the Nigerian army for their incessant endeavours to combat the Boko Haram terrorists. Gallant soldiers are risking their lives to keep us safe, I believe they demand some accolades too. 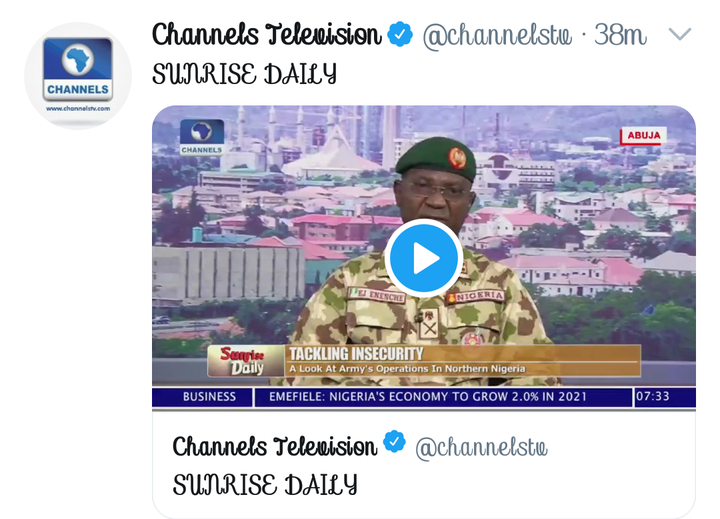 In an interview with channels TV this morning, The Nigerian army represented by Coordinator of Defence Media Operations, Major General E.J Enenche has addressed the nation concerning the killing of the farmers and other insecurities in the north. Lots of questions have been bombarded at him by the news reporters. 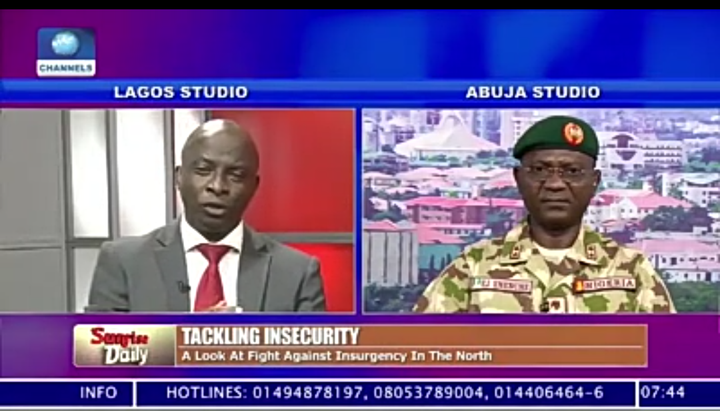 However, At the time this article was written the live broadcast is still on featuring lots of dignitaries. The live broadcast was captioned 'tackling insecurity' and it has really been enlightening. 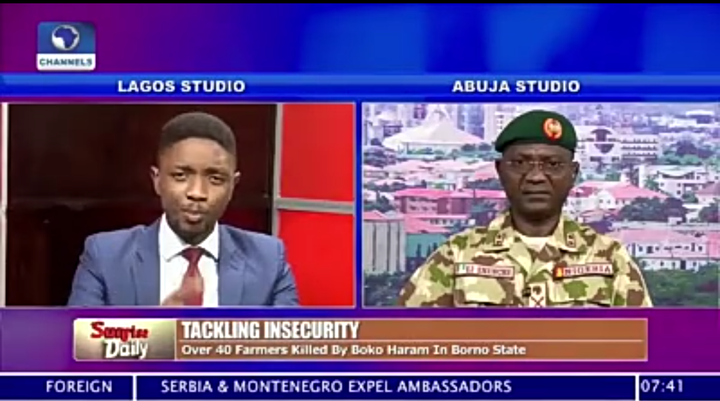 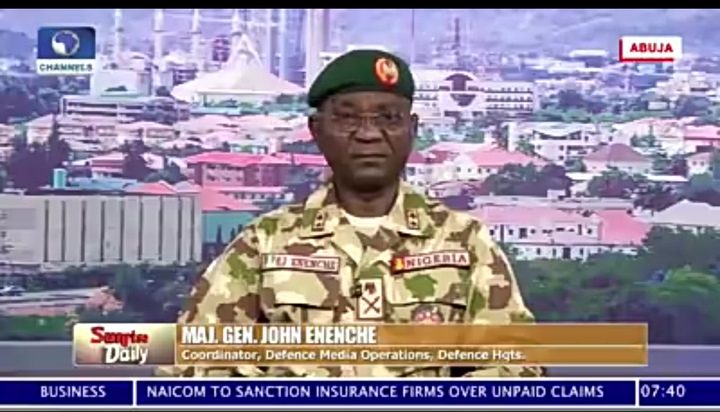 Enenche highlighted that these terrorists has informants in some of the north east villages, and that is why sometimes when the Army crosses a village for patrol, on their way back they sometimes run into an IED. He went further to say that the army Has a robust package to fight insurgency.

When he was asked if the Nigerian army has informants disguised as villagers too, he blatantly refused to answer the question saying it'll jeopardize plans.

Enenche also emphasized that the army are setting up schemes for farm patrols and market patrols in the north east for stability. Here are reactions from people. 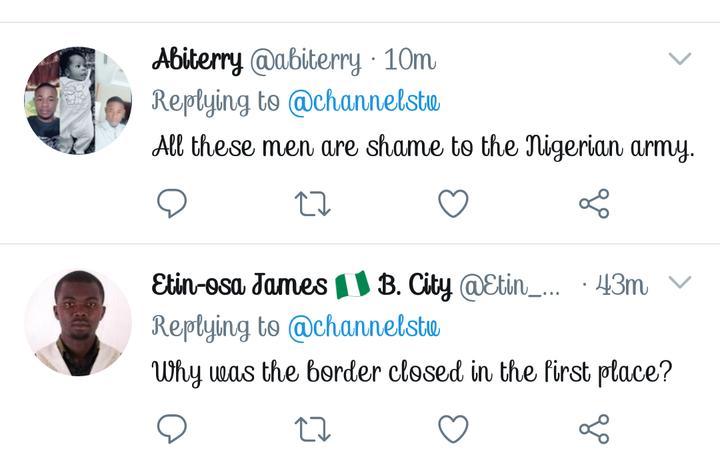 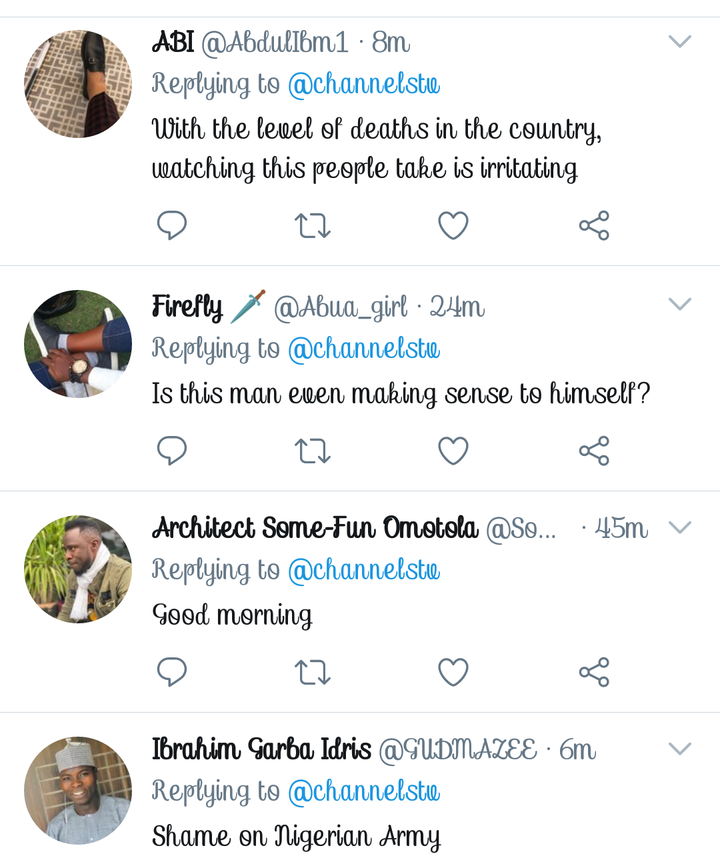 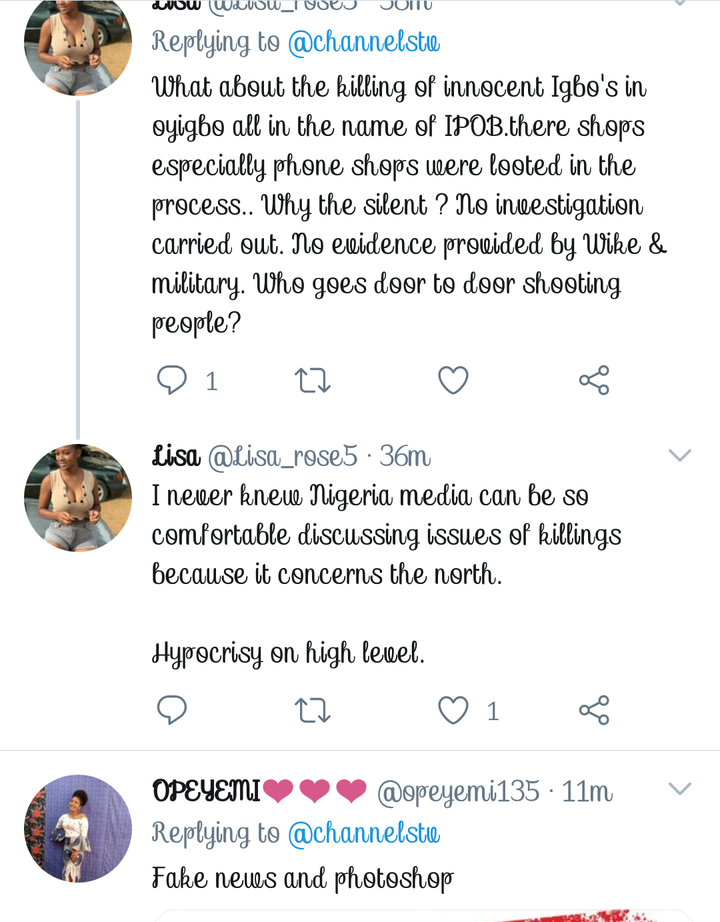 What do you think

how to make garden egg sauce oldest tortoise in the world ten importance of agriculture usman where is big brother naija house located
Opera News is a free to use platform and the views and opinions expressed herein are solely those of the author and do not represent, reflect or express the views of Opera News. Any/all written content and images displayed are provided by the blogger/author, appear herein as submitted by the blogger/author and are unedited by Opera News. Opera News does not consent to nor does it condone the posting of any content that violates the rights (including the copyrights) of any third party, nor content that may malign, inter alia, any religion, ethnic group, organization, gender, company, or individual. Opera News furthermore does not condone the use of our platform for the purposes encouraging/endorsing hate speech, violation of human rights and/or utterances of a defamatory nature. If the content contained herein violates any of your rights, including those of copyright, and/or violates any the above mentioned factors, you are requested to immediately notify us using via the following email address operanews-external(at)opera.com and/or report the article using the available reporting functionality built into our Platform 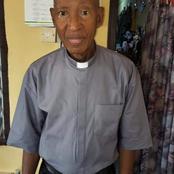 Opinion: If You Stop Doing These 3 Things, Your Boyfriend May Marry You This Year 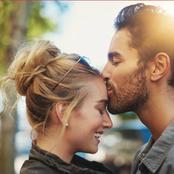 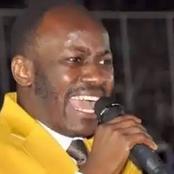 Girl Like Nengi! Checkout The New Title She Just Added to Her Social Media Profile 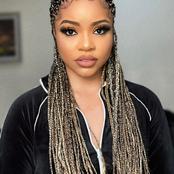 Opinion:Is there a silent war going on in Orlu, Imo State? 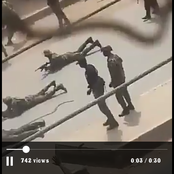 The Days Of little Begining: Bishop Oyedepo Poster spotted In 1994 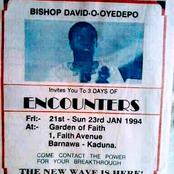 From Being Popular Prophet To Being A Laughing stock, The Story Of Onyeze Jesus 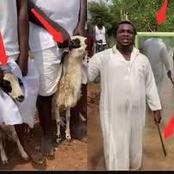 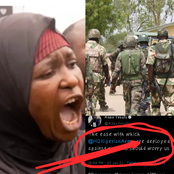 Opinion: Nobody Should Blame Gov. Hope Uzodinma, Rather Blame Kanu For What Happened In Orlu 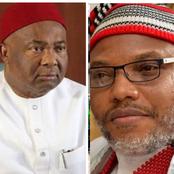 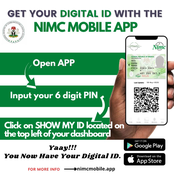