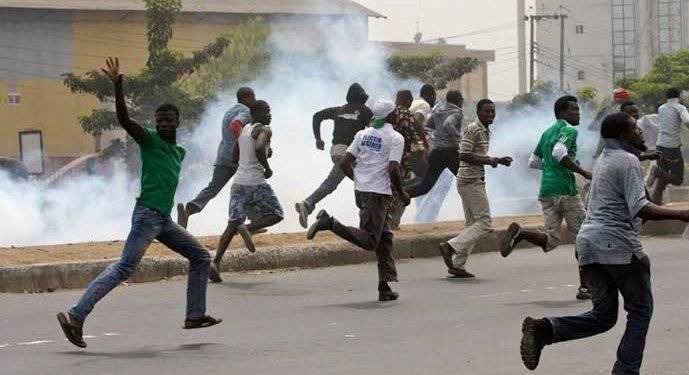 The Police Command in Osun on Monday said three persons were shot during a failed kidnapping attempt at Koka Village in Ibokun Local Government Area on Sunday.

SP Yemisi Opalola, Spokesperson of the command in a statement, said suspected hoodlums armed with guns, invaded Koka Village at about 11:45p.m. on Sunday to kidnap residents.

Opalola, however, said residents and hunters of the community were able to mobilise and engage the hoodlums in a gun battle, thereby aborting the kidnap operation.

“At about 11:45p.m. on Sunday, unidentified hoodlums attacked Koka Village in Ibokun Local Government Area and attempted to abduct some villagers.

“Consequently, villagers and hunters mobilised and engaged the hoodlums in a gun battle and librated themselves.

“Three villagers and hunters, however, sustained bullet wounds during the rescue operation.

“The injured victims are receiving treatment at the State Hospital in Asubiaro, Osogbo and they are responding to treatment.

“The police have, however, drafted officers to join the locals to carry out a cordon and search operation in the area.

“Efforts are also ongoing to apprehend the fleeing culprits,” she said.

Chinyere said this in a telephone interview with the News Agency of Nigeria in Abuja on Monday.

The General Overseer said the repentant militants turned a new leaf after a divine encounter through evangelism organised for some of them in their various camps.

He said, “I preached to them and many of them hearkened to salvation call and gave their lives to Jesus Christ.

“Before I embarked on this move, I bought some estates to relocate them. Initially, when I preached to them, because I could not relocate them out of their place, it was easy for them to go back to their old ways.

“So, I decided that the best way to approach them is to change their environment and that became the first step of their healing process.”

The cleric said he took them to the estate, got them baptised and began to teach them the words of God.

The Anambra State Governor, Willie Obiano, has said a report that the Federal Government has declined to give the state a licence to run an international airport is false.

The report said the Federal Government only gave the state the patent to run a domestic airport.

But a statement on Monday by the Commissioner for Information and Public Enlightenment, CC-Don Adinuba, described the story as false and the handwork of detractors.

He said the airport remained an international airport and asked members of the public to disregard the report, describing the purveyors of the “false story” as “a faceless group of hired propaganda guns”

Meanwhile, the Minister of Finance, Budget and National Planning, Zainab Ahmed, on Monday admitted that Nigeria’s economy was facing a difficult time, saying states must improve their internally generated revenues.

Ahmed, who stated this in an interview on a daily breakfast show on the Nigerian Television Authority, Good Morning Nigeria, stated that the money shared at the March Federation Account Allocation Committee meeting was short of N50 billion.

The minister was speaking on a controversy generated by a claim by the Edo State Governor, Godwin Obaseki, that the Central Bank of Nigeria printed N60 billion in March to augment the money shared at March FAAC.

But the minister and the CBN Governor last week dismissed Obaseki’s claim.

In the interview on the NTA on Monday, the finance minister stated the country’s economy was stabilising from the recession, which the country exited a few months ago.

Content created and supplied by: 9jaboy2 (via Opera News )

Many Killed, Others Kidnapped As Bandits Attack Churches In Kaduna State.