One person was killed as Ayetoro residents clashed with officials of the Nigerian Customs Services(NCS) in Yewa North Local Government Area of Ogun State. 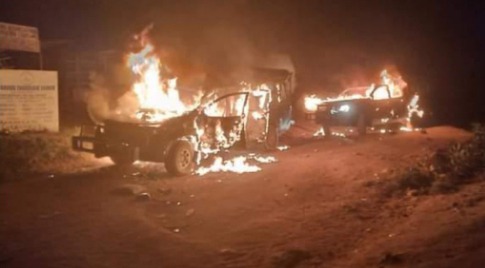 According to DAILY POST, the clash led to the burning of 3 vans belonging to the Custom and the shooting of a youth identified as Soliu.

While speaking, an eyewitness identified as Razak Adeyemi, revealed that the saga started after a heated argument between one of the customs officers and a suspected smuggler who is a resident of Ayetoro.

In less than an hour, about four fully-loaded Custom Hilux vans arrived the community and started shooting randomly in the air causing panic.

The youths who were angered by the shooting engaged the customs officers in a violent face-off.

Narrating the incident, Adeyemi said that it all started as a normal argument between a man and a customs officer at Oke Rori, Ayetoro. He said that the argument was resolved by the residents and the other military officers.

He added that about four custom vans loaded with officers invaded the community after one hour. He said that they were shooting at the residents and frightening everyone in the community hence the deadly engagement by the community youths.

The incident has been confirmed by the spokesperson of NCS, Ogun Area 1 Command, Hammed Oloyede, assuring that investigation is underway.