Three suspects have been arrested in Ogun, for torturing a man to death over iPhone.

By Subcaster (self media writer) | 1 month ago

Following the report by a Bola George, three persons have been arrested by the Ogun State Police command, for the alleged torturing to death of a Tunji George, over an allegation of stealing an iPhone 6. 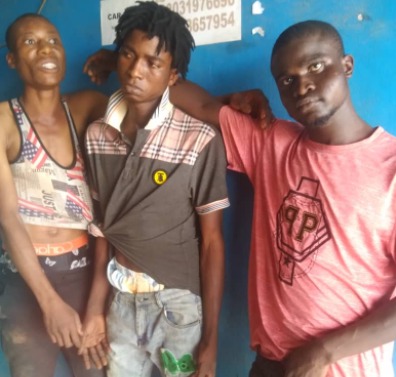 The three suspects, namely; Felix Sunday, Oluwatobi Micheal, Shomuye Musa were arrested by the Onipanu divisional headquarter, after it was learned that the suspects had tied and tortured the deceased in a hotel at Iyana Iyesi Ota, in Ogun State.

It was learned that when the accused suspected that the deceased was about to give up the ghost, they had rushed him to a hospital, but before they could get to the hospital, the victim had given up the ghost.

On getting the report made by the sister of the deceased, Bola George, the DPO of the Onipanu Divisional police headquarter, CSP Bamidele Job, had ordered his men to quickly get to the scene and apprehend the suspects.

Confirming the incident, the spokesperson of the State police command, had said the Commissioner had ordered the quick transfer of the case to the homicide section of the state criminal investigation and intelligence department for further investigation and diligent prosecution following the confession of the suspects to the crime.

The commissioner also reiterated that his administration will not condone any form of jungle justice.