By Legitimatenews24/7 (self meida writer) | 1 months

An army personnel has allegedly shot himself in the head according to reports from Dailytrust newspaper.

The deceased soldier was among some of the gallant men that were saddled with the responsibility of keeping the insurgents in the troubled northeastern Nigeria at bay.

His colleagues at the 212 battalion in Maiduguri stated that the deceased soldier previously exhibited signs of depression before allegedly shooting himself in the head.

Corporal Killa Jima committed suicide after allegedly turning his own rifle on himself, while attached to a patrol team at Banki, in Borno.

One of the closest colleagues of the now deceased soldier spoke under the conditions of anonymity, that his friend reportedly took his own life after falling into depression, due to his overstay in the counter insurgency campaign in the north east.

The deceased soldier started exhibiting symptoms of depression allegedly linked to his long stay and exposure to constant battle and deaths of some of his comrades.

Over the years, experts have called for soldiers fighting insurgency in the northeast to undergo constant psychological re-evaluation so as to prevent cases of depression and suicides among service men.

There have also been calls for the Nigerian military to prioritize the frequent and constant rotation of service men in the northeast, so as to prevent soldiers from staying too long, which may expose them to depressive triggers. 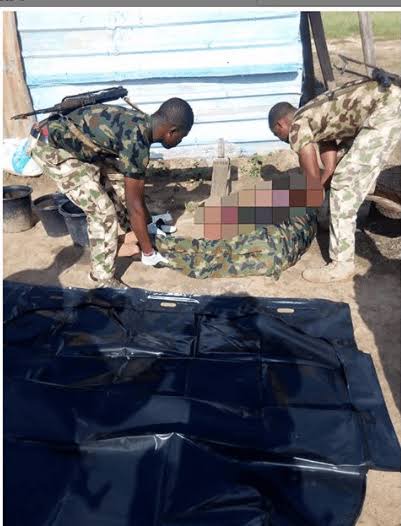