He Abused The Girl Inside A Moving Taxi And When He Was Done, Read What He Said To Her

A report was made by a young lady whose friend was attacked and assaulted inside a moving taxi in Port-Harcourt by a co-passenger. The young lady took to her social media page to cry out for justice for her friend that was harassed by her co-passenger yesterday. Some men have become heartless and they have no regards for women again in the society. I was literally shocked when I saw the video that the victim secretly recorded in the taxi after her co-passenger attacked her and started mocking her. It is quite sad that assault, harassment and rape are becoming the new normal in our society. Lots of women endure all sorts of assaults in the society but what transpired between this lady and her co-passenger left so many people in awe. According to the victim’s friend, her friend (who has now been admitted into the hospital) boarded a taxi in Port Harcourt. Her destination wasn’t disclosed but according to the lady, she was in the car with a young man and the driver. So, at some point during the ride, the guy made advance towards this girl by asking for her name, her phone number and other information because he was interested in her. The victim’s friends did not mention what her friend told the guy after he initiated the conversation that infuriated him but the response probably made the guy furious and the next thing he did was start beating this girl inside the taxi. 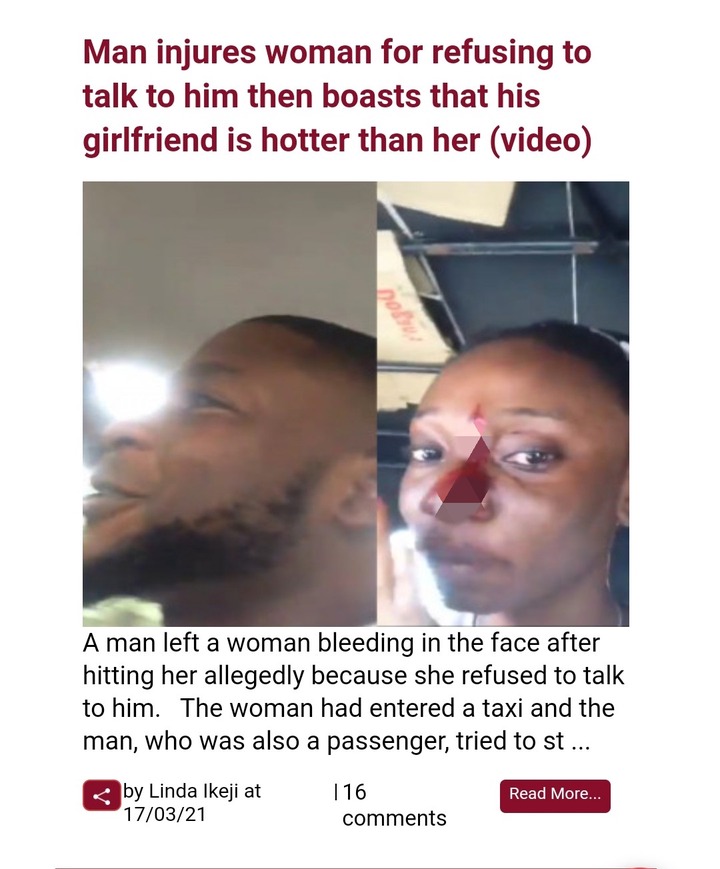 He punched her in the face, very close to her left eye and blood started gushing out, as seen in the video. What the driver later did to stop the man from beating the lady was not mentioned but the girl made a smart move after the guy punched her in the face. She knew there was no way she could handle the guy, so she brought out her phone to capture the guy’s face in order to be able to report the incident in the Police Station and arrest the guy. The guy had no idea that the girl was recording him, he was heard boasting that ‘The girl na worwor girl, na him make I dey vex self.’ The guy boasts that the girl was not even as hot as his girlfriend. He was laughing but little did he know that the girl was getting his face on camera.

See the guy laughing not knowing he was being recorded 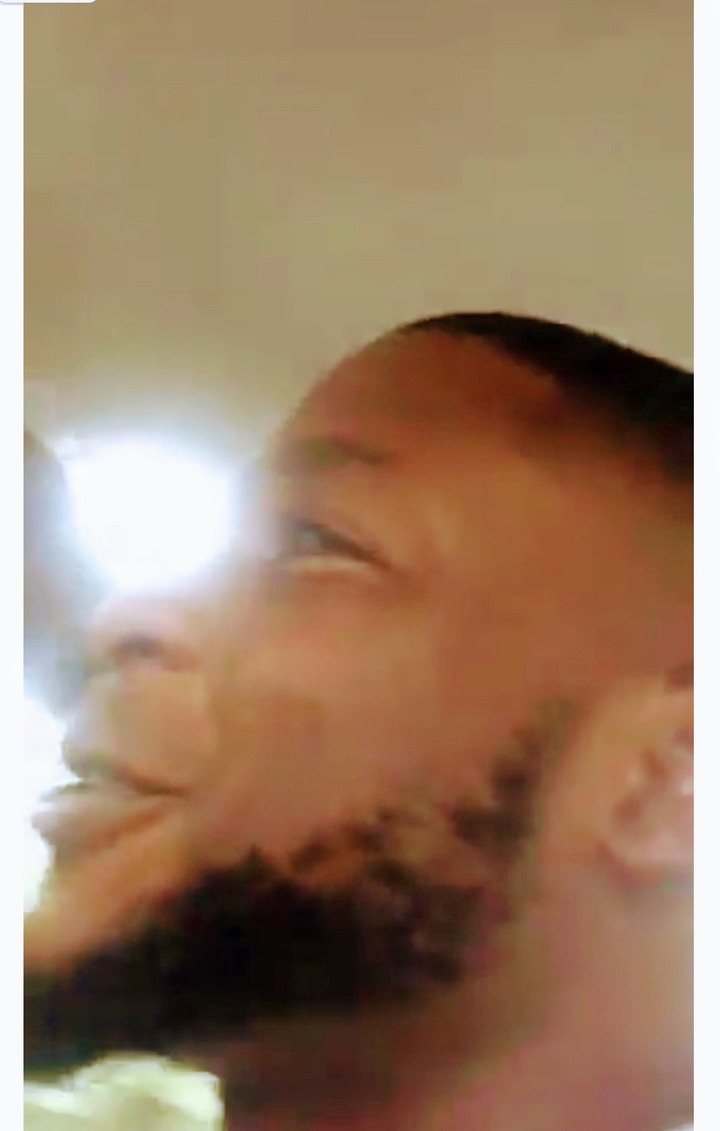 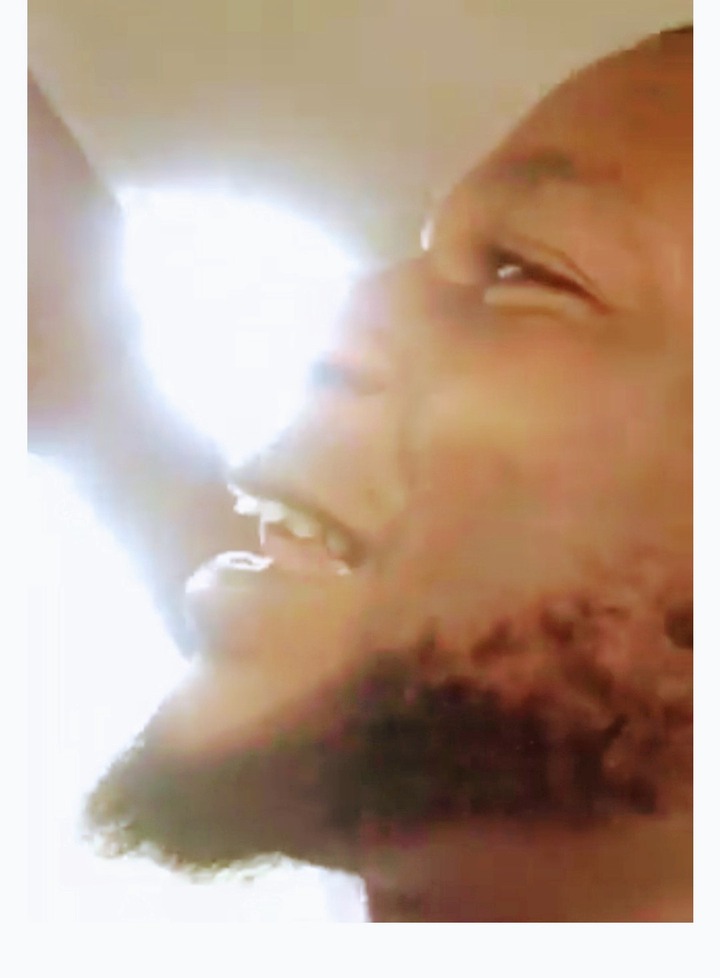 The girl alighted from the taxi and found a way to reach her friends and they took her to the clinic. On her way to the clinic, she recorded her face to show how the guy hit her and left her bleeding. Fortunately, the girl has friends who could pursue the case for her. So, they took the video she recorded to Ozuoba Police Station in Port-Harcourt and they were able to track the man. It was gathered that the man has now been arrested and he is currently in police custody for harassment. 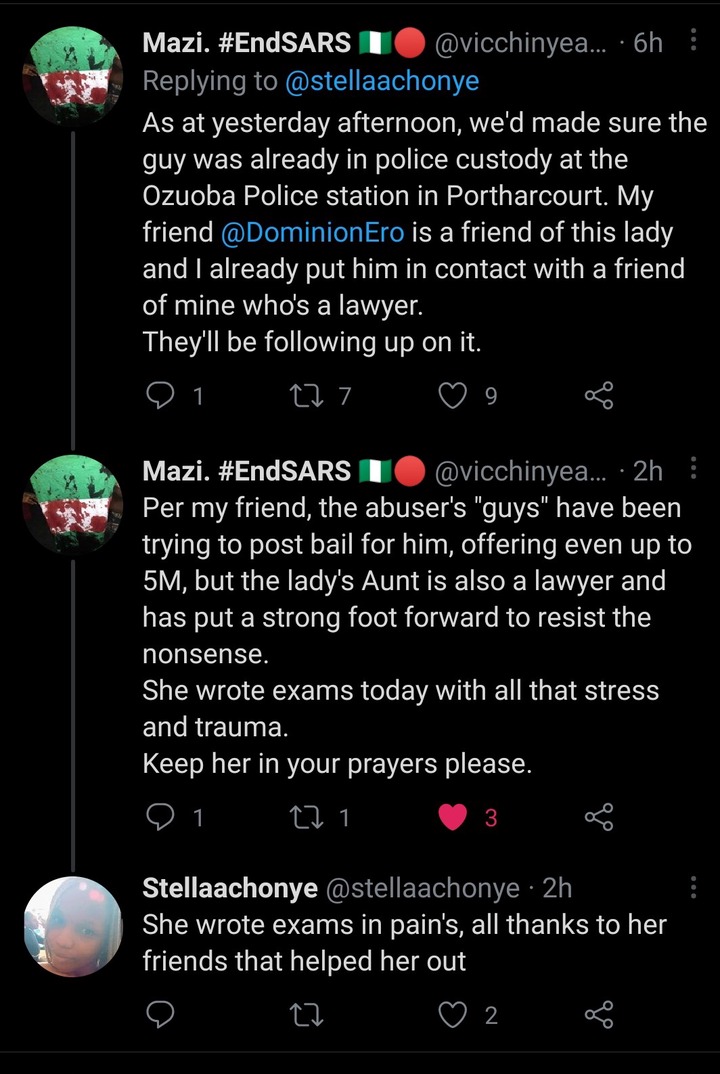 The girl is a student and she had an exam today. Her friends said ‘She wrote her exams today with all the stress and trauma. Keep her in your prayers’. The uncensored pictures of the lady’s face would have been posted but it was quite brutal and distasteful. 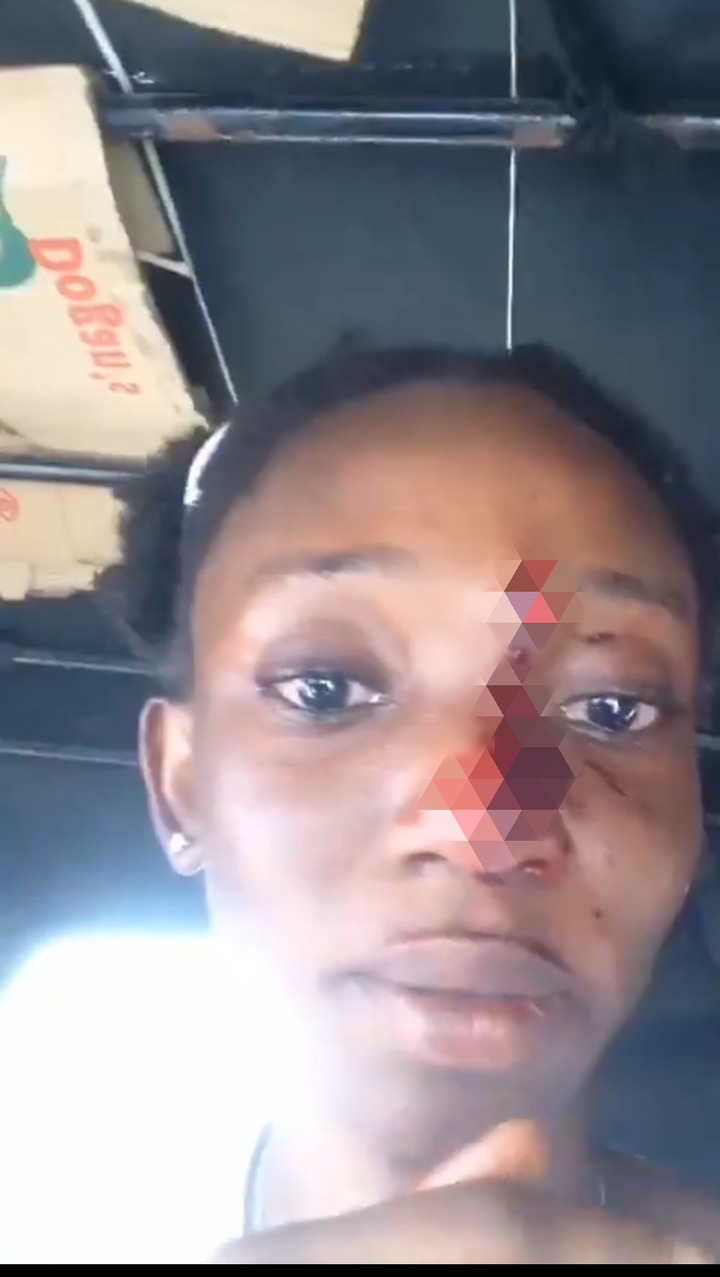 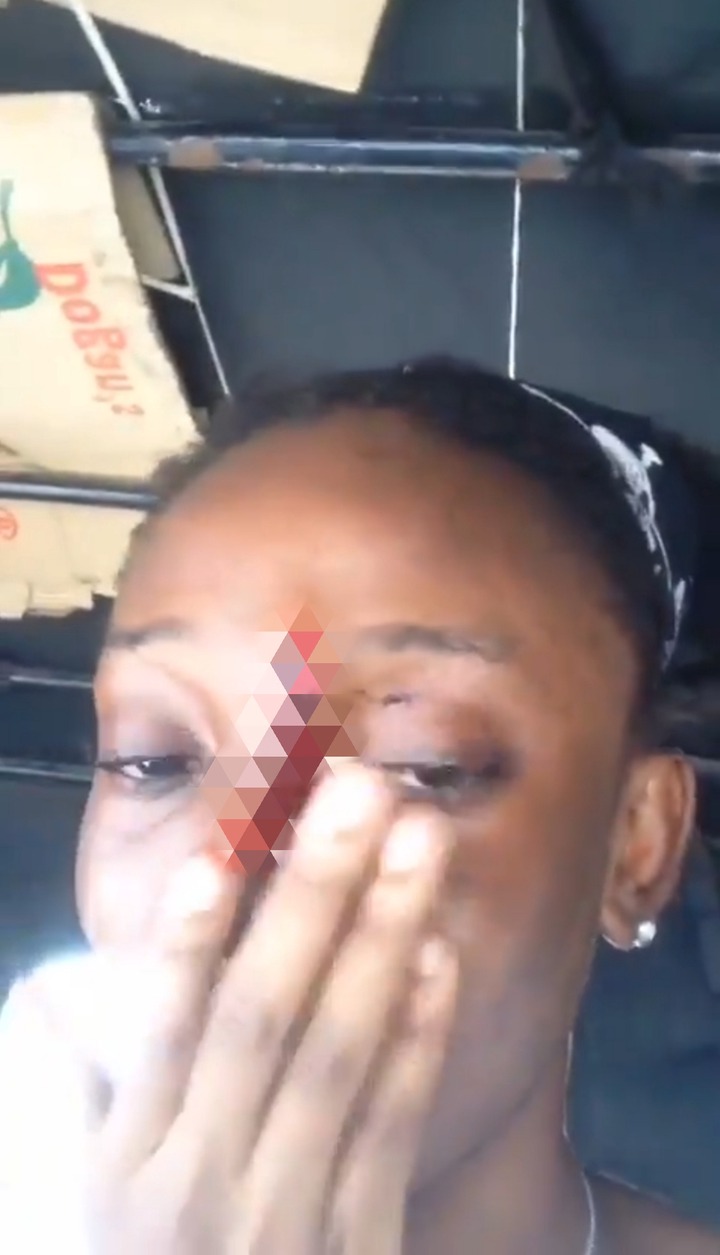 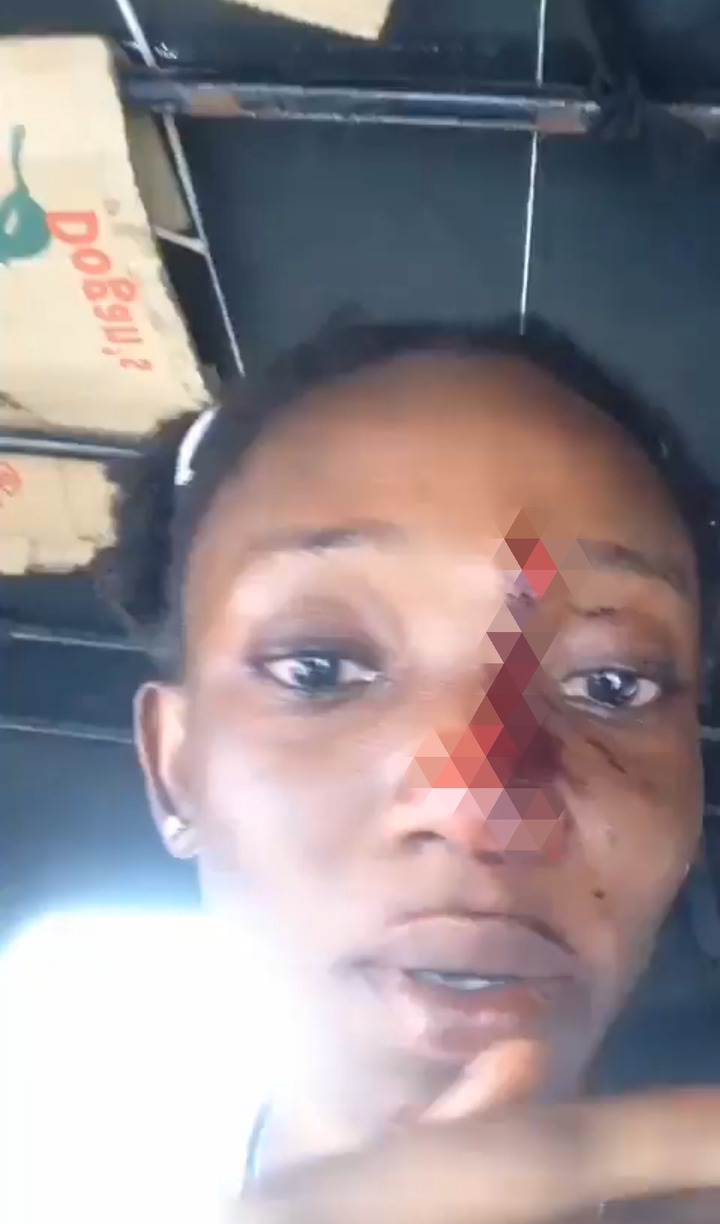 If not because the lady was able to secretly record the face of the abuser, he would have gotten away with the crime. The lady allegedly refused to give him her number and probably she said something he did not want to hear and the next thing was punch her in the face to the extent that blood started gushing out of her eyes. Are women no longer safe in the society again? All these gender based violence needs to stop because women are not punching bags.

"Congratulations Nengi": Fans Send Message To Nengi As She Launches Her Brand Today

You Might Not Believe Her Age Due To Her Dressing; See The Age And Latest Photos Of Mercy Kenneth

Don't Say "Do You Like A Glass Of Water?" Say This Instead Along With 15 Common Mistakes In English Language

Top 5 best Magical Movies Ever Made.

After Burna Boy Linked Up With Don Jazzy, Fans Dig Up What Burna Boy Told Don Jazzy In 2017

Nobody Is Saying Anything, We Are All Just Quiet And Adjusting, For How Long? Man Laments On Twitter