Today's Headlines: Arrests Kingpins Not Prosecuted — Dansadau; How To Organise, Not Afghanise (Column) 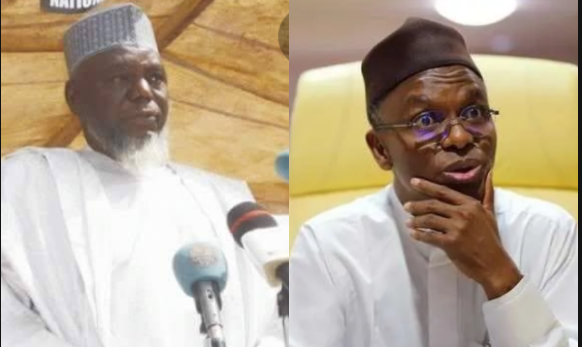 It was him, in a widely reported case, who rejected an exotic car gift from then-Governor Sani Yerima of Zamfara State. Dansadau’s colleagues in then-National Assembly from Zamfara were offered similar car gift. His reason then was that Yerima should have used the money he used to purchase the car to improve the lives of the people of the state. 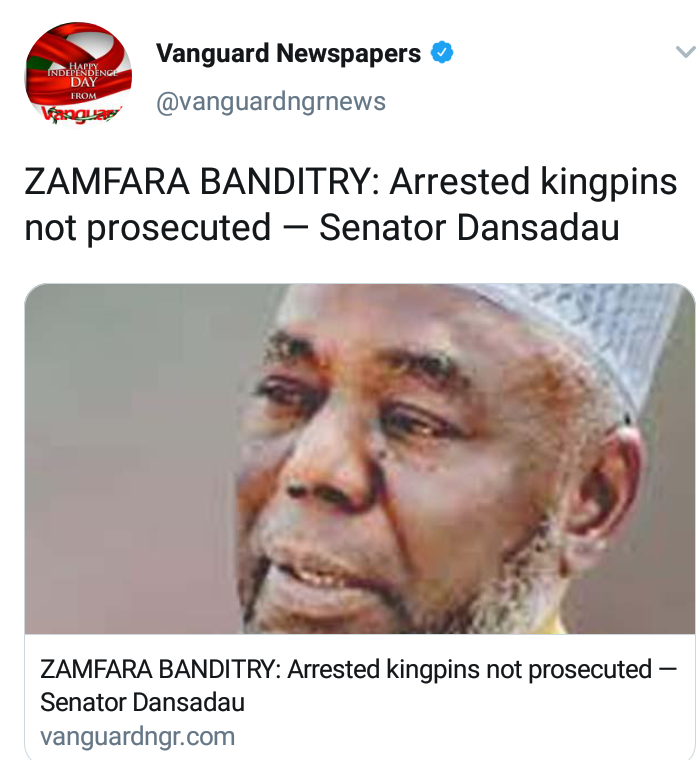 After serving two terms in the Senate, he decided not to seek re-election and returned to his farm in Zamfara. Dansadau has since formed the National Rescue Mission which he presently oversees.

In this interview, the senator expresses happiness over the strategy (suspension of telecom services) in Zamfara by the Federal Government to stem the activities of bandits and kidnappers in the state even as he urges that same approach should be replicated in other parts of the country experiencing similar problems. Excerpts:

COLUMN] How To Organise, Not Afghanise

Contemporary Africa comprises countries cobbled together by colonialists for their own interest. In the case of Nigeria, British colonialism was, as playwright Ola Rotimi would put it, in the service of their ‘female king’. The two hitherto distinct halves of Nigeria (Northern and Southern Protectorates) have managed to stay together as one country for one century and more. But in recent years, it appears that the falcon is no longer hearing the falconer and things are falling apart… 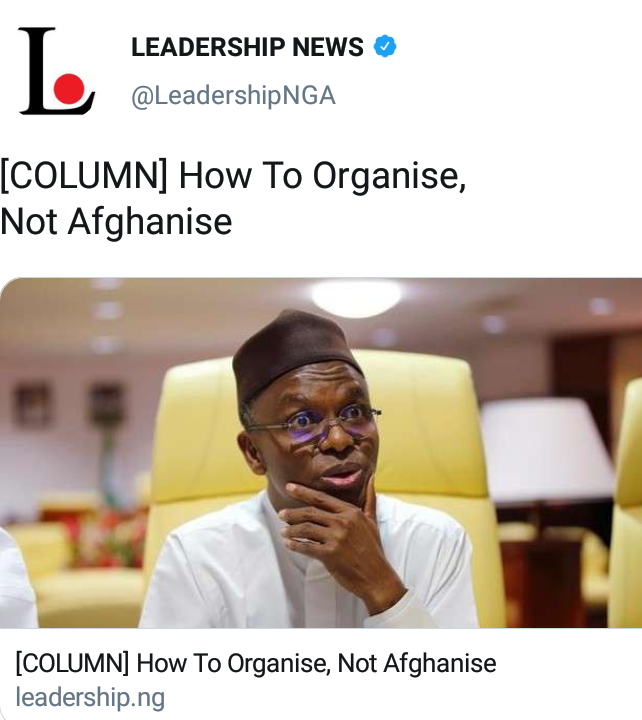 I am proud to be a Nigerian. I tell those who wonder how one can be patriotic in the light of our stultifying under-achievements that I am a firm believer in self-love. Although I am aware, for example, of the recent statistics released by StatiSense to the effect that in the first quarter of 2021, Nigeria’s Total Expenditure was ₦3.385 trillion with Deficit Financing at ₦2.293 trillion, I am still convinced that my country is not dead and buried.

My self pride will not permit me to advertise Nigeria as a shit-hole. Even if the rest of the world is de-marketing this patch of earth, it will not be with my assistance. It may not yet be the country of our dreams but it is all we’ve got to call our own. As we say in pidgin lingo, “Monkey no fine, but im mama like am”.

Vice President Yemi Osinbajo has charged the nation’s financial market dealers to collaborate with government with concerted efforts to tackling Nigeria’s housing problem adding that this will see to develop a housing blueprints for the nation’s teeming population. 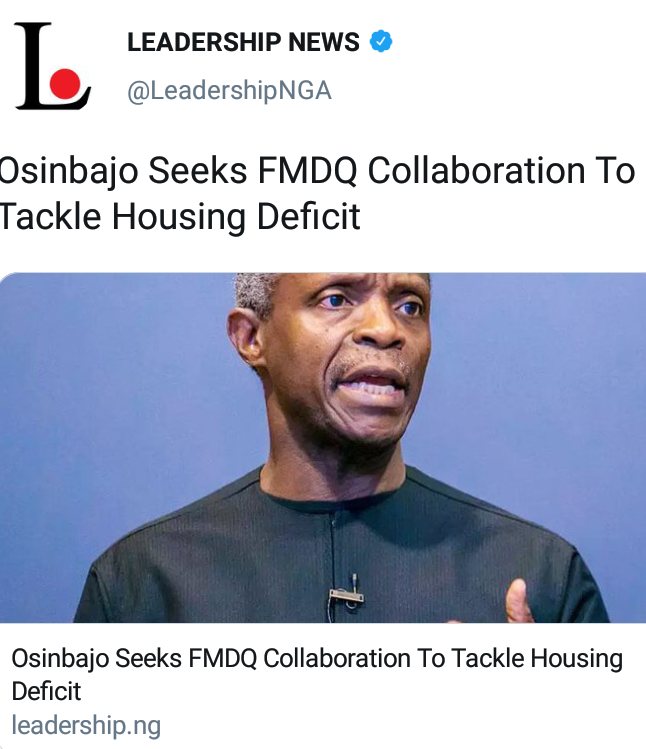 Osinbajo made this known at the State House, Abuja, when he played host to a delegation from the Financial Market Dealers Quotation (FMDQ) which is Africa’s first vertically integrated financial market infrastructure (FMI) group, strategically positioned to provide registration, listing, and quotation services, and is owned by the Central Bank and commercial banks in Nigeria.

He tasked the experts to develop an appropriate housing scheme model which will significantly transform the housing sector on a large scale and close the housing deficit gap in the country. He stated that economic experts had put housing deficit in Nigeria at around 8-22 million units, while the ratio of mortgage finance to GDP in the country is only 0.5 per cent, 31 per cent in South Africa, and two per cent in Ghana and Botswana.

Zamfara report on banditry: Two ex-Govs indicted, another for trial, 15 Emirs to be removed 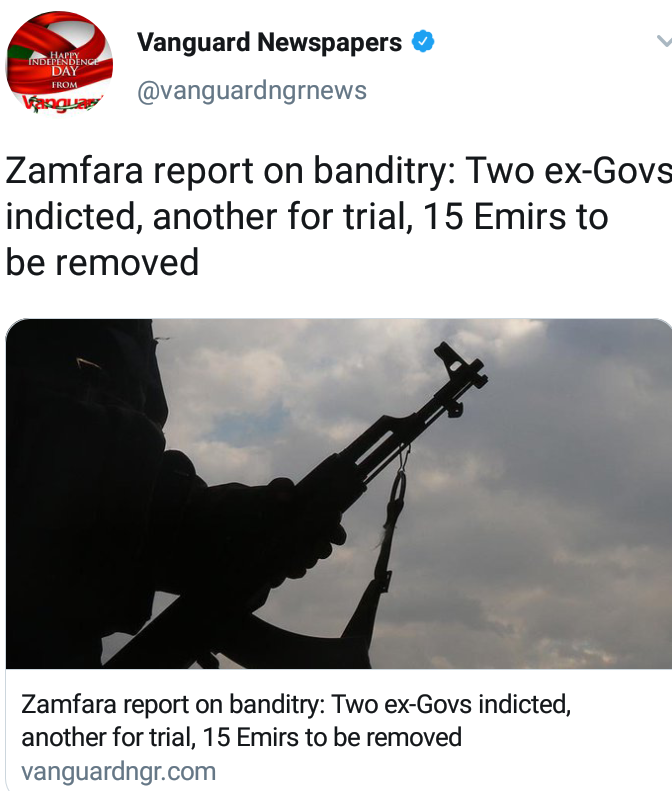 Then a foot note to the list: Bandits operated 105 camps from which they launched deadly attacks on Zamfara, kill and steal the people’s properties at will; their leaders identified.

But this is just a small segment of the chilling report of the high wire banditry raging in Zamfara, but has now spilled into several states across the country, and consequently putting national security in jeopardy.