The incident happened around 11:30 a.m. at Odo Ogun inward Asolo in the Ikorodu area of the state when the red High Capacity bus with passengers and coming from the Ikorodu end of the road lost control and rammed into the white Toyota Bus which was held up in a traffic bottleneck.

It was gathered that due to the loss of control apparently as a result of excessive speed, the High Capacity bus, after ramming into the bus, later veered off the road and landed on the road median. 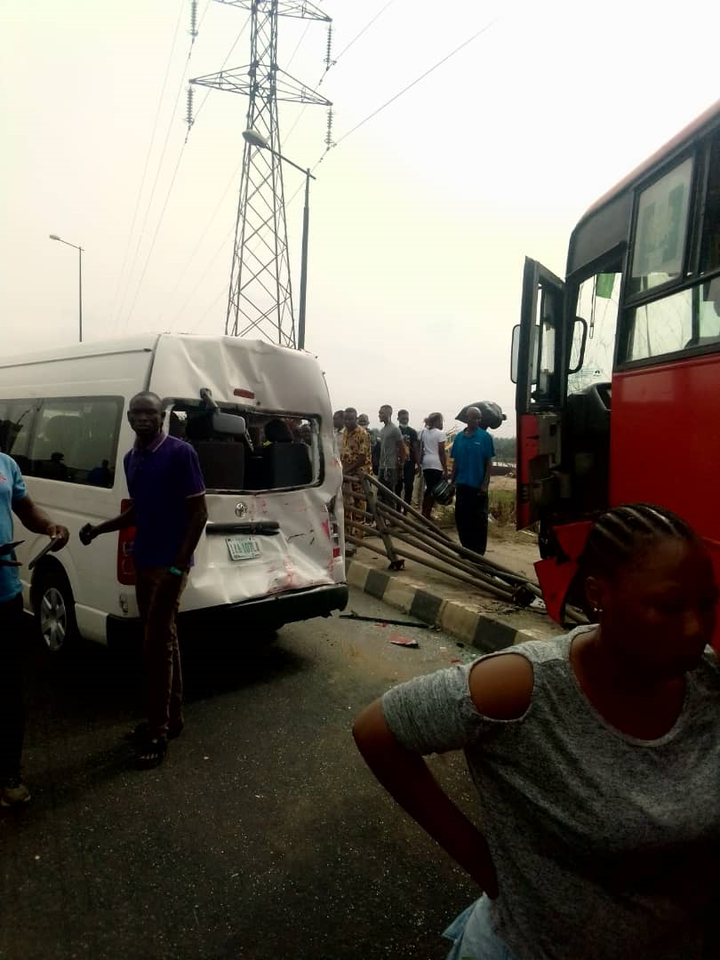 The accident caused a massive traffic gridlock on the road as the passengers in the red bus had to quickly jump out of the vehicle when it landed on the median after hitting the white Toyota bus.

The incident was announced by the Lagos State Transport Management Authority (LASTMA), an agency in charge of traffic management in Lagos State, which also disclosed on its social media platforms that its officials raced to the scene after receiving a distress call.

It was also gathered that upon arrival at the scene by the LASTMA officials and policemen that were stationed nearby, efforts were made to control the attendant gridlock while the officials revealed that there were no casualties during the incident.

According to LASTMA which also announced the incident on its Twitter handle @followlastma: There has been a report of an accident at Odo Ogun inward Asolo in Ikorodu area of Lagos State involving red High Capacity Bus which rammed into a Toyota Bus and later landed on the road median.

"Effort is on to move the vehicles away from the scene of the incident while our officers are on ground doing the needful and controlling the traffic which is better now."

Exclusive: How Kwara United Players Pushed Their Vehicle in The Night as it Broke Down

Israel Vs Gaza: Over 150 Rockets Fired Get ‘Intercepted’ By Israel Defense Forces

3 Ways Tuchel Could Line Up Against Arsenal With Gilmour, Ziyech, Havertz Leading The Attack

Lagos state government to launch buses to replace okada/keke in the state.