Ganduje's Convoy Gets Attacked By Gunmen A Second Time, 3 Of His Men Sustain Injuries

By Rukz (self media writer) | 1 year ago 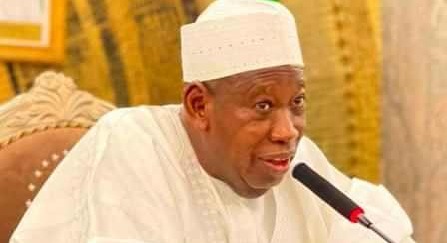 The Convoy of Kano State Governor, Dr Abdullahi Ganduje, was reportedly attacked by gunmen on Tuesday night while returning to his state from Zamfara. The incident led to the injuries of Three policemen attached to the Convoy.

The security operatives in the Governor’s convoy noticed the Bandits after them and immediately engaged the suspected bandits in a gun duel. The scene was said to be very bloody and fierce because,at that time, the governor's wife,Prof Hafsat Ganduje,was in the Convoy during the attack.

This happened just after it was reported that,suspected bandits killed a lawmaker, representing Shinkafi Constituency in the Zamfara House of Assembly, Muhammad Ahmad, on Tuesday night.Ahmad was killed on his way to Kano by gunmen, who also kidnapped the lawmaker’s son and driver, just as the bandits were said to have laid siege on Zamfara, Katsina, and Kano Road, near Shema on Tuesday.

The governor and his wife were flown to Abuja in a chopper from Jos after the incident. Reports had it that, this is actually the second time that, the governor's convoy is getting attacked. It was first attacked in October 2017 by armed robbers at Hayin Kibau, en-route Jos, the Plateau State capital from Abuja.