By Empowerment_gist (self media writer) | 1 year ago 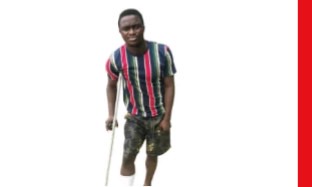 One Mr. Adeyemi Salau who was identified to be a Lagos Clearing Agent in his interview with Tobi Aworinde on how Federal operation Units of the custom service shot him on his leg at Berger Checkpoint. The 33year old man when asked on why and where the incident happened says "The Incident happened on March 17, 2021 at Port and Terminal Multi services Limited in Lagos State. I was driving a Toyota RAV4 with my client sitting besides me. The Nigeria Custom has given me a compromise value for the car which I paid. It was that same day in Berger where I was stopped by Federal Operation unit. There was an heavy traffic and that place was blocked which the officer that stopped me started shouting on me to come down which I did. He wanted to stab me which I doges and he hit the car, immediately I want to drop my leg he shot me."

He was asked again if the man shot him intentionally or by mistake.

He said "He purposely shot me. It wasn't an accidental discharge, I said oga you shot me and he replied "I will shoot you again" and I began to crawled on the ground as I was trying to get people's attention by shouting 'I've been shot! And they didn't allow any one to carry me. Immediately my boss called and I told him that I was shot by customs and immediately I said that he collected my phone and put it in his pocket. After everything they left me there which I managed to cross to the other road to break a bike which took me to the hospital. Later in the day my wife called my number to asked how was work and the officer picked the call and told me wife to come and carry my corpse at Ikeja."

Opinion: Is this action done by this officer good? Use the comment box to shared your opinion.

Content created and supplied by: Empowerment_gist (via Opera News )