Internet fraud is known as the use of Internet services or some form of software that has Internet access to defraud victims or take advantage of them. This is done in such a way that the victims are unaware of what is about to befall them.

As of today, the "Internet crime schemes steals millions of dollars each year from victims" and continue to carry out their devious schemes through the Internet by numerous methods.

Below are two men who were recently caught and are said to be "newly-recruited members of a cybercrime syndicate". Currently they have been jailed in Abuja for attempting to defraud people.

The story is as follows: 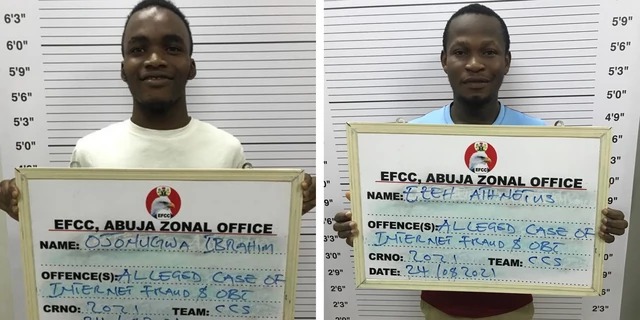 Ibrahim Ojonugwa and Athnetus Ezeakunne were held accountable for their unlawful acts by the FCT High Court, Apo for attempting to commit cyber fraud.

EFCC better known as "The Economic and Financial Crimes Commission" had earlier arrested both men for deliberately posing online with fake identities to defraud innocent victims.

It was discovered by EFCC, that the two criminals made use of the Telegram messaging App to get across and communicate with their victims.

The two joined this cybercrime "syndicate that engaged in gift card, iTunes and Bitcoin fraud". Due to the gravity of their offense, they had violated Section 95, which is "punishable under Section 322 of the Penal Code Act Laws of the Federation (Abuja) 1990".

Both Ojonugwa and Ezeakunne were found guilty to the charges they were caught in. And they were then sentenced two months each in jail, with N200,000 fine each, by "Justice E. Ekpe".

At the end of the hearing in court, the judge also took away their phones and sent the devices to the Federal Government.