By Olatunde2 (self media writer) | 10 months ago

A delegation from the Niger Delta Development Commission (NDDC) on Wednesday thronged the Ikot Oboroenyin Edemeya country home of Late Sir Gabriel Sampson Ekere to commiserate with a former Managing Director, Obong Nsima Ekere, and other members of the family on the loss of the elder statesman.

Accompanied by directors of the Commission, NDDC Interim Administrator, Dr Effiong Akwa, was received by the chief mourner, Prof Aniekan Ekere, on behalf of the family.

Akwa said he knew the late Sir Ekere as a great educationist, church builder, icon and great family man whose legacies will live on.

He maintained that the deceased “left behind capable children who will fly the flag of the family and keep the family bond together”.

The MD prayed for the repose of his soul.

Obong Nsima Ekere in appreciating the delegation declared that he is glad that the commission he once served has shown solidarity with him and his family. 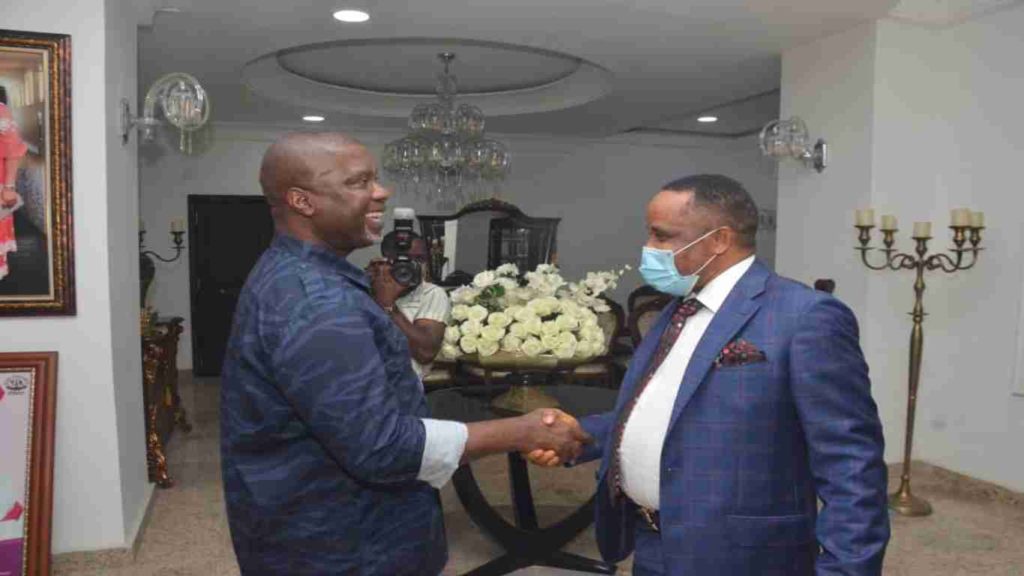 Ekere and Akwa sharing a handshake.

“I am happy that I’m associated with this commission,” Ekere said. “I congratulate you on the completion of the NDDC headquarters. I was overseas when I received invitation to attend its inauguration. Progress was made on it during my time there. You saw the need to complete it. I have to thank you. History would be fair to you and your administration.”

Obong Ekere, also a former Deputy Governor of Akwa Ibom State, appealed to the current NDDC administration to help in pushing for the construction of the Edemeya bridge.

He revealed that he worked hard to ensure that the bridge is constructed during his tenure as in the commission: “when I was MD, one of the projects I looked at was the bridge. The Edemeya bridge was awarded around 2007. When I came in, I saw the project had been abandoned, the contractor was nowhere to be found. On further discussion with the directorate in charge, we discovered that even the design that they were trying to use and was working on was faulty and wouldn’t deliver a good bridge to the community.

”Of course, we set a motion in process to first of all alter the design and get a new design. The next thing was that because of the amount that was needed to execute was beyond the approval limit of the board. We took it to the Bureau of Public Procurement to process. Before the approval came, we had already left office. Next thing is to present it to the Federal Executive Council.”

He appealed to the NDDC sole administrator to help push for the construction of the project: “the approval for the new design and Bureau of Public Public Procurement Scope and cost of the project is in your office, so if you help us process it, this community would be glad.”

Recalling that his administration constructed numerous access roads in Ikot Abasi as alternatives to the dilapidated bridge, also pleaded with the NDDC to ensure that provision for the establishment of primary school in Edemeya as listed in the commission’s budget before he left office was implemented.

The NDDC sole administrator, Akwa, assured that his administration will try its best in that regard.

Reacting on behalf of the family, Prof Aniekan Ekere, lauded the delegation for identifying with the family.

He said his late father was a man of courage who persevered and built a disciplined home despite losing his wife to death about 38 years ago.

Prof. Ekere prayed for long life for members of the delegation and everyone who has shown solidarity and goodwill to the family.

Another son of the deceased, Mr. Edo Ekere, was also present during the visit.