By MarkWitness (self media writer) | 27 days ago 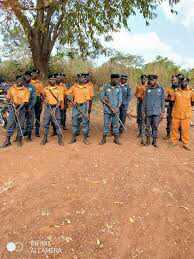 According to a statement disclosed by the Chief Press Secretary to the State Governor, Mr. Onogwu Mohammed, he said "the security operatives acting on Intelligence also apprehended an officer of the Nigerian Civil Defence Corps( NCDC), Inspector Abdullahi Saidu, who supplies the bandits with information, and weapons.

Quoting from Mr.Onogwu Mohammed own words:

"A group of armed bandits known to be terrorizing some parts of Koton Karfe Local Government Area of Kogi State, have suddenly met their waterloo.

"As officers of the State vigilante group killed 11 of them, arrested others, while three kidnapped victims were rescued.

"Other members of the group were crushed, especially, Madei who was killed in the kidnappers camp, while Umar escaped with a gunshot injury.

Five of the kidnappers, including the Civil Defence Operative have been detained in the custody of the Department of State Security for further investigation.