By Olawright (self media writer) | 10 months ago 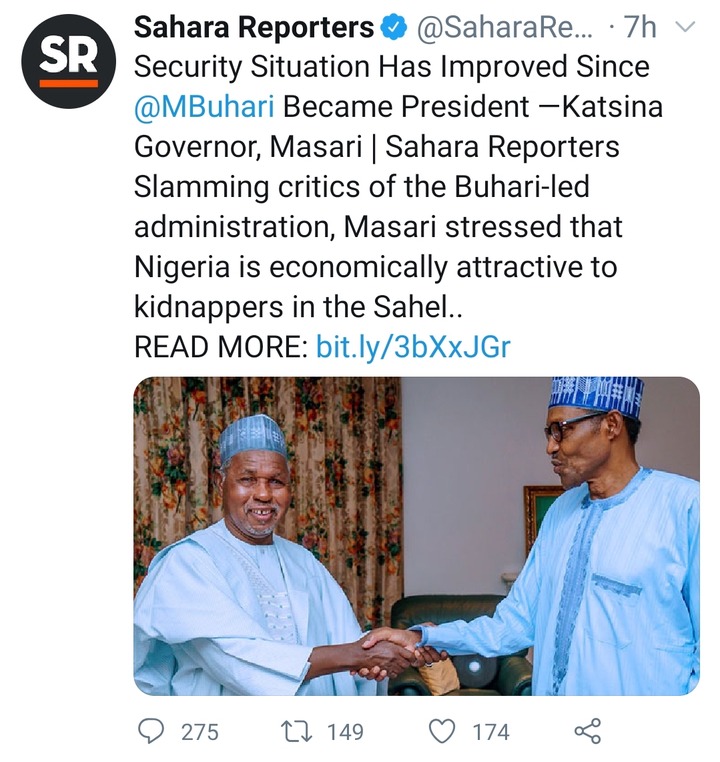 Slamming critics of the Buhari-led administration, the Chairman of the North-West Governors’ Forum stressed that Nigeria is economically attractive to kidnappers in the Sahel region of Africa.

Masari said, “Look at 2015 for instance, you could not go to the church, you cannot go to the mosque. If I travelled from Kaduna to Abuja, it would take five hours and three of those hours were for checkpoints.

There were at least 30 checkpoints along the highway.

“Is the situation the same today? It is not. Yes, there are kidnappers, there are bandits around but look at the whole world and look at the position of Nigeria in the Sahelian region. Are we not the richest? So, the attraction even for kidnappers to come to Nigeria is there. If you kidnap somebody in Mali, where are you going to get thousands? If I kidnap you in Nigeria, I get millions. So, all of us will have to rise to the occasion.

“When we started in 2015 in the North-West, it was cattle-rustling. Gradually, it now developed into banditry, rape, kidnappings. When all that the bandits can steal from the villagers along the fringes finished, they moved to the rustling of goats, sheep, and even chickens.

“In my state, the bandits kidnapped four relatives of very senior government officials. When they cannot get anything to sustain themselves, they resort to high-profile kidnappings for money in cities and towns. That is something we must work hard to stop.” 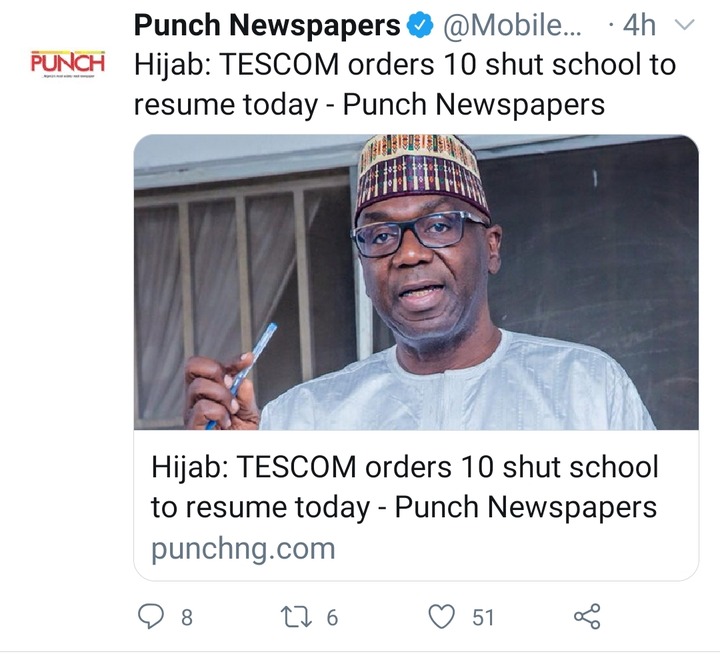 THE Executive Chairman of the Kwara State Teaching Service Commission, Mallam Bello Abubakar, has summoned the Principals, Teachers and Staff of all 10 schools shut down by the state government on the Hijab matter to report at their respective schools today (Friday).

Abubakar, in a statement signed by the Press Secretary, TESCOM, Peter Amogbonjaye, explained that the teachers’ resumption became necessary in order to prepare the final year students for their external examinations.

Bello said any staff that failed to report to their duty posts would face the full wrath of the law as government would not condone any act of insubordination.

He also warned all stakeholders against taken law into their hands, stressing that peace meeting would continue between the government and the stakeholders.

The chairman said government regretted the inconveniences the shutdown might have caused the students, saying that the action was taken in the interest of peace.

He also appealed to parents and the members of the public to remain calm as the government was on top of the situation since its meeting with stakeholders was still ongoing. An officer died of gunshot injuries on Thursday, following an attack on a police patrol team along the Nimo-Neni link road in Anaocha LGA of Anambra state.

The police command in Anambra confirmed the incident, adding that another officer also sustained gunshot injuries.

Toochukwu Ikenga, a deputy superintendent of police and the command’s public relations officer, said there were at least 20 gunmen conveyed in three Toyota Sienna buses and motorcycles, who engaged the policemen in a gun duel.

According to NAN, the gun battle lasted about 30 minutes before the attackers were forced to flee the scene.

“There was an attack on a police patrol team at Okacha junction, Neni in Anaocha, by yet-to-be-identified gunmen on March 18 at about 4:30pm,” Ikenga said.

“The hoodlums, numbering over 20, engaged the policemen in a gun duel for over 30 minutes before reinforcement from the state headquarters arrived, forcing the hoodlums to escape.

“As a result, two police operatives sustained gunshot injuries and were rushed to the hospital for medical attention, where one was confirmed dead by a medical doctor.”

The spokesman added that Monday Kuryas, he commissioner of police, visited the scene of the incident and ordered an investigation into the attack.

He maintained that those behind the attack would be brought to justice. 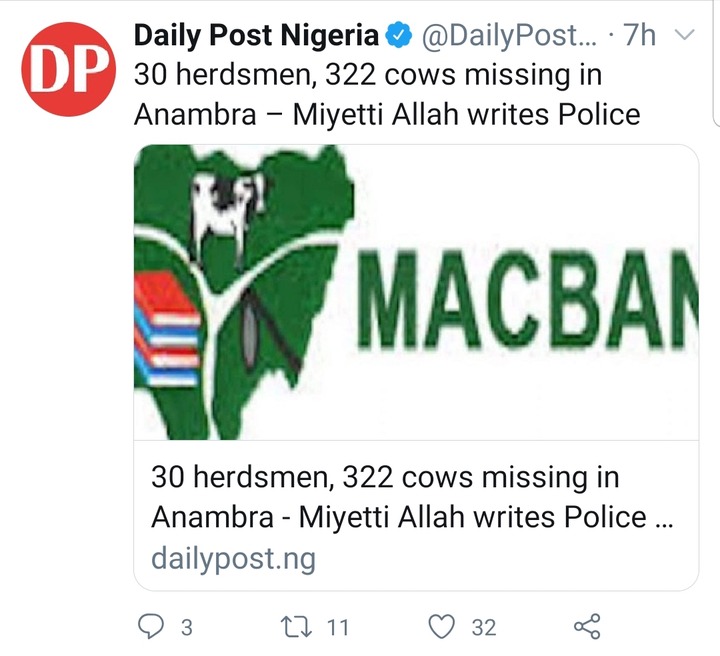 The Miyetti Allah Cattle Breeders Association of Nigeria (MACBAN) has written to the Police over attacks on Fulanis in Anambra State.

The letter signed by the Zonal Chairman, Gidado Siddiki, said the attacks resulted in casualties.

The formal complaint stated that 30 Fulani herders and 322 cows are missing.

“The lives of members of MACBAN are in danger in parts of these concerned communities.

“We therefore ask for your urgent interventions to forestall further loss of lives and properties,” it read.

One dies, 60 infected as another ailment hits Kano 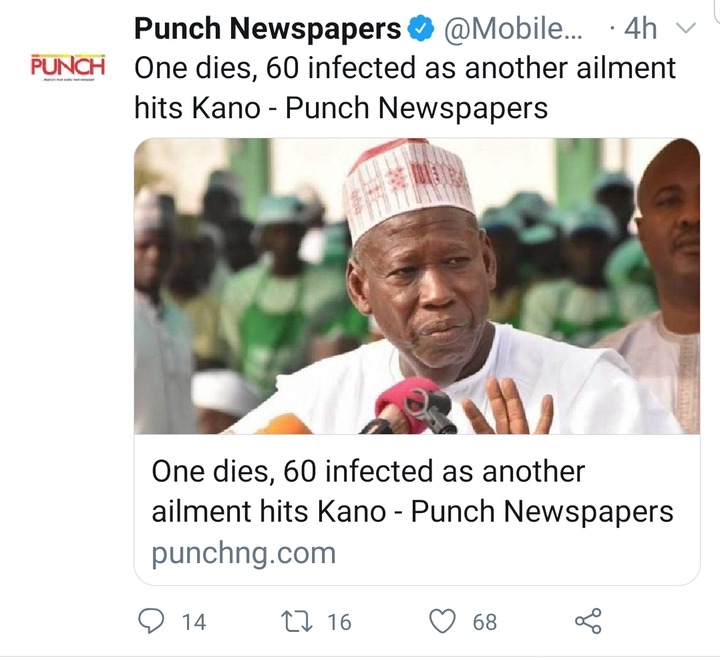 A mysterious ailment has hit residents of Gwangwan village in the Rogo Local Government Area of Kano State as victims vomit and urinate blood.

Gwangwan village is about 136 kilometres from Kano City.

A source, who spoke under condition of anonymity, said six places within the village were affected as no fewer than 60 persons have so far contracted the disease since the outbreak.

According to him, no fewer than 35 people were taken to Rogo General Hospital within a day of the outbreak.

“As I am talking to you now, no fewer than 35 persons were hospitalised at the Rogo General Hospital within one day of the outbreak. So far, only one person died as a result of the outbreak,” the source added.

According to him, some of the affected persons could not even stand on their feet as a result of the severity of the disease.

Officials of the Rogo Hospital, who spoke on condition of anonymity, said they were not aware of any disease outbreak.

Similarly, officials at the Ministry of Health said the ministry received a report of the outbreak but only four persons contracted the disease and have since been treated and discharged from the health facility in Rogo. 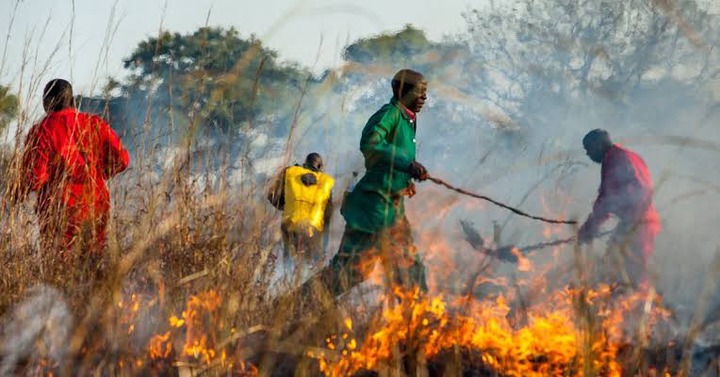 Do you think Kwara Christian schools should accept the use of Hijab?

Drop your comments in the box below.

Content created and supplied by: Olawright (via Opera News )