By Watertown (self media writer) | 6 months ago 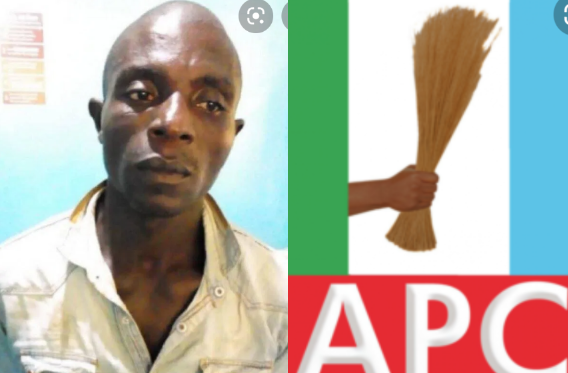 Man Beats His Wife To Death Over ₦2000 Loan

One Mr Christopher has been arrested in Edo State by men of the Nigeria Police over the alleged killing of his wife. 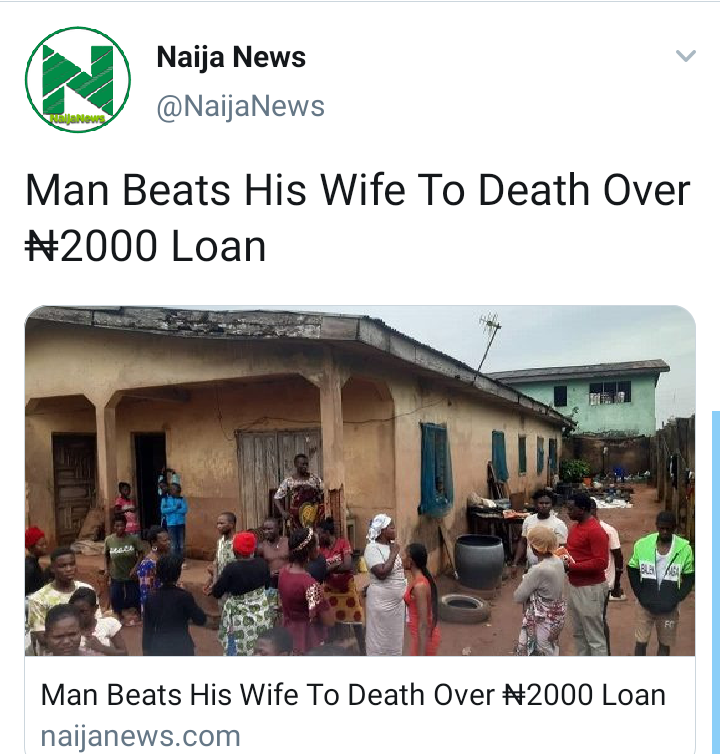 Reports gathered that the 45-year-old man pounced on his wife, Mrs Isoken Christopher after she refused him a loan of ₦2000.

The Nation reported that the eldest’s son of the suspect, Augustine described his father as a chain smoker and drunkard. Christopher reportedly beat to death his wife who is said to be a businesswoman to death at their home located at No. 1, Agbontaen Street beside Ebvareke Secondary School, off Agboniro Street, Uselu, Benin, the Edo State capital on Saturday night, June 26.

Speaking on the incident, Augustine (the suspect’s eldest child) who is just thirteen years of age, said his father who works for a waste disposal company in Benin city, has over the years formed the habit of physically assaulting their mother, a fashion items dealer, at the slightest provocation.

According to Augustine, his father called their mother on phone to demand N2,000 loans and started beating the deceased as he returned home around 9 pm when the money was not quickly given to him.

APC Announced Date To Begin Sale Of Forms For Congresses

The All Progressives Congress (APC) has announced plans to commence sale of forms for its congresses. 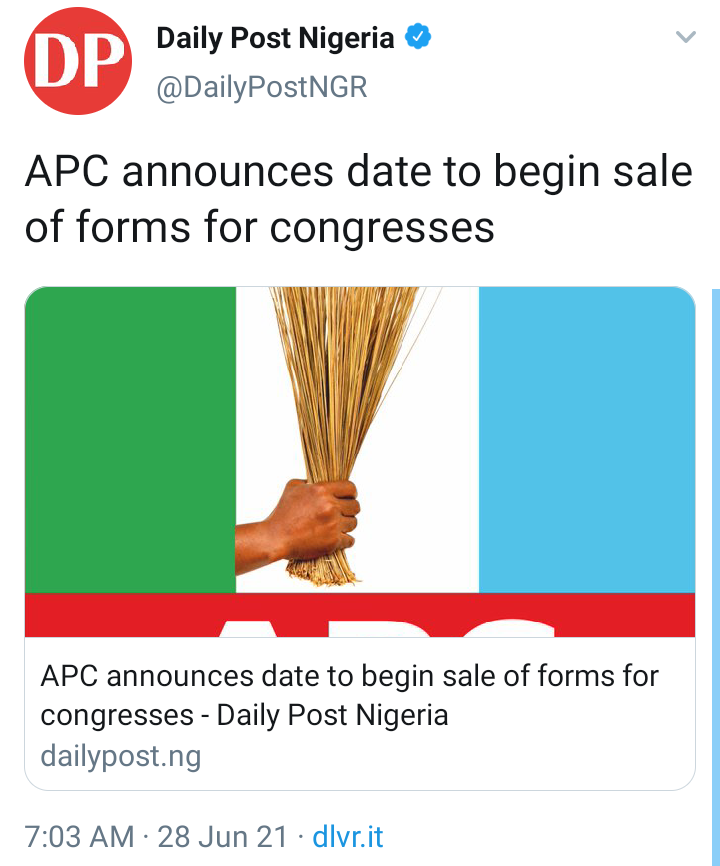 This was disclosed by Prof. Al-Mustapha Medaner, APC Director of Organisation, on Sunday.

In a statement he issued, Medaner said the decision was in line with the approval of the Governor Mai Mala Buni-led APC Caretaker and Extraordinary Convention Planning Committee (CECPC) of the party.

Medaner said the purchase of forms for ward congresses would take place from July 1 to July 7, while the inauguration of wards and local government congresses, screening and screening appeals committee would hold on July 10.

Fuel: Subsidy Must Go To Move Economy Ahead Says FG

The Federal Government yesterday restated the need to deregulate the downstream sector of the oil and gas industry through a market-driven pricing of products to boost the nation’s economy. 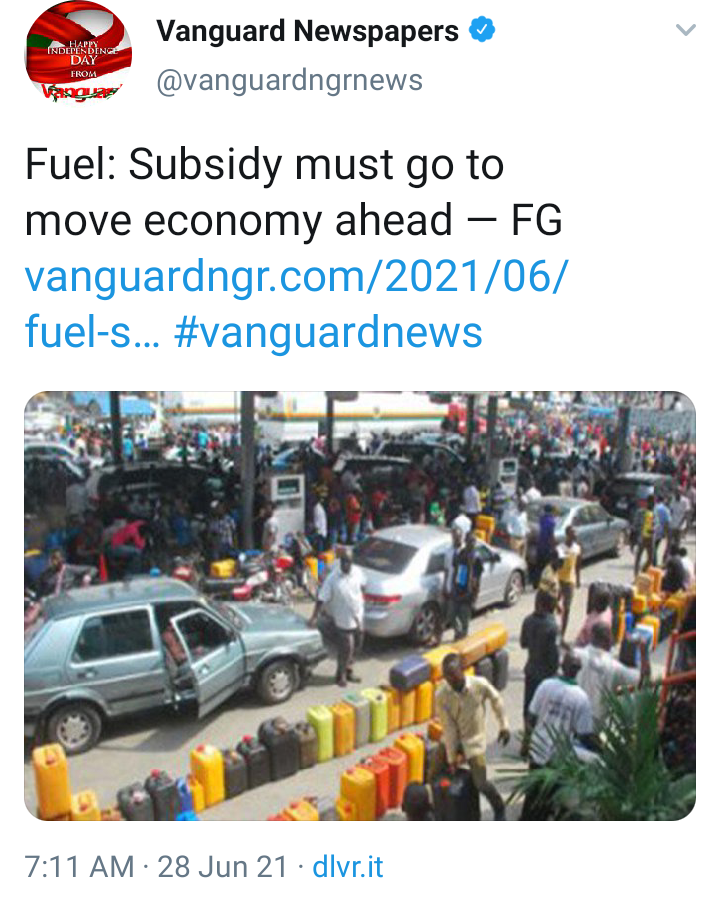 Minister of State for Petroleum Resources, Mr. Timipre Sylva, who stated this at the News Agency of Nigeria, NAN, Forum in Abuja, also said the country “accidentally” discovered 206 trillion cubic feet of gas reserves while in search of crude oil. 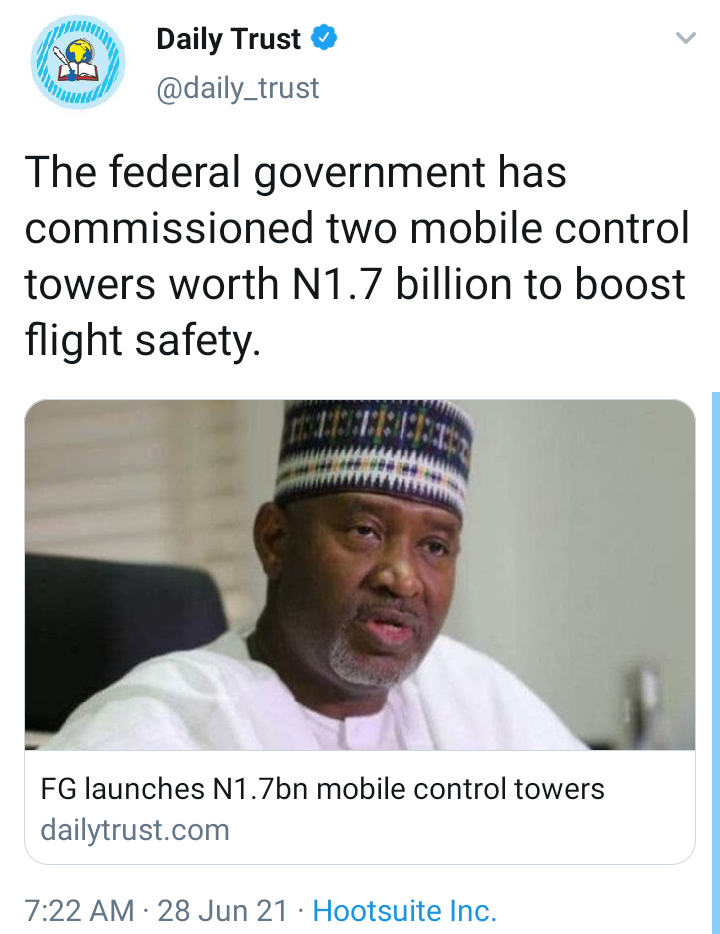 Minister of Aviation Senator Hadi Sirika, speaking at the commissioning in Lagos, said the towers procured by the Nigerian Airspace Management Agency (NAMA) could be deployed for emergency services.

“The amount of N1.7bn has been spent in procuring these mobile towers. We will use them in Lagos and Abuja and if need be we take them to locations that do not have conventional control towers. They are so equipped, so modernised, so efficient and so very alive. They have everything a control tower should have.

“We have real-time weather, we have all of the approach and departure procedures and over-flight to ensure smooth flight operations and air traffic management.”

THE Atiku Support Organisation, has called on the Peoples Democratic Party, to adopt former Vice-President, Atiku Abubakar, as its consensus candidate for the 2023 presidential election. 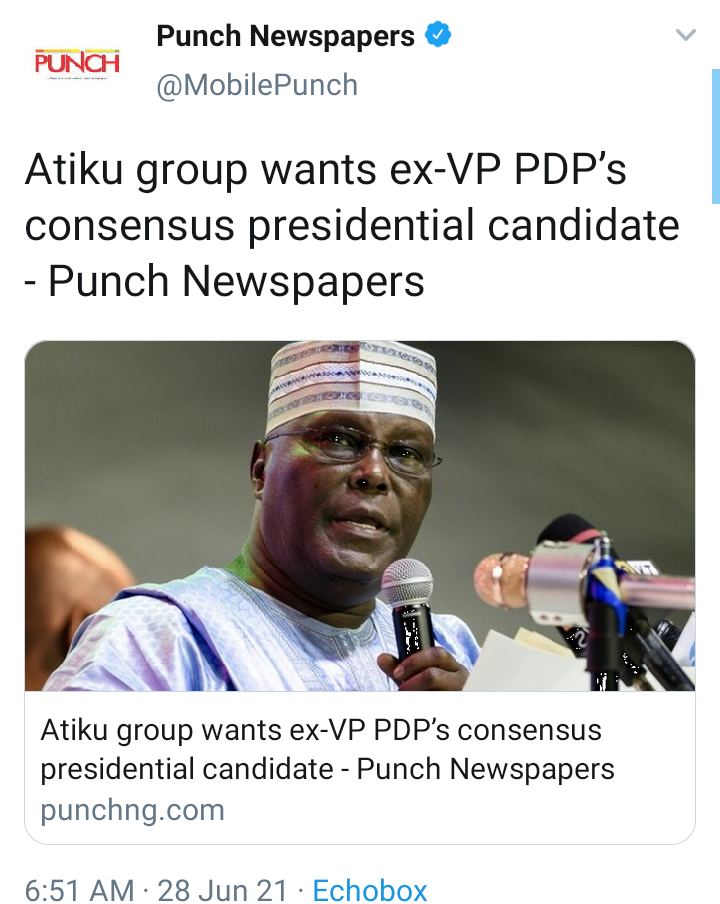 The group made the call at the inauguration of its state executives in the South-South geopolitical zone, according to a statement issued by the National Director Publicity, El Mo Victor.

The statement titled, ‘Adopt Atiku Abubakar as the Consensus Candidate for 2023 Presidential Poll, Atiku Support Organisation Tells PDP,’ was sent to The PUNCH, in Abuja, on Sunday.

The statement read in part, “The Atiku Support Organisation, on Friday, June 25th, 2021, held its South-South zonal inauguration of state executives from the six states in the geopolitical zone