Top 2 notorious armed robbers in the history of Nigeria

By Denza (self media writer) | 8 months ago

I provided a link to the YouTube video in the end of this article.

1) LAWRENCE NOMANYAGBON ANINI (A.K.A. THE LAW) 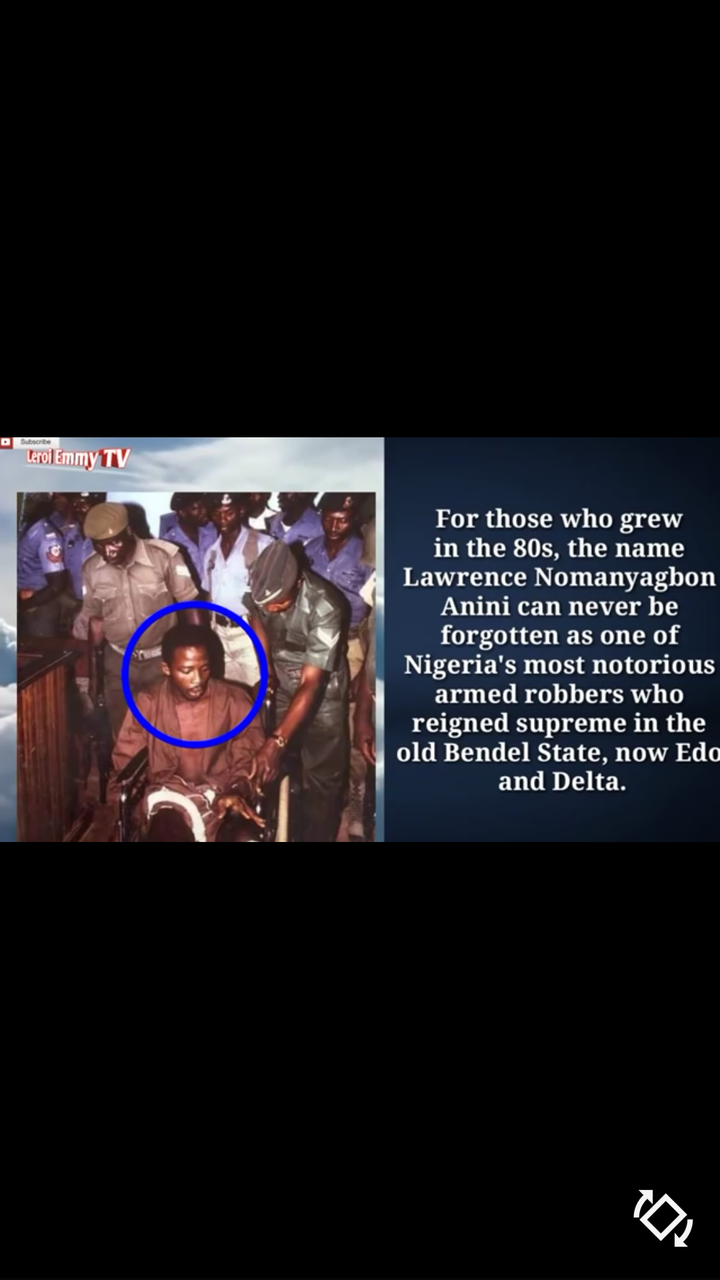 For those who grew in the 80s, the name Lawrence Nomanyagbon Anini can never be forgotten as one of Nigeria's most notorious armed robber. Who reigned supreme in the old Bender state, now Edo and Delta.

In 1983 Anini and his gang members successfully robbed 12 banks in one day and killed 18 people in the process.

Lawrence Anini and his gang of robbers made it a point of duty to rob banks in a broad day light.

Their level of confidence was so high that they went about throwing money at market women in other to gain popularity.

Anini was nabbed on the 3rd of December 1986 in Benin city. Anini who was confined to a wheelchair throughout his trial following the amputation of one of his legs and was sentenced to death by justice James Omo-agege of the Benin high court and was executed on 29/03/1987. Naturally, Doctor Ishola Oyenusi should have taken the top spot on this list going by the fact that he was the first known armed robber in Nigeria. But Anini exploit later outshine his.

He took the Nation by storm shortly after civil war ended in 1970.

And before he was executed in 1971 at the famous Bar Beach show in front of 30,000 watching Nigerians, no one believed that the Doctor could be captured as he was rumoured to be invisible.

When Oyenusi reigned at the hight of his exploit, he declared and I quote: "The bullet has no power over me".

Oyenusi got into active robbery back in 1959, but he committed his first major robbery when he snatched a car along Herbert Macauly road in yaba, lagos and killing its owner in the process; just because his girlfriend was broke and needed money to by her make up.

By the end of the civil war, Oyenusi had metamorphosed into a cold hearted robber who took delight in causing pain to his victims.

The last robbery that ended his journey was in ikeja lagos, in march 1971.

Doctor Ishola Oyenusi execution was celebrated by relieved Nigerians who trooped out en-masse to the Bar Beach in lagos to witness the end of a man who had held the country to ransom.

While being tied on the drum for execution, he kept smiling, in fact he smiled to his death.

Content created and supplied by: Denza (via Opera News )