"We shot her dead, poured acid on her after we forcefully slept with her" Suspect 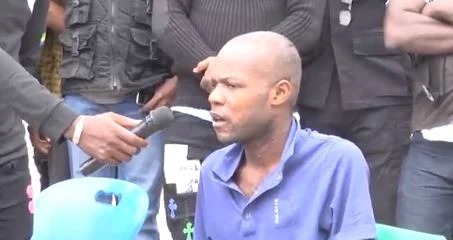 According to a news that was posted by Punch Newspaper this evening, it has been alleged that men of the Rivers State Police Command have successfully arrested a man, whose name was given as Prince Reuben, because himself and his friends forcefully slept with a woman and killed her thereafter.

According to the information that was given concerning the ugly incident, it was made known that Prince Reuben, earlier sold a plot of land to the woman, Mrs Joy Saturday, a hardworking mother with four children for the sum of N250,000 for a plot of land. After some days, Reuben lured the victim by pretending that there is another vacant land for sale, as he claimed that it is better than the former one she bought and due to that, Joy Saturday followed Reuben to the location with the motive of inspecting the said land.

Unknown to her that Reuben, already conspired with his three friends, Nwaba, Promise and Chinedu, on how they will kidnap her and make money out of her.

During the inspection tour, the deceased was abducted by the four suspects, as they forcefully slept with her, stole the sum of N20, 000 she was having on her, shot her dead and thereafter poured acid on her body.

It was made known that the other three suspects are now at large, as Frank Mba appealed to Nigerians who have information about the whereabouts of the suspects to reveal it to police operatives.

OPINION: Bola Tinubu can work with these four senators in the 2023 presidential election

Opinion: Pastors and Female politicians who may run for president in 2023