Man Escapes Death after his Phone Case Blocked a Bullet Fired at him (Photos).

A man reportedly escaped death after his incredible Hulk mobile phone case blocked a bullet which was shot at him. 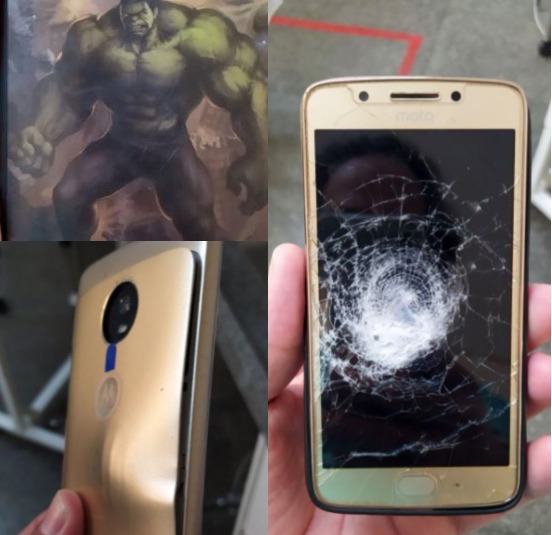 The unnamed victim was shot on October, 7 and was rushed to the University Hospital in the city of Petrolina in the Brazilian state of Pernambuco.

Police responded immediately to the scene but the suspects reportedly fled before they arrived, and the victim was taken to hospital by paramedics.

Doctors at first feared the worse for the victim, until they realized that the bullet did not penetrate his body.

It was gathered that the bullet had only grazed the victim's hip before being blocked by his phone case.

It was reported that the man was shot during an attempted robbery in a rural community of the municipality of Petrolina.

The suspects are yet to have been identified and it is not yet clear as to whether the police officers will continue to investigate the case going forward.

While we thank God for the life of the man, we also employ the police officers to go on with the investigation and apprehend those suspects so as to avoid such incident from reoccurring.

The victim on the other hand, should be very grateful to God almighty for saving his life through his incredible Hulk mobile phone case.