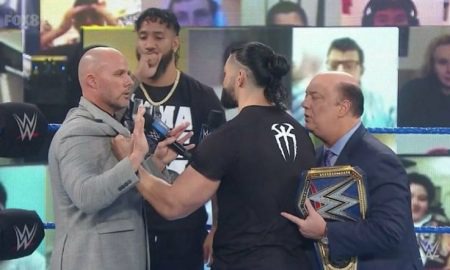 WWE Hall of Famer The Iron Sheik has just told Adam Pearce that if he fails to defeat Roman Reigns for the Universal Title, he will beat him up.

On tonight’s edition of WWE SmackDown, the unthinkable happened when Adam Pearce won the opportunity to face Roman Reigns for the Universal Title at the 2021 Royal Rumble event. Shinsuke Nakamura delivered one of his career’s greatest performances in a number one contender’s gauntlet match.

But Roman Reigns and Jey Uso made sure that Adam Pearce would come out victorious in the end.

Following Pearce’s victory, The Iron Sheik posted a tweet addressing him. Sheik mentioned how Pearce has always shown respect towards him as well as the business. He then told Pearce to win the Universal Title and be ready for a beatdown if he fails to do so. Check out the tweet HERE.

Adam Pearce is a pro-wrestling veteran and a five-time NWA World Champion. It goes without saying that he knows what it means to hold the top title of a company. However, the path ahead of him isn’t an easy one in the least.

Roman Reigns is one of the most ruthless entities in all of WWE today. He never shies away from doing everything in his power to make sure that the Universal Title stays on his shoulder.

Check out Adam Pearce’s comments on how he got a job in WWE:

“I got a phone call that said, ‘Hey, a guy is going to call you and offer you a tryout. We are not interested in you as a talent. Know that up front, but accept the tryout,’ which I thought was a very auspicious phone call to get that you want me to try out but not as a talent.”

Pearce and Roman Reigns will lock horns at the 2021 Royal Rumble event. It’s almost a guarantee that being away from the ring for more than six years will prove to be a major disadvantage for Pearce at the event

Content created and supplied by: X-NEWS (via Opera News )