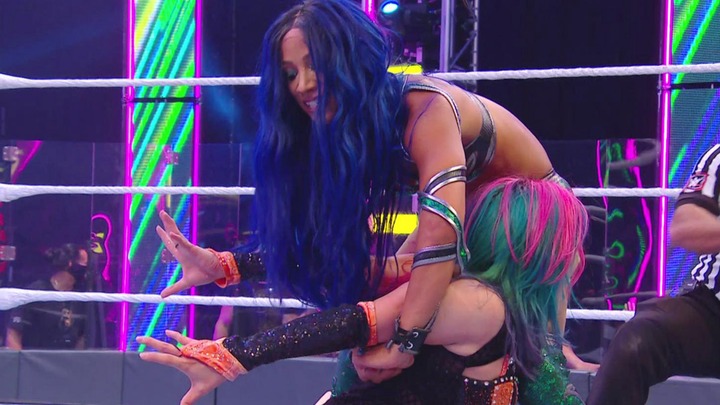 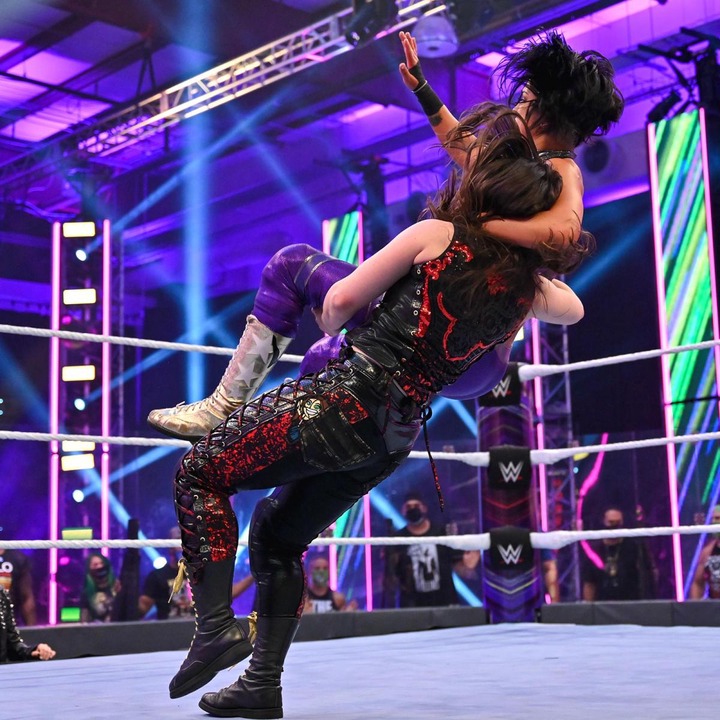 In a literal sense, Sasha Banks left The Horror Show at WWE Extreme Rules with the Raw Women’s Championship, but not without controversy.

The Legit Boss was extra vicious from the start, deploying a short finger lock and using other varieties of precise limb manipulation to stifle Asuka. A back-and-forth battle on the apron proved especially dire for Asuka, who was slammed back-first into the ringside plexiglass. Banks’ ensuing frogsplash only netted a two-count, however.

Banks’ trademark trash talk proved costly though, and she ate brutal strikes from The Empress of Tomorrow before being folded up with several German suplexes.

Meanwhile, Kairi Sane felt the wrath of Bayley on the outside, getting dropped with a Bayley-to-Belly. Bayley’s distraction of the referee caused him to miss Banks tapping to the Asuka Lock, and the official was blinded by Asuka’s green mist intended for Banks moments later.

With the referee incapacitated, Bayley struck Asuka with one of the Women’s Tag Team Titles and put on the referee’s shirt to count a pinfall for Banks, unofficially hailing her partner as the victor and fleeing with the Raw Women’s Championship. 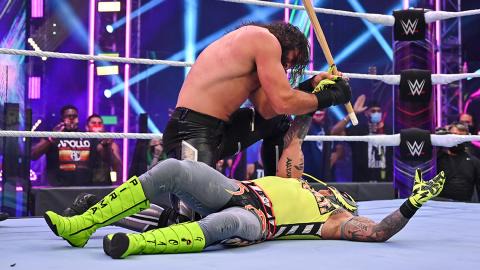 Not even Seth Rollins was prepared for the sight of what he had promised to do to Rey Mysterio.

Coming armed with plyers, The Monday Night Messiah was hell-bent on victory in the first-ever Eye for an Eye Match. The fight quickly got nasty, as Rollins used the foot of a steel chair and a pen from the announce desk, among other objects.

Mysterio quickened the pace to overwhelm Rollins, jumpstarting a rally with a top-rope seated senton, softening him up for an unsuccessful attempt to extract Rollins’ eye.

Mysterio kept Raw’s Black Hand on his heels with his superior quickness, again targeting his eye with a splintered Kendo stick. After using Rollins’ own Stomp against him on the ringside floor, Mysterio tried to grind his eye into the steps like Rollins had done to him months ago, but Rollins delivered a desperation low blow to escape.

Rollins followed with his Stomp, leaving Mysterio defenseless for his eye to once again be ground into the steps — this time to the point of extraction. The Monday Night Messiah was immediately sickened by his handiwork, while Mysterio received medical attention after one of the most gruesome conclusions in WWE history. 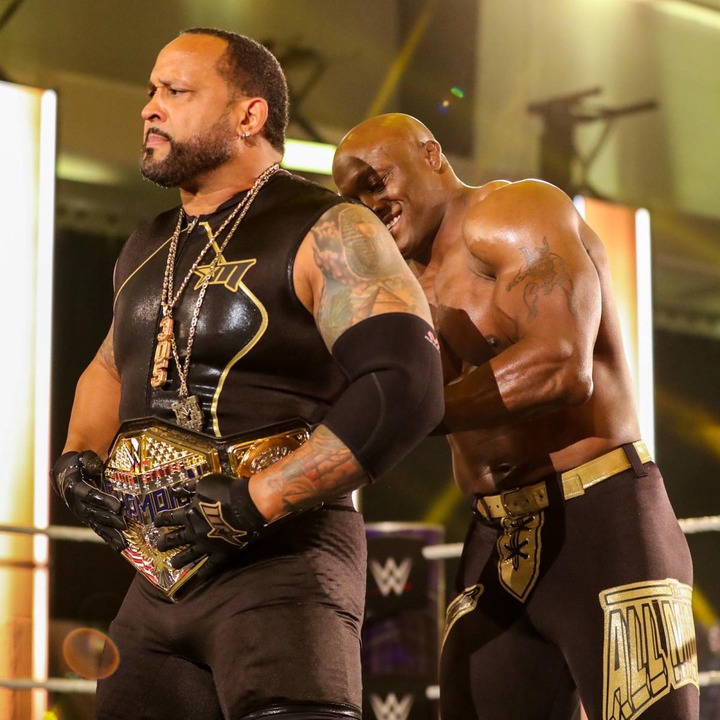 MVP is the new United States Champion — at least, according to himself.

He declared himself as such at The Horror Show at WWE Extreme Rules when Apollo Crews wasn't cleared to compete in their scheduled match due to a bulging disc. 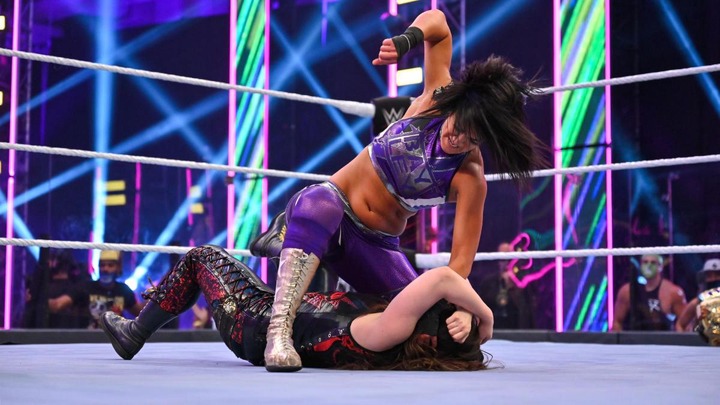 Bravado nearly cost Bayley early, as Cross scored a near-fall after a swinging neckbreaker. Cross continued the frenetic pace, putting her foot on the gas with a tornado DDT on the outside and a pair of top-rope crossbodies.

Bayley eventually slowed the pace with her veteran savvy, though she nearly knocked herself out when she missed an attack in the corner and collided head-first with the second turnbuckle.

Sasha Banks, who was at ringside, proved to be the difference-maker, however. Using Sasha’s “Boss” ring, Bayley leveled Cross in the mid-section before finishing her off with a swinging facebuster to retain the title. 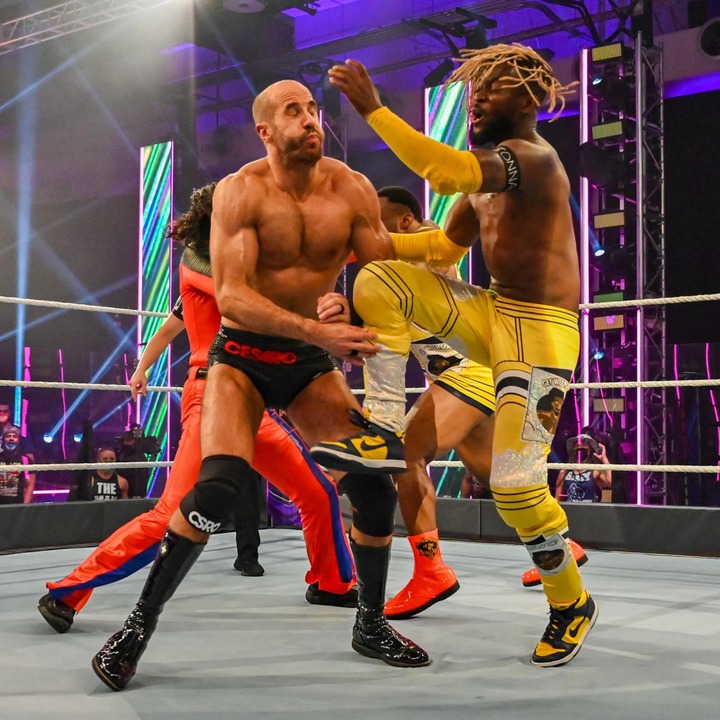 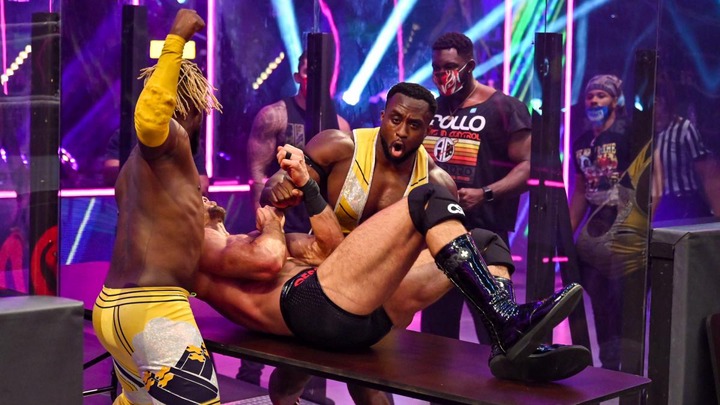 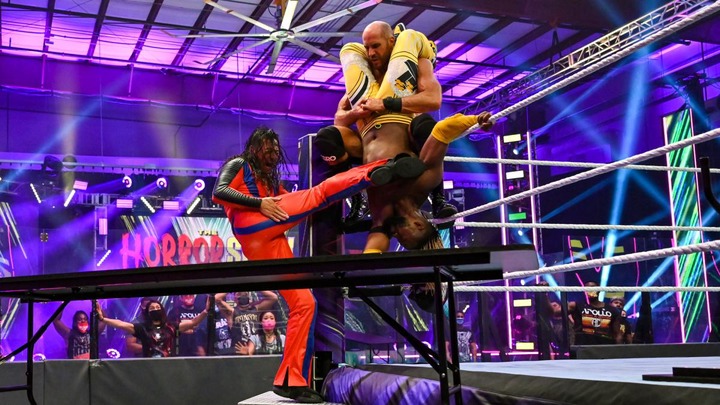 The New Day are no longer SmackDown Tag Team Champions thanks to some clever tables teamwork by Cesaro & Shinsuke Nakamura.

The new champions isolated their opponents repeatedly, first focusing on Kofi Kingston after taking out Big E early. But the powerhouse of The New Day recovered quicker than Cesaro & Nakamura likely anticipated and nearly split Cesaro in half with a spear off the apron to the outside mat. Moments later, Big E launched Kofi over the top rope, only to be met face-first with a table held up by Cesaro & Nakamura.

The New Day recovered to stack two tables, but it later proved to be a strategic miscalculation, as Nakamura helped Cesaro hoist Kofi into the air and send him crashing through the tables with a colossal powerbomb to dethrone the champions. 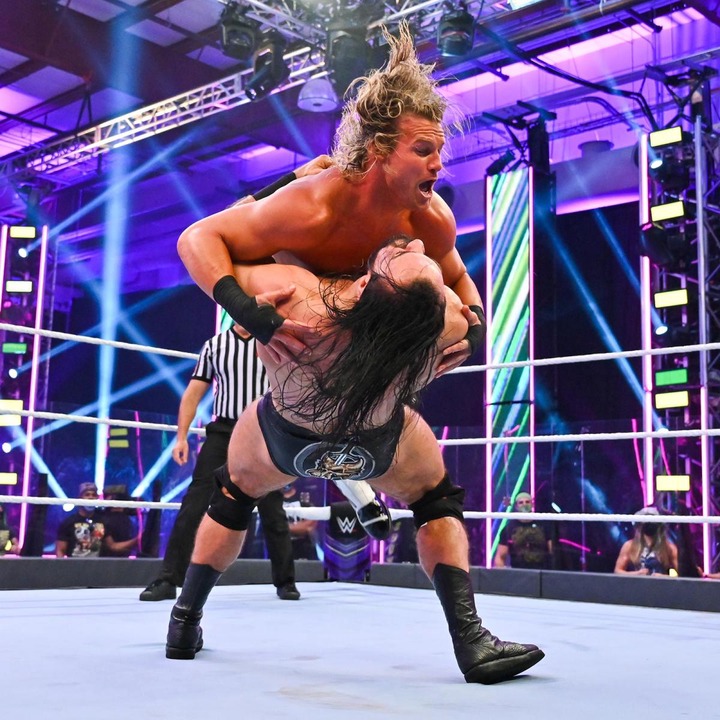 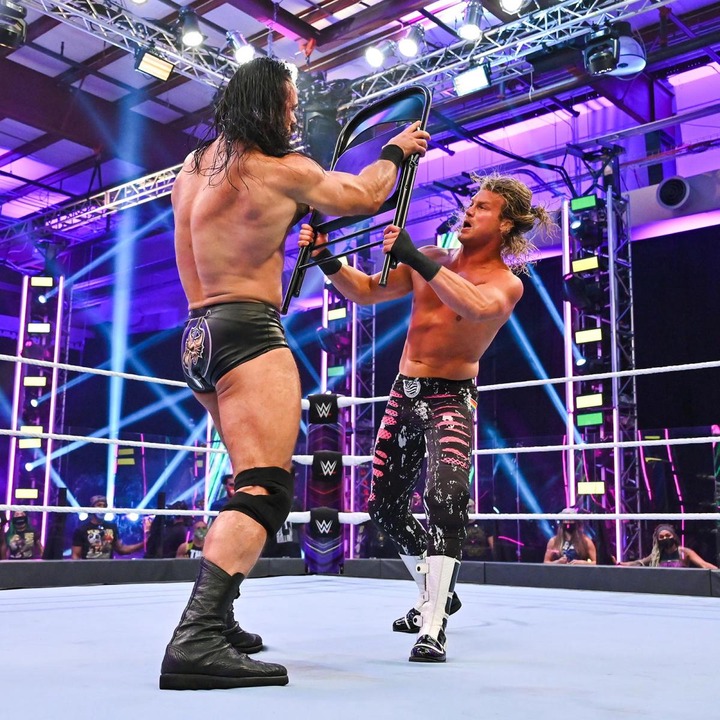 The deck was stacked against Drew McIntyre in his WWE Title defense against Dolph Ziggler. But even in a match where Extreme Rules applied only for Ziggler — and one where Ziggler could also become the new WWE Champion by pinfall, submission, disqualification or count-out — McIntyre still found a way to prevail.

McIntyre quickly grew frustrated, understandably, as he was handcuffed by the unique but clever rules selected by his former tag team partner. Instead, The King of Claymore Country had to get creative to ratchet up the brutality without risking disqualification — resorting to things like slingshotting Ziggler face-first into the ringside plexiglass.

Ziggler did all he could to exploit his chosen stipulation, blasting McIntyre in the leg before he could attempt a Claymore, then following with a Zig Zag for a near-fall. Moments later, The Showoff ascended to the top rope, leaping to drive McIntyre through a table below on the outside.

As frustrated as McIntyre was, Ziggler was driven mad by his inability to put away McIntyre. McIntyre caught Ziggler spending too long prepping for a potential superkick, blasting him with a massive Claymore for the victory. Kevin Owens put another notch in his belt in his continued war against The Monday Night Messiah and his follower, earning a hard-fought win over Murphy on The Horror Show at WWE Extreme Rules Kickoff.

Both competitors set a physical tone from the get-go with blistering strikes. KO took control when he blocked multiple superplex attempts before dropping Murphy face-first on the mat and hitting a spectacular step-up, springboard moonsault.

Moments later, Owens caught Murphy with a superkick and a Stunner to pick up the victory. 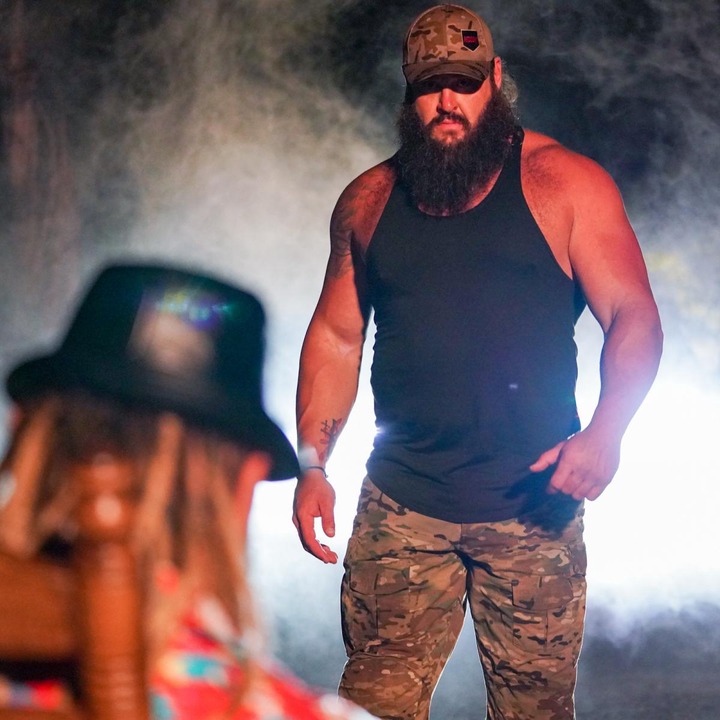 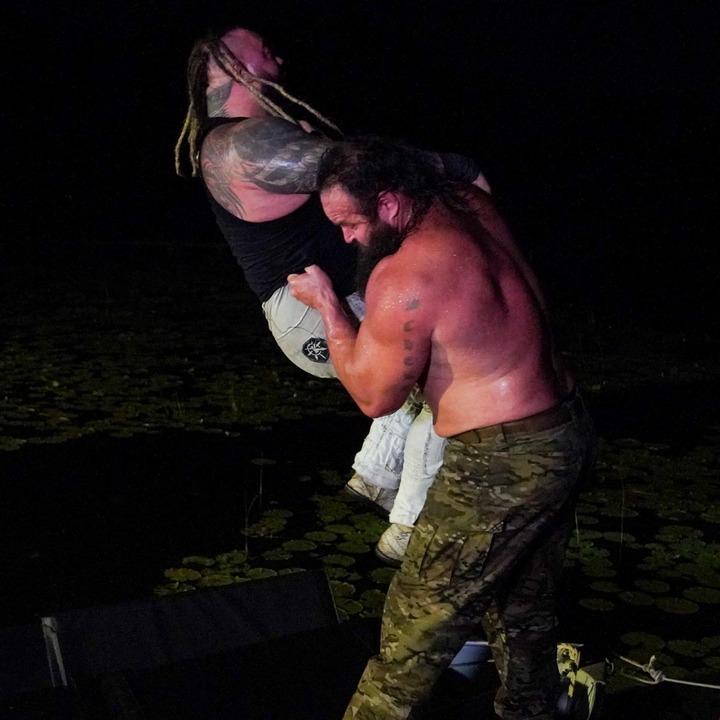 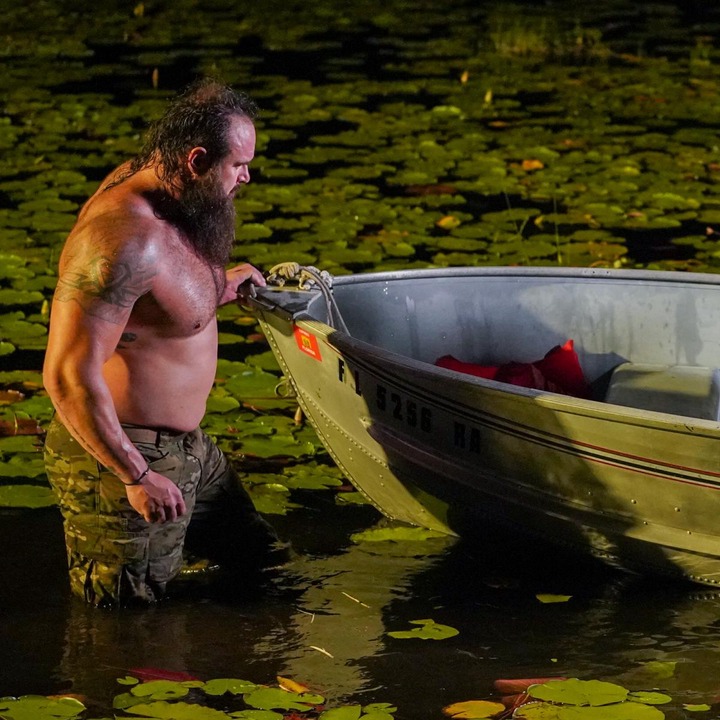 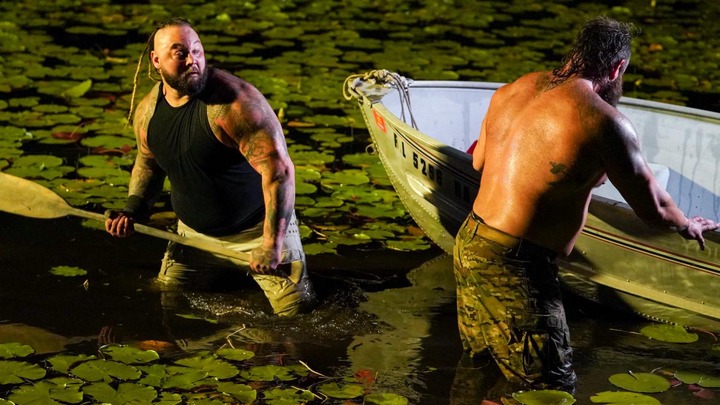 Braun Strowman took Bray Wyatt’s bait, and he may never be the same after the first-ever Swamp Fight.

As expected, Strowman and Wyatt’s return to the swamp was chockful of psychological warfare, and the Universal Champion quickly became enraged with his former leader’s mind games.

But he was also quickly disarmed after appearing to see a vision of himself as the former Black Sheep of The Wyatt Family, later finding himself chained to a rocking chair while the familiar Wyatt Family tune played.

The fight only got weirder from there. The Monster Among Men saw a vision of Alexa Bliss, his former Mixed Match Challenge Partner, seemingly beckoning Strowman toward her.

He next found a small, captain-less boat, but he was suddenly blindsided by Wyatt, who submerged him in the swamp. Wyatt battered him repeatedly with a club until Strowman finally fought him off, seemingly for good.

That was until Wyatt reemerged from the depths of the swamp, attacking Strowman with the Mandible Claw and pulling him underneath the water with him. Moments later, only “The Fiend” Bray Wyatt resurfaced, with no sign of Strowman.