By Ifydaddy (self media writer) | 2 years ago

The Premier League is one of the most competitive Football League in the world and consist of many Professional Footballers With different qualities. 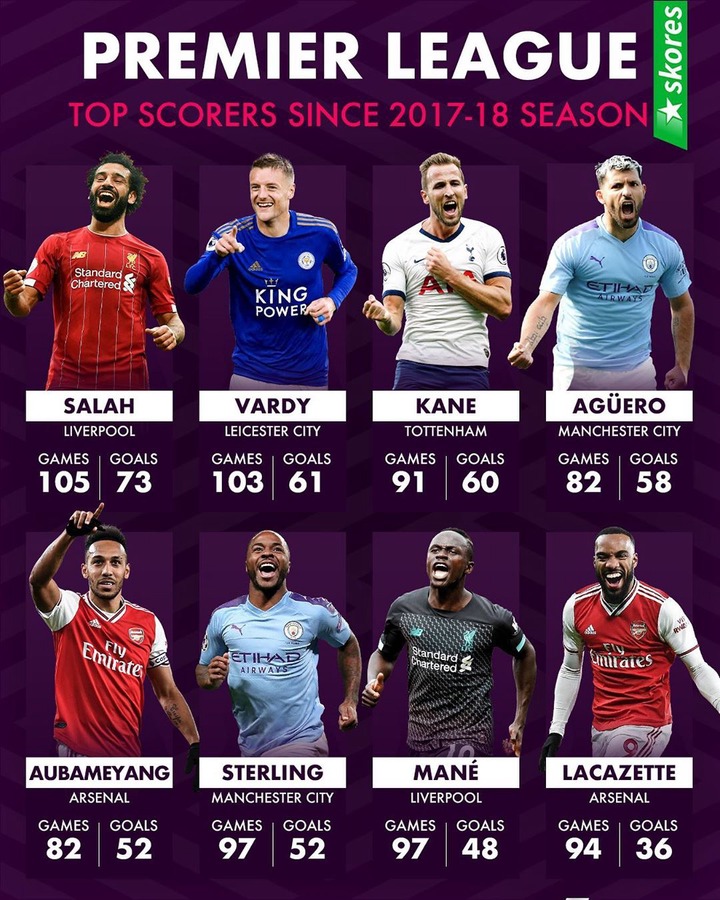 The Egyptian magician has been in fine form since 2017/18 season, helping his club Liverpool reach the Uefa champions league final and then lifting the trophy the following year and winning the Premier League. He also won the African best Footballer of the year award.

The English hitman was instrumental in the sensational season Leicester City had that led them lift the Premier League trophy.

Vardy has scored average of 20 goals every season for the past 3 seasons despite his club not at their best. He has scored 61 goals in his last 106 games.

The English Striker has been consistent for his London Club and his goal scoring ability helped them reach the Uefa Champions League final although They lost to Liverpool.

Despite series of injuries which caused a set back for him, the striker has managed to score 60 goals in his last 91 games.

The Argentine goal machine has been one the most consistent goal scorer in the Premier League.His presence in City’s front line is always a threat to the opposition team and he helped his club lift the Premier League back to back. He has scored 58 goals in his last 82 games.

The Gunners hit man has been sensational since joining the London club from Dortmund.

Despite his team not not been at therebest ,he has been on target for seasons scoring a. Average of 20 goals every season and in his last 82 games he scored 52 goals.

The English striker has also been infine form in recent seasons,helping his team win the Premier League back to back.

The Senegalese Stiker has been very consistent for his club in recent seasons his creative skill and direct runs has provide enough goals and assists for his club,helping them reach Uefa Champions League final and coming back to lift it the next year and winning the Premier League title.

The Frenchman have been improving his team with his ability and skill since he joined from Lyon, He has been in good form in recent years and has scored 36 goals in 94 games.

This is the list of Premier League top scorers since 2017/18 season.