Football and injuries are one inseparable friend; the game is an exciting team sport, yet gruesome. While the fans are focused on seeing their team win, they might not realize just how toiling each play can be and who’s going to be laid off.

Due to the strenuous nature of the game which requires running, kicking, and controlling the movement of the ball with legs, it would be very hard for players not to pick up an injury.

The worst moments of every professional footballer are when they pick up a minor or a career-threatening injury that rules them out for a long period of time, while the healing process could take up to a year or two depending on how severe the injury is.

Injuries in football are often caused by collision with an opponent, overuse of a muscle, or landing awkwardly while contesting for a ball on the air which is the cause why players stay out of action for a longer period of time.

Treating a torn cruciate ligament using the Sambba technique, carried out under arthroscopy, reconstructing the torn ligament with a transplant taken from the knee, Monitoring the residue of the anterior cruciate ligament. (Photo by: BSIP/Universal Images Group via Getty Images)

When it comes to the most common and damaging injuries in football, the anterior cruciate ligament obviously comes first. This injury is no doubt what every professional footballer wants to avoid but unfortunately, football is a contact sport as such its unavoidable.

ACL is a kind of injury that damages the knee of a player, and according to research ACL can be very hard to recover from because it often involves multiple residual deficits such as quadriceps muscle atrophy, and changes in movement patterns due to how severe the injury is.

When a player sustains or picks up an Anterior Cruciate Ligament injury, the healing process takes up to 18 months to 2 years for the graft to fully integrate into the body.

Football’s strenuous and fast-paced nature makes ankle sprains one of the most common injuries pick up by professional footballers.

This occurs when there is a tear to the ligaments that surround and connect the bones of the leg to the foot, this happened when the muscle is overstretched

Another dangerous way to pick up strains’ ankle is through a horrendous tackle from an opponent, while other causes include jumping, running, or falling from a very high level.

Ankle sprains are very common injuries in football and if picked up there’s a need for proper treatment and rehabilitation in order to avoid long-term pain and relapse of the injury that could lead to chronic arthritis.

When a player sustains ankle sprains, it often requires the use of crushes for a period of time in order for the ankle to heal properly and faster with the help of a sound physiotherapist.

A hamstring injury occurs when one or more of three muscles located at the back of the thigh and runs directly to the knee region are stretched beyond limits to the point of snapping or causing a tear to the tendons.

The severity of hamstring injury comes with different degrees of pain, the first-degree sprains only affect a few parts of the muscle fiber.

As common as hamstring injury is in football, it’s one of the game injuries that is very easy to sustain, on the other hand, the perfect way to try and avoid it is through proper warm-up and cooling.

An Achilles tendon rupture is a tear to the muscle tendon and it occurs when the muscle is overstretched beyond its capacity. The injury can be attributed to forceful movement or sudden accelerations of a player which eventually leads to injury.

A football player usually sustains Achilles tendon rupture through bad tackles, falling, or tripping and the procedure to treating it depends on the severity of the injury which could either require quick attention or surgery.

Achilles tendon rupture injury isn’t a career-ending injury but if not properly treated it could affect the progression of a player, and the healing process takes up to three weeks or more depending on how active the player involved is in terms of his training.

Knee cartilage tear is a strong, fibrous tissue that covers the surface of the joints preventing it from damaging and it reduces friction when bones glide over each other. The cartilage supports the weight when moving ensuring that the weight is distributed evenly across the knee joints when they bend.

A torn knee cartilage is common in football and it usually happens when a player takes a blow to the outside of his knee or through bending the knee joint or twisting it. If the cartilage is twisted sharply the thighbone rolls over the shinbone and causes a tear with excruciating pain.

When footballers sustain KCT that part of the joint got swollen and there would be restrictions of movement in the joints part. Knee cartilage tears occurs during a bad tackle or through a bad fall which leads to overexerting the knee joints over a long period of time.

The healing process of the injury takes up to a month before a player can fully recover to full fitness for a proper action of football again.

Hernia and groin strains are common in football and it usually occurs in the pelvic region of the body which subjected it to stress during kicking, sprinting, and turning.

Hernia groin strains are caused by an overextension of the adductor muscles of the inner thigh and when picked up by a player it comes with excruciating pain during movement.

The recovery time depends on the seriousness of the strain, the mild groin strains heal quickly while the severe ones take several weeks with the proper attention of a professional physiotherapist.

Metatarsal bones are a group of five bones that are located between the middle of the foot and toes. It gives the foot the characteristics arch which enables the body to transfer weight from the toes to the metatarsal bones when walking.

Injuries occur to the metatarsal bones in a different way but one of the most common causes is direct trauma resulting from a blow, stamp, kick, overextension, or extreme stress to the foot.

David Beckham once picked up a metatarsal bones fracture before he retired that almost ruled him out of the 2002 World Cup when he was roughly tackled by former Argentina’s midfielder Aldo Duscher against Deportivo La Coruna.

Metatarsal injury isn’t regarded as a career-threatening injury, however, if not well treated it could potentially have a lasting effect on the player, and the healing process takes between four to eight weeks for it to be properly healed. 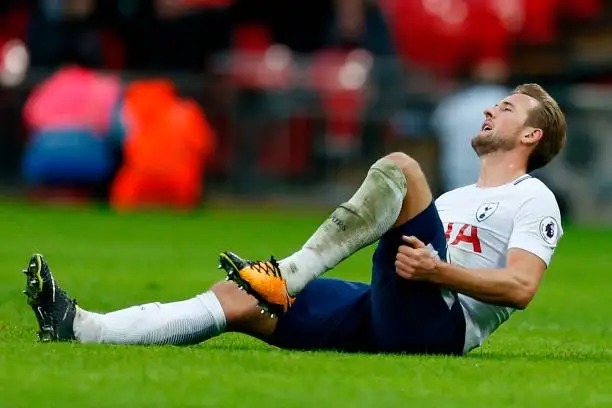 When a player strains his rotator cuff it could either be mild or severe and when such happens that injured part could be bursitis, tendinitis, or strains, which are the common areas that often get injured. Symptoms of rotator cuff strains usually include pain that develops frequently in the shoulder and radiates down to the arm.

The minimum time for recovery from rotator cuff strains is generally two to four weeks, but in a case where the rotator cuff is stubborn with frequent swelling and inflammation, it takes several