The Night that Nigerians celebrated a football club (Part 2)

THE NIGHT THAT NIGERIANS CELEBRATED A FOOTBALL CLUB (PART TWO) In 2004, Enyimba's CAF champions league title defence could be summed up in the mantra of one of England's famed sides, Tottenham Hotspurs, "TO DARE IS TO DO."

After their first triumph in 2003, the People's Elephant set out to do what no club in the continent has done since the competition was remodeled; retain the title. Enyimba dreamed, and dared to do it.

It was a tall dream; one that was doubted by most people. Despite their success the previous year, most Nigerians thought that the first triumph was a fluke. There were doubts that the Elephants could retain the title; a feat that none of the powerful clubs from Northern Africa had achieved. Those doubts were fueled when the Aba giants sacked Kadiri Ikhana, the coach who won them their first title, and replaced him with a relatively inexperienced coach in Okey Emordi. Certainly, a team seeking to achieve such lofty goal wouldn't dare to do take such decision. Yet, Enyimba did. However, the good news was that majority of the players who was the first title were still with the team, and a few quality players were also added. The squad was still strong in terms of playing personnel. All they needed was a good tactical map to navigate the tournament and get to their dream land. The chief financier of the club, Governor Orji Uzor Kalu didn't relent in financing the team, and the chairman, Felix Anyansi-Agwu got more involved in the politics around the competition. The team was well-equipped in every ramification. Coach Okey Emordi like his predecessor brought stability to the team. Inundated with confidence, the team set out to rewrite history. They sail through the qualifying rounds, smoothly. And were placed in group A that comprised of Etoile Du Sahel of Tunisia, African Sports of Ivory Coast, and Bakili Bullets of Malawi. The defending Champions scraped through the group finishing second behind group winners, Etoile Du Sahel. In the semis, they met another Tunisian giant, Esperance and after two meetings that ended 1-1 on aggregate, the Nigerian side won 6-5 on penalties to qualify for the final. The dream was almost completed. Their confidence grew. Their expectations and that of Nigerians were high. Nigerian football family had prayed for just one CAF champions league title just to break the jinx (which was achieved in 2003), and suddenly, they were in line to win a second title. The gods of soccer were being gracious. The NFA led by Taiwo Ogunjobi had done a good job in supporting the team technically and otherwise just like he did the previous year. Everyone pulled together to win it again. Nigerians put aside ethnic and religious sentiments as they all sought to taste victory.

The first leg of the final was in Sousse. The Tunisians won 2-1. With that scoreline, Nigerians were elated. Having an away goal against a formidable side like Etoile was precious. The cup was the Elephants' to lose. All they needed was just a goal, and then stop the Tunisians from scoring. It looked easier. 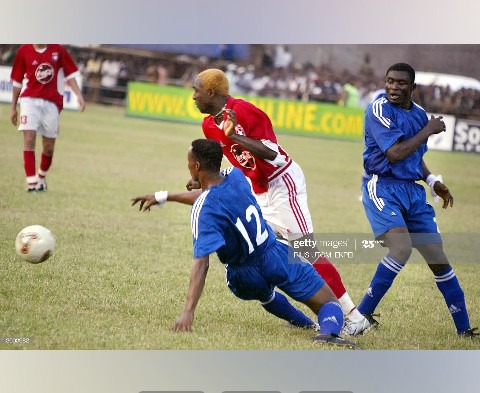 In the second leg was on 12th December, 2004 at the newly constructed Abuja stadium after the People's Elephant were estopped from playing the game in Aba due to the substandard nature of the facility. The People's Elephant won the game by the same scoreline that they lost to the North Africans. And so the game went straight into penalties. It was a nerve wrecking game. During the competition, one of Okey Emordi's tactical brilliance was the taking off Enyimba's number one goalkeeper, Vincent Enyeama for the number two, Dele Aiyegnuba whenever the game went to penalties. He did same in the final as the game entered its closing stages. The spirit of oneness in the team was seen at the way the two goalkeepers exchanged duties; they hugged each other and whispered into each other's ears. It was a sign of encouragement and the will to win. They all had one goal which was to achieve glory, not personal glory, but that of the team, and the nation. One notable fact about the two goalkeepers on that day was that one had scored during the game (Enyeama scored from the penalty spot to give Enyimba the lead in the first half) while the other saved one of the Tunisians' penalties. The two played crucial roles in the victory. In sum, the attitude of every player in the team was eloquent of their believe that a victory would have a lasting positive effect on the nation. 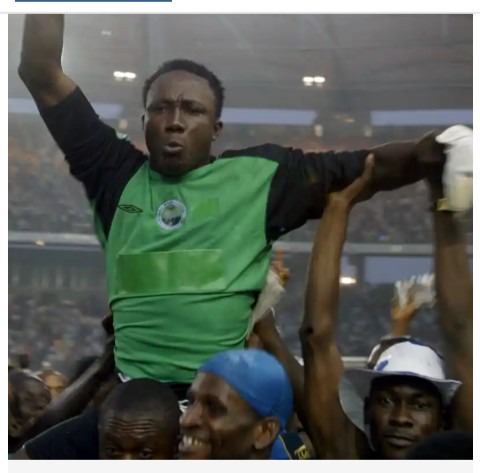 During the spot kicks, Dele Aiyegnugba saved Ben Frej's penalties, and the Elephants scored all of theirs. The last kick was to be taken by Enyimba's captain, Obinna Nwaneri. As he walked towards the 18 yard box to take the decisive kick, he knew that the hope of over 100 million people rested on him. He knew that his name and that of his colleagues would ever be written in gold if he scored. Immortality beckoned. It was a scary burden. But the confident leader, who all through the competition had exhibited good leadership qualities, stood behind the ball, and unleashed a fierce shot that sent Austin Ejide (the Nigerian goalkeeper who manned the Tunisians' goal) the wrong way. As the ball hit the back of the net, Nigerians were sent into ruptures. The dream was achieved. From Aba to Akure, Bayelsa to Bornu, Lagos to Lafia, Kano to Kogi, every city in Nigeria celebrated.

Quite succinctly, the Elephants dared and did it. By that victory, they become the greatest Nigerian football club team ever assembled. They cemented their status as one of the greatest clubs in Africa. It was another victory that showed that despite our struggles as a nation, football will always be one thing that reminds us that we are one nation, and will always rekindle in every of us the spirit of nationhood.