According to Gary Neville, Sir Alex Ferguson would use two up top and a small, aggressive midfield to stop Manchester United's current bad run. 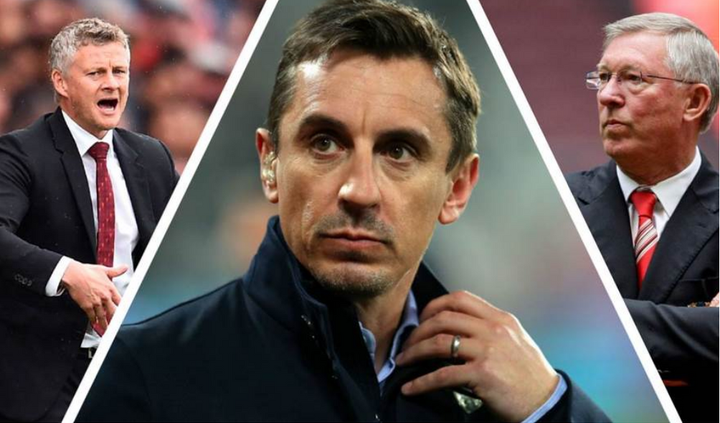 Manchester United lost to Young Boys in the Champions League, were eliminated from the Carabao Cup by West Ham, and have only one point from a possible nine in Premier League games against Aston Villa, Everton, and Leicester City, two of which were played at Old Trafford.

Their bad trend continued at the King Power Stadium, where they were trounced 4-2, putting more pressure on Ole Gunnar Solskjaer, whose starting selection – and the team's balance – was questioned.

"I'm a big fan of Cavani. What I'd do is put Cavani and Ronaldo up top, play two up front, and play a narrow midfield four.

"I always recall Sir Alex putting Nicky Butt in midfield alongside Roy Keane when we were in difficulties at United."

"He'd play a narrow four with Scholes just off to the left and tuck him in a bit, Becks to the right – or maybe Darren Fletcher to the right – and leave the two strikers up knowing they'd score."

"I know it sounds simple, but when you're going through a tough moment, you don't want instructors yelling at you about high-end tactics and crap." Simple messages are all you need. "Football players want messages that are plain and straightforward."

With Bruno Fernandes, Paul Pogba, Scott McTominay, and Fred potentially playing in a narrow midfield four, United have the personnel to do something similar now.

"I think the idea of United working on something really simple for the next month is that 4-3-3 that they play," Neville continued, "but they're going to have to work a lot harder this week and mentally change their mindset to: we're going to be tough to beat." We're not going to let Liverpool come to Old Trafford and do anything they want to us on the pitch next Sunday.

"This week in training, just get your shape right. Make sure you're in good defensive shape. Pogba, Matic, Sancho, Greenwood, and Ronaldo, I don't believe, don't know how to get in condition. Yes, they do. And that is something Ole and the coaching staff must concentrate on in the coming days.

"Get them defensively in shape, then the goals and football will follow; the foundations must be laid first." And they're nothing near good enough out of possession right now, and that's the focus point."