Meet The First Black Man To Qualify His Team For UEFA Champions League. He Is A Nigerian.

By NurseAdaku (self media writer) | 2 years ago 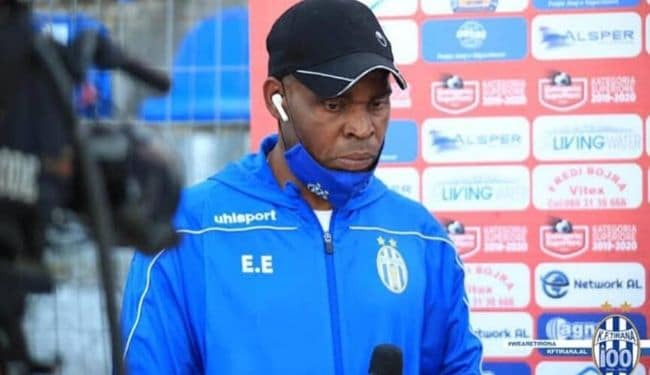 Egbo Ndubuisi Emmanuel a former super eagles goalkeeper and manager of an Albanian club; Tirana has made history by becoming the first African coach to qualify a team for the UEFA champions league.

Egbo, born in 25 July 1973 played as a goalkeeper during his professional career. He represented the national team where he had 12 match appearances including 2000 and 2002 African cup of Nation tournament.

Club wise, he played for both local and international clubs. He began his professional career with Nigel Vasco in 1993. He also played for Julius Berger and NEPA before joining the Egyptian league where he spent three years with El Malsory. Following the resignation of Julian Almtaj in December 2019, Egbo was appointed the manager of Tirana when the club was 8th on the table.

Egbo led FK Tirana to their 25th Albanian top flight league title over the weekend after they defeated Flamutari 2-0 earning his side a spot in the UEFA champions league first qualifying round.

Nigerians are breaking records around the globe. Goodluck to Mr Egbo in his managerial career.

Do you think he has can prove his worth in the world? Let's have your thought.

Content created and supplied by: NurseAdaku (via Opera News )