"I can watch him all day without getting bored " Jay jay okocha, a true legend.

Just a short story about a legend.

Born in Enugu, Nigeria on 14 of August, 1973, his full name is Augustine Azuka Okocha, He is one of the most successful footballers in Nigeria and his net worth is $15 Million dollar. After the adventure in Paris, his football life continue when he landed in England, joining Bolton in the 2002-2003 seasons, he caused fever throughout England, although these football fans have seen many dribblers like him on the pitch, but that of Jay Jay Okocha is just exceptional.

Trained under the coach Sam Allardyce, Bolton become a night mare for most of the English giant were they made all other big teams very uncomfortable. Okocha gain the trust of Sam Allardyce of Bolton then and was handed the captain armband and played the No 10 position that he has always cherishes, almost every white shirt of the supporters have the word Jay Jay on it, he was so loved by the fans. Sam Allardyce praising the former PSG midfielder in his words saying “I like the techniques and the way he uses the ball, I can watch him all day without getting bored Okocha’s way of dribbling is unique, no other player can do it, at 33 years old, the Nigeria legend came to Qatar sc and then Hull city he retired in 2008.

Going to the National team, Jay-Jay was one of the most important players in the team, Nigeria won the 1994 African cup of Nation against Zambia in Stade el Mehzah and the Olympic in 1996 at Atlanta.

In 2004 Nigeria was unable to play in the CAN final , Okocha still won the title of the best player in the tournament, in that same year he was selected by the king of soccer, Pele to be on the list of 100 greatest players of all time.

The skillful No 10 went to 3 world cups with his team mates, unfortunately, the best he and his teammate could do is to reach the round of 16 at world cup 1999, in 2006 Okocha announce his retirement from National team with 14 goals in 75 appearances. 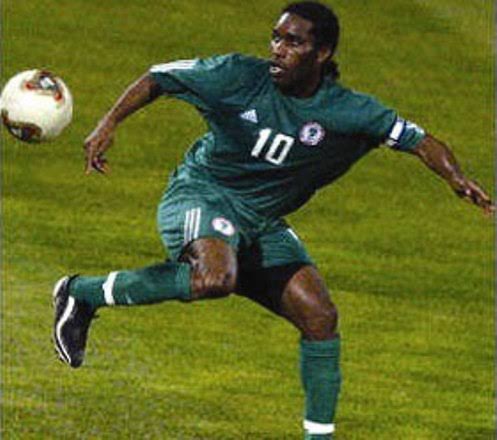 People want to always see Okocha play despite the growth of football and the change of tactics in football, though not ranked among the players with most titles, but no matter what the fans of Frankfurt, Fenabache, P.S.G, and Bolton Wanderers will always love him, and to them he is always a legend.

What a legend he is. Content created and supplied by: Emmadongo2020 (via Opera News )