Arsenal Tattoo Ideas, Designs, Images, Sleeve, Arm, Quotes & Football! It’s not always easy to get good ideas for Arsenal tattoos. Here we try to give you some Arsenal tattoos ideas by showing you different football design ideas of Arsenal tattoos.

Pictures And Images Of Arsenal Tattoos With The Old Logo 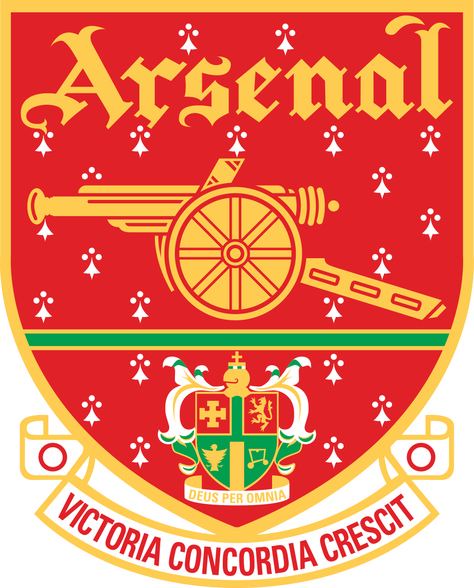 As you can see, the older Arsenal crest comprised of the smaller cannon in the centre with a yellow text. In 1949, the new crest was designed by Bob Wall and Jack Crayston displaying the new motto at the foot of the logo.

This is one of the classic designs but if you want the oldest and first Arsenal logo, check below – 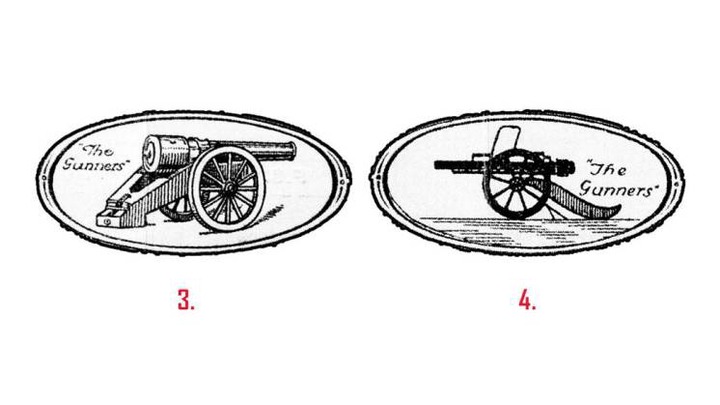 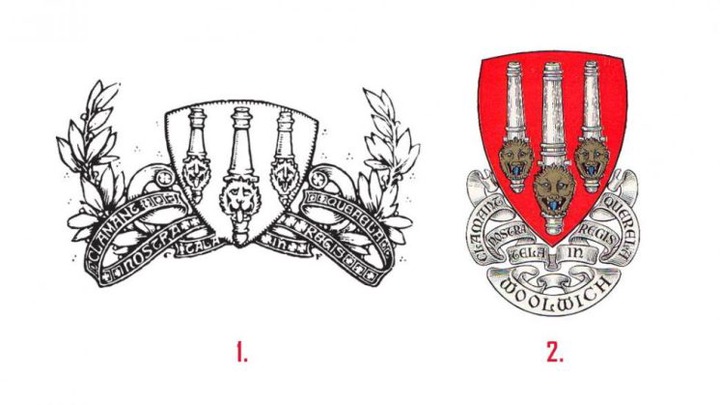 Here you can see several images and pictures with Arsenal tattoos on the back: 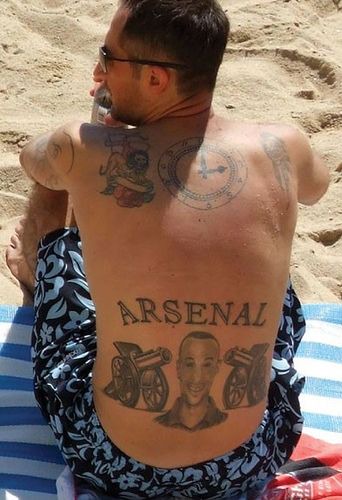 Here you can see several images and pictures with Arsenal tattoos on the sleeve:

Perhaps you would like to take inspiration from our very won, Lucas Torreira. Or you can browse through a few of the ideas below:

How about this one wrapped around your forearm? 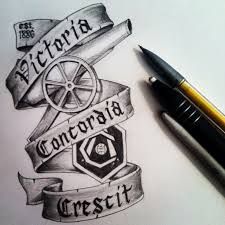 Or this one on the inside of your bicep? 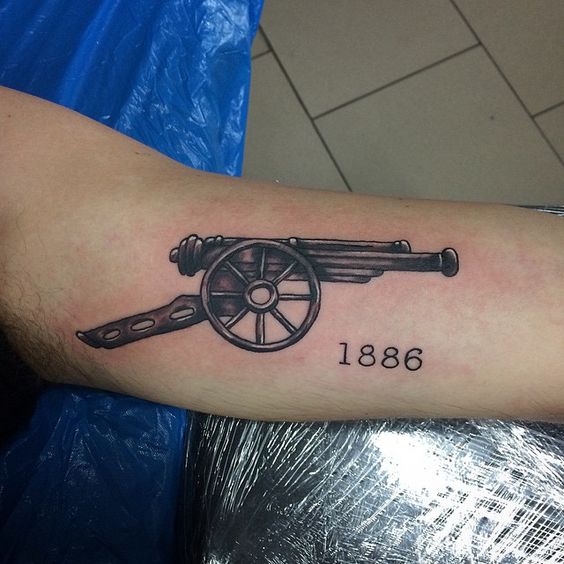 Our boy, Hector Bellerin is a fan of the sleeve tattoo as well! Here take a look: 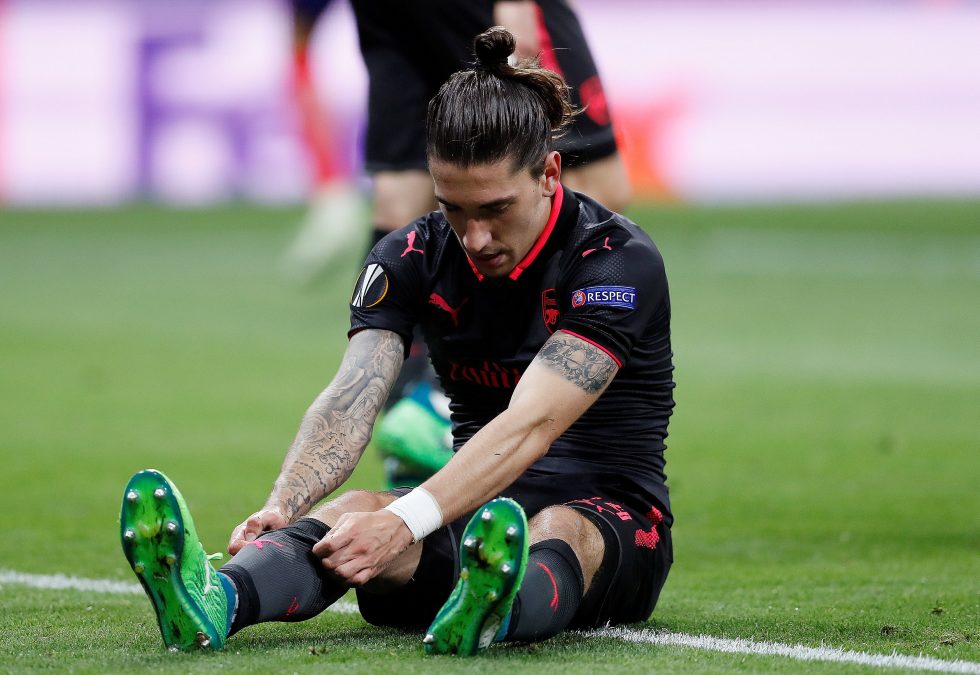 Here is a great Arsenal football tattoo in a sleek caligraphic font. 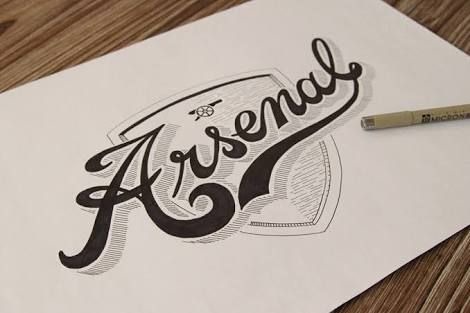 Here are some designs for Arsenal tattoos: 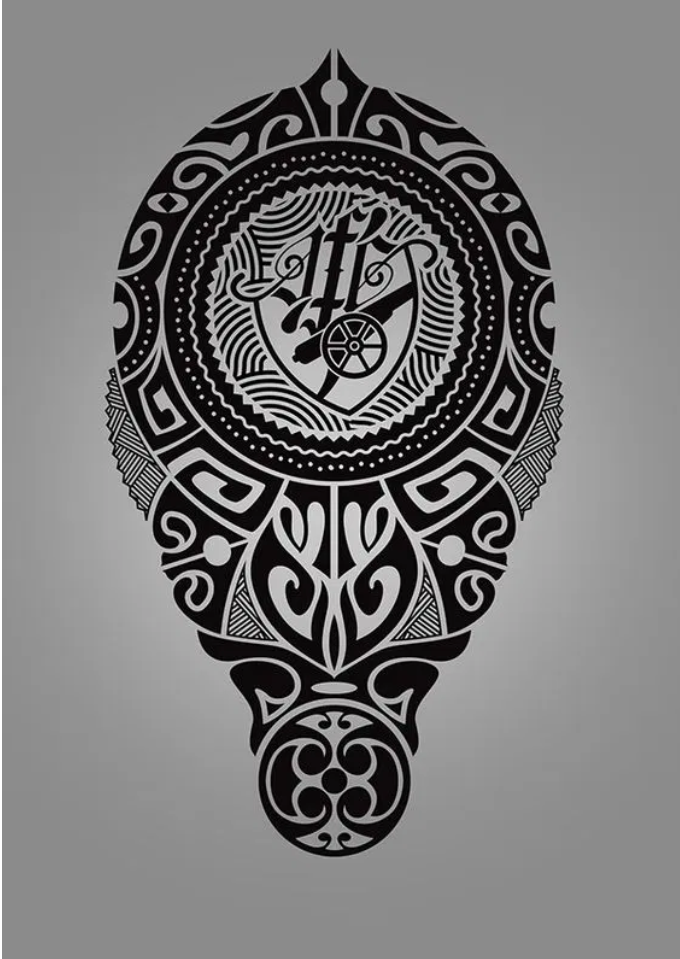 Here you can see several images and pictures with Arsenal tattoos on the arm: 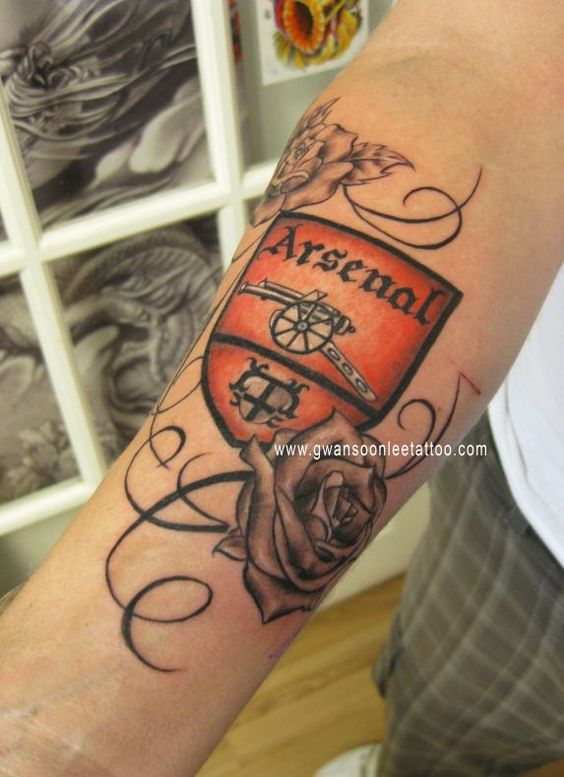 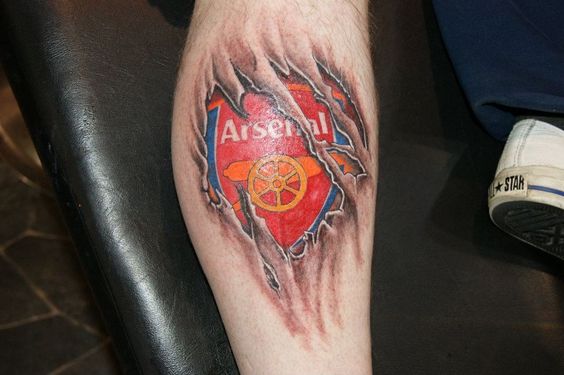 Here you can see several images and pictures with Arsenal tattoos on the calf: 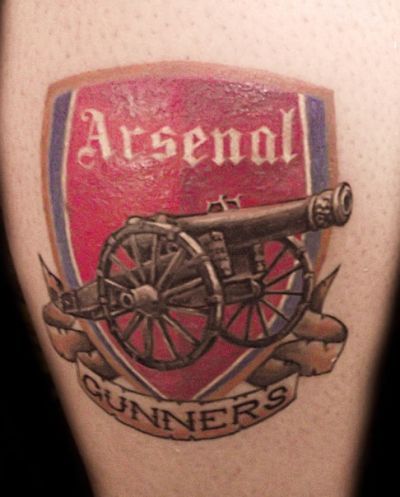 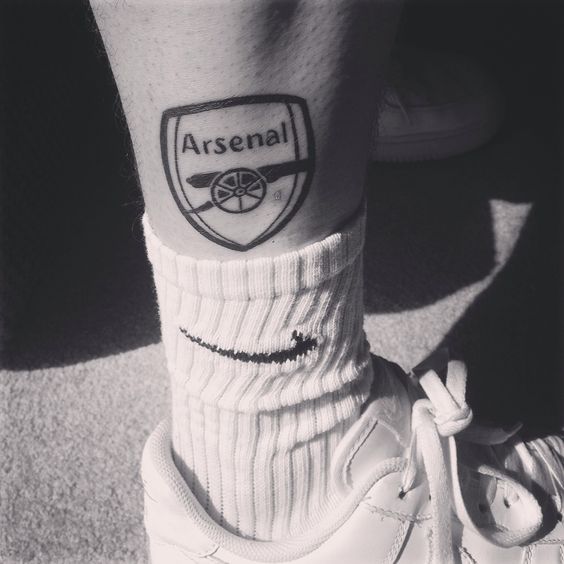 Here you can see several images and pictures of Arsenal tattoos with quotes:

It was said by the one and only, legendary Gunner, Tony Adams aka, Mr. Arsenal. 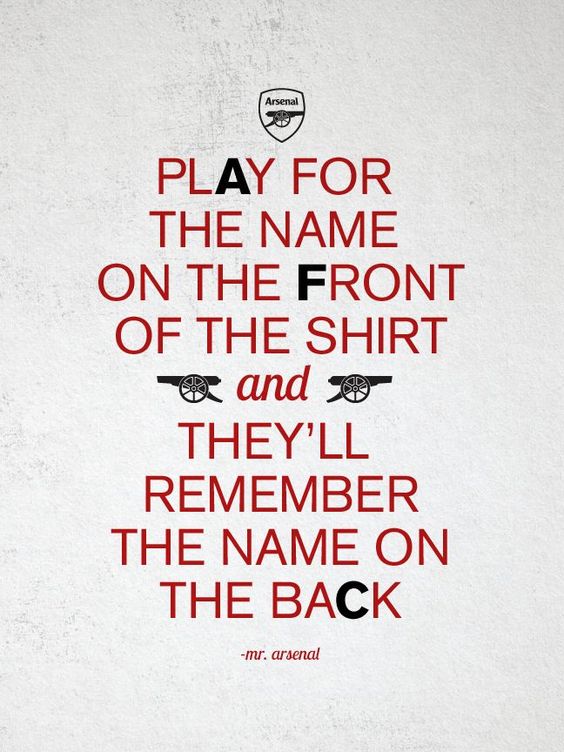 It is Arsenal’s motto and is ingrained into the club’s crest. Over the years there have been plenty of variations of the translation from Latin but all of them roughly mean the same, which is “Victory Grows Through Harmony”.

It is believed that the motto was created by the former editor of the Arsenal programme, Harry Homer also known as the “Marksman”. While penning down the final programme of the 1947-48 season, he was quoted to have come up with the idea. He decided to put it to the board who accepted it and put on print immediately. 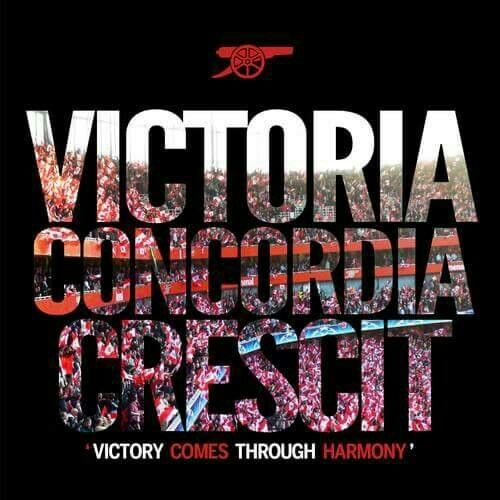 Arsenal tattoo quotes: “He is not bigger than Arsenal but Arsenal are bigger because of him”.

To pay homage to the one man who lead us for 22 years, Arsene Wenger. He also is the most successful manager in the club’s history. Some Arsenal Tattoos Of Arsenal Players

Here we have tattoos of different Arsenal players both former and current dedicated to them: 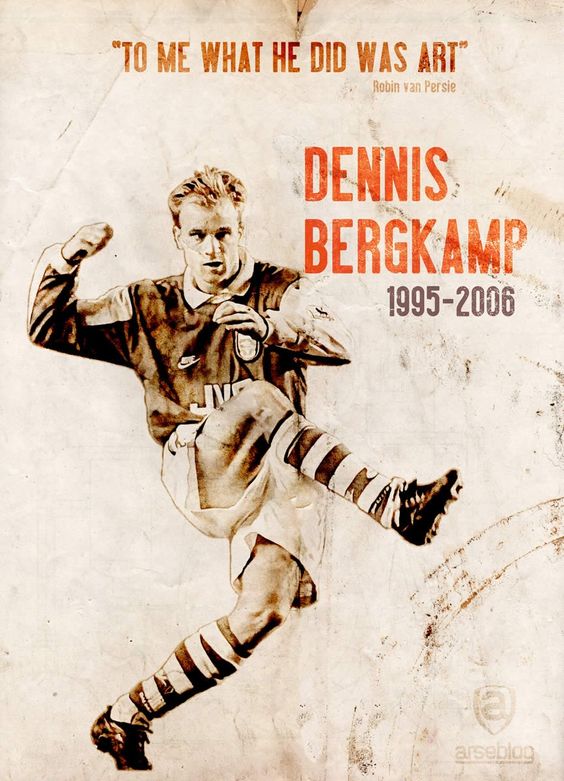 This tattoo is dedicated to obviously Arsenal legend, Dennis Bergkamp. The quote on the top by Robin Van Persie is a very true derivation of what the man stood for in the sport of football. It is only a small gesture to get his picture inked in the form of physical art. 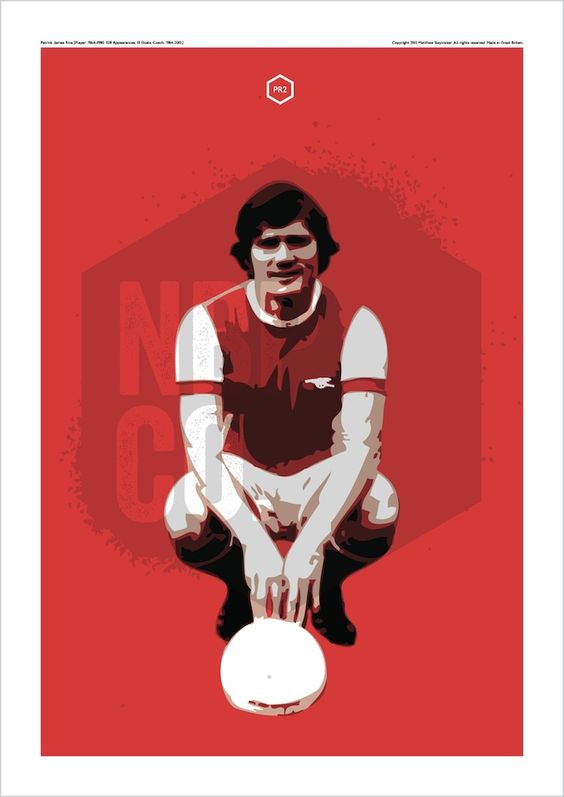 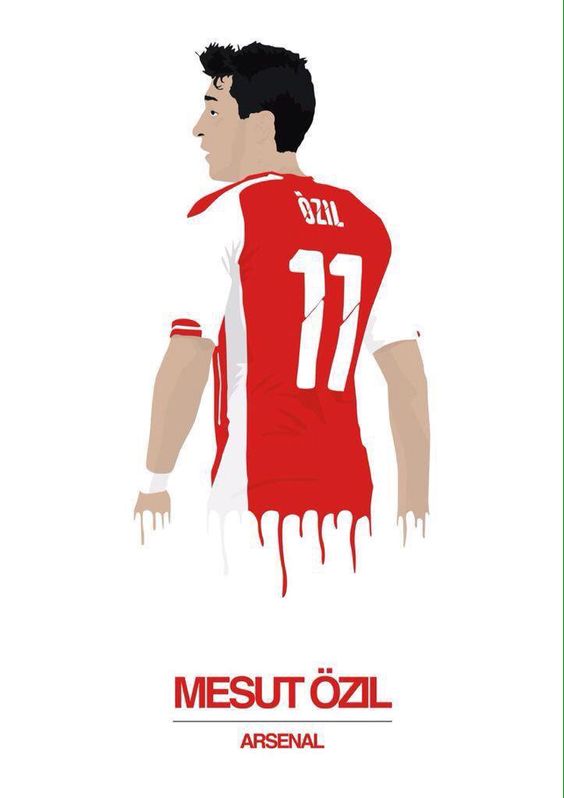 Not too bad an idea to get the Ozil tattoo on your body especially with the ink dripping down on the lower end. Just make sure to change the jersey number to 10!

Here are images of a few Arsenal players with tattoos. Athletes are often seen sporting graffiti all over their bodies and Arsenal players are no different to the trend. 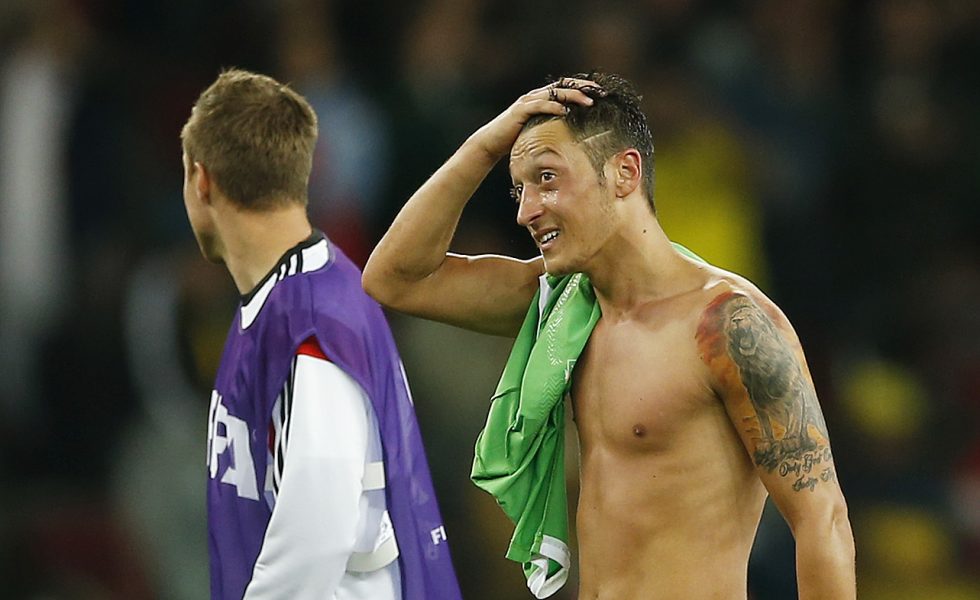 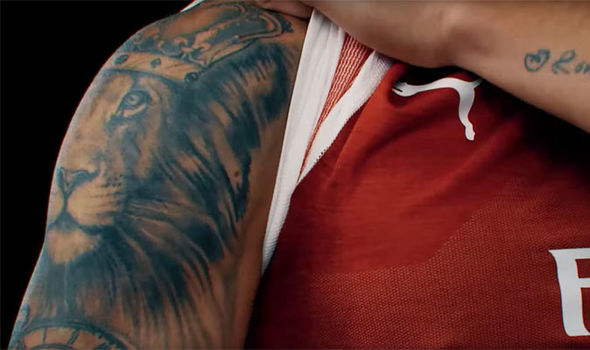 Arsenal’s new Uruguayan midfielder who signed from Sampdoria in the summer of 2018 believes the body art sums up many different things about him.

When asked about what it means, he said, “I just had it done because I liked it. It’s true that a lion represents strength and the spirit we Uruguayans have inside, but I am also a tattoo lover. I liked this tattoo from the moment I saw it.”

“Yes, I chose it for the strength that is in it. It also represents what I am on and off the pitch and my family. This tattoo puts many things together.”

Former Arsenal player, Thierry Henry has filled up both his arms with tattoos which are reminiscent of historical structures in the New York, United States of America after playing for the New York Red Bulls towards the end of his playing career.

They range from the Empire State Building, the Statue of Liberty, the streets of New York and his daughter, Tea. The tattoos understandably have been done up by BangBangNYC who have worked with Justin Bieber, Rihanna and Adele.

Which Arsenal tattoos are your favourite? The ones with the club motto in bright red is my favorites.