Chris Jericho Takes Massive Shots At NXT On AEW Fight For The Fallen, Calls Himself The 'Demo-God' 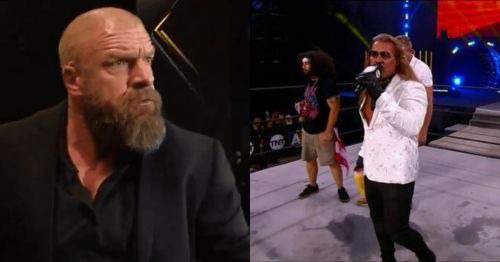 AEW and WWE have both taken shots at each other in their unique ways, but Chris Jericho took the Wednesday Night Wars to a whole new level on this week's Fight for the Fallen show.

Le Champion came out for his big announcement, and he was flanked by his Inner Circle teammates, Ortiz, Santana and the returning Jake Hager, who was back after his suspension.

Jericho cut a promo, and he directly addressed the ratings war with WWE. Chris Jericho called himself the 'King of Ratings' before highlighting the fact that he has never lost in the 18-49 demographic.

Chris Jericho is now 'The Demo-God

The former AEW World Champion went on to call himself 'The Demo-God' as he bragged about his exploits during the battle for ratings superiority.

Jericho then teased the possibility of having a rematch against Orange Cassidy, the man who he defeated on night two of Fyter Fest last week. It was just a red-herring as 'The Demo-God' said that Cassidy doesn't deserve a rematch as he already beat him.

Jericho poured some orange juice on the mat as Cassidy's music hit. Orange came out and made the thumbs down gesture, after which the Inner Circle got drenched in orange juice. The segment ended with a livid Jericho trying to go after Cassidy, only to get stopped by his Inner Circle buddies.

NXT got the upper hand in the overall viewership figures for the past two weeks; however, both nights of Fyter Fest pulled in more viewers in the 18-49 demo against The Great American Bash.

Tony Khan ruffled quite a few feathers in the aftermath of the shows as he claimed that the 18-49 demo is what mattered the most to him.

Chris Jericho also highlighted the importance of attracting younger viewers on social media, and he took it one step further on Dynamite by christening himself as 'The Demo-God'.

The feud between Orange Cassidy and Chris Jericho is far from over, and we should also expect Jericho to continue to hype up the ratings war in the upcoming weeks.

Will NXT respond to Jericho's direct barbs? We'll have to wait and watch.