King Corbin (AKA Baron Corbin) and Adam Pearce have taken shots at each other in an explosive exchange on Twitter.

The former Mr Money in the Bank and the current number one contender to Roman Reigns' WWE Universal Championship have traded insults, after Pearce posted an update regarding The Head of the Table's conduct on SS

Corbin, however, clearly wasn't impressed and instructed Pearce to " take his a** whipping like a man. " On top of this, he brought Otis into the equation to rub salt into the wound.

"Nahh take your ass whipping like a man. I still blame you for giving us Otis at survivor series."

Not one to back down, Pearce responded to King Corbin's jibe, requesting that the "King" share his opinions with Pearce in person, as opposed to over social media.

"Feel free to come look me in the eye and have this conversation, “King”."

Adam Pearce might not face Roman Reigns at Royal Rumble Whether or not there may be genuine bad blood between Corbin and Pearce, or whether this is simply the work of two WWE Stars trying to build hype towards a potential future match up, remains to be seen.

While Adam Pearce is currently scheduled to face The Tribal Chief for the Universal Championship at Royal Rumble, after Reigns cost Shinsuke Nakamura the victory in the Gauntlet Match on SmackDown, all may not be what it seems.

A recent report from Dave Metlzer on Wrestling Observer Radio highlighted that there are two other names who may end up facing Roman Reigns at Royal Rumble instead of Adam Pearce.

"It could end up with Nakamura or even Kevin Owens against him [Roman Reigns] and it could change. I kind of think it will."

Either Shinsuke Nakamura or Kevin Owens replacing Adam Pearce would make complete sense, given they would be able to offer much more in the way of a challenge to the reigning Universal Champion. 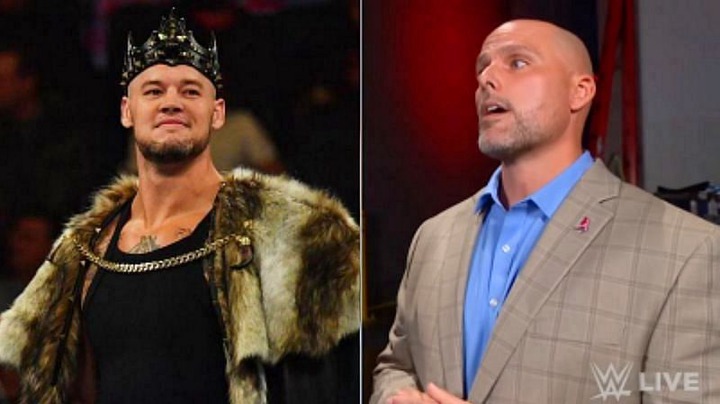