Chelsea team news: Injuries and suspension list ahead of a match against Liverpool

Chelsea have the chance to ensure a Champions League place for next campaign with a game to spare when they visit champions Liverpool on Wednesday night.

Success at Anfield would leave Frank Lampard's side four points clear of fifth place heading into the final day of the season, but anything less than a win would leave them with work still to do.

The Blues go into the game off the back of a 3-1 victory over Manchester United which sent them into the FA Cup final, but Liverpool have not mistakenly lost a home league game at Anfield since April 2017

Here, Chelsea rounds up news on injury, and suspension ahead of the contest. 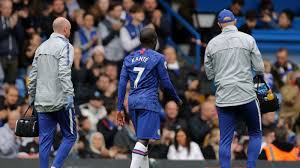 N'Golo Kante was ruled out of Sunday's FA Cup semi-final as he continues to nurse a hamstring injury, making him a major concern for this one too. Billy Gilmour's breakthrough season at Chelsea has been halted by a knee injury which required surgery, ruling him out for the foreseeable future. It is now nearly seven years since Marco van Ginkel last played for Chelsea and virtually two years since the injury-plagued midfielder played in a competitive game of any kind, yet he just signed a new contract with the Blues to extend his stay for one more year.

Chelsea have no suspended players for this match.